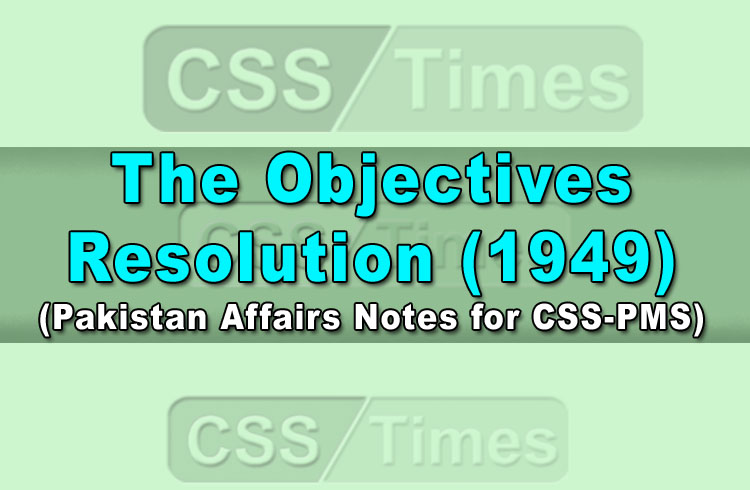 The Objectives Resolution was the first constitutional document that proved to be the ‘foundation’ of the constitutional developments in Pakistan. It provided parameters and sublime principles to the legislators. It made the constitution-making process easy task setting some particular objectives before them that would be acceptable to the people of Pakistan who had suffered a lot under the Hindu-dominated majority. The Resolution was moved by Liaquat Ali Khan, the then Prime Minister of the Islamic Republic of Pakistan, and approved on March 12, 1949.

The first Constituent Assembly came into existence under Indian Independence Act 1947. The elections were held in July 1946 to decide the destiny of the All India Muslim League (AIML)’s claim that it is the only representative party of the Indian Muslims that desire separate homeland, Pakistan. The members from the districts that became part of Pakistan were declared members of the Constituent Assembly. The number of such members was 69. It increased to 79 after the 1947 when some states joined Pakistan and then increase in the population. There were two major parties, Muslim League and Congress in the Assembly at that time. This Assembly had dual functions to perform.

Features of the Objectives Resolution

The Resolution declared the sovereignty of God as the distinctive political philosophy. The Western democracy gives the notion that sovereignty lies in the people but this Resolution is important having the concept of the sovereignty of God. It clarified that people would utilize powers gifted by God so they would have to work within the limits prescribed by Him. The exercise of the powers is a sacred trust. The representatives of the people of Pakistan will manage the affairs under the universal ideology of democracy, freedom, equality, tolerance, and social justice with the spirit of an Islamic framework.

The Resolution pledged to give the due respect and rights to the minorities, backward and depressed classes in the benign society of Pakistan. Their rights, interests, religion and culture were not confuted.

It’s important that the Resolution promised the federating units for due powers, autonomy and territorial integrity.

The major objection by the Non-Muslims was that the government was trying to mix the religion and politics that was against the spirit of democracy. The non-Muslims objected on the

‘Sovereignty of Allah’ and minorities’ rights, saying it would promote inequality in the society. They were also of view that Shariah was not adequate for the modern time. They feared that it would encourage the religious extremists to work for the establishment of a ‘theocratic state.’

The Objectives Resolution is a basic and primary document of the constitutional history of Pakistan. It is a framework that provides mechanism to achieve goals for a better life of the people of Pakistan. It’s important that it embraces centrality of Islam to polity sustaining their links with the pre-independence period. The AIML leaders were modernist Muslims not in favour of an orthodox religious state. Therefore, they selected the middle way abiding by the Islamic laws and the international democratic values. The Resolution remained ‘Preamble of all the constitutions due to its importance.