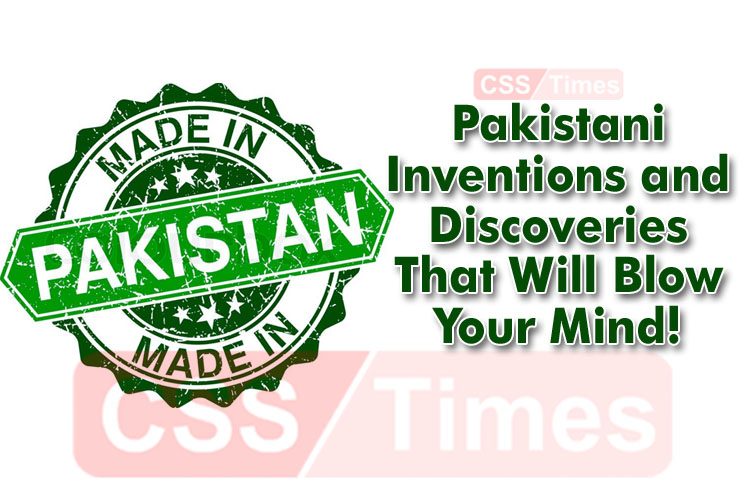 This article lists inventions and discoveries made by scientists with Pakistani nationality within Pakistan and outside the country.

In 2013, a Pakistani firm invented a new formula to make fertilizers that cannot be converted into bomb-making materials. The firm, Fatima Fertilizer, had succeeded in making non-lethal alternatives to ammonium nitrate, a key ingredient in the fertilizers it makes. Fertilizers with ammonium nitrate, however, can easily be converted into bomb-making ingredients. This invention was praised by the Pentagon. “Such a long-term solution would be a true scientific breakthrough,” US Army Lieutenant General Michael Barbero, the head of the Pentagon’s Joint Improvised Explosive Device Defeat Organization, said in a statement. After this invention, CNN reported that the United States and Pakistan reached an agreement to jointly make fertilizers with non-explosive materials. But diplomatic sources told Dawn that an agreement could only be reached after the new material is tested. The sources said that US experts would soon visit Pakistan for testing the new material with experts from the Fatima Group, Pakistan’s major fertilizer manufacturer.

Dr. Naweed Syed, a specialist in the field of biomedical engineering and member of the medicine faculty at the University of Calgary, became the first scientist who managed to “connect brain cells to a silicon chip”. The discovery is a major step in the research of integrating computers with human brains to help people control artificial limbs, monitor people’s vital signs, correct memory loss or impaired vision.

Dr Samir Iqbal, an associate professor in the Electrical Engineering Department at the University of Texas at Arlington, developed a novel cancer cell detection method that improves early diagnosis through a tool that tracks cellular behavior in real time using nanotextured walls that mimic layers of body tissue.

Discovery of electroweak interaction by Abdus Salam, along with two Americans Sheldon Lee Glashow and Steven Weinberg. The discovery led them to receive the Nobel Prize in Physics.

Abdus Salam who along with Steven Weinberg independently predicted the existence of a subatomic particle now called the Higgs boson, Named after a British physicist who theorized that it endowed other particles with mass.

The development of the Standard Model of particle physics by Sheldon Glashow’s discovery in 1960 of a way to combine the electromagnetic and weak interactions. In 1967 Steven Weinberg and Abdus Salam incorporated the Higgs mechanism into Glashow’s electroweak theory, giving it its modern form.

In 2015 Pakistani researchers developed a solar powered mobile phone network. The network according to them is useful for instances when regular services are disrupted such as earthquakes and floods.

Abdullah Soomro invented Flashpack, a power bank that is able to charge fully in just 14 minutes

The Ommaya reservoir – a system for the delivery of drugs (e.g. chemotherapy) into the cerebrospinal fluid for treatment of patients with brain tumours – was developed by Ayub K. Ommaya, a Pakistani neurosurgeon.

Two medical devices – a pleuroperitoneal shunt and a special endotracheal tube to supply oxygen during fiberoptic bronchoscopy in awake patients – were invented by Sayed Amjad Hussain, a Pakistani American doctor from Peshawar, Pakistan. His work made him an inductee into the Medical Mission Hall of Fame.

A non-kink catheter mount was designed by a Pakistani doctor A. K. Jamil. He also developed a simple device for teaching controlled ventilation (A device through which young doctors can be trained on artificial ventilation of the lungs without Operation theater and patient)

Computing A boot sector computer virus dubbed (c)Brain, one of the first computer viruses in history, was created in 1986 by the Farooq Alvi Brothers in Lahore, Pakistan, reportedly to deter unauthorized copying of the software they had written.

A Software simulation based on blast forensics designed by Pakistani computer scientist, Zeeshan-ul-Hassan Usmani, that can reduce deaths by 12 per cent and injuries by seven per cent on average just by changing the way a crowd of people stand near an expected suicide bomber.

The Sagar veena, a string instrument designed for use in classical music, was developed entirely in Pakistan over the last 40 years at the Sanjannagar Institute in Lahore by Raza Kazim.

The Human Development Index was devised by Pakistani economist Mahbub ul Haq in 1990 and had the explicit purpose “to shift the focus of development economics from national income accounting to people centered policies”.

A team headed by Professor Sohail Khan, a Pakistani researcher at Loughborough University designed a clever lavatory that transforms human waste into biological charcoal and minerals. These can then be used as fuel or a form of conditioner for soil. It also produces clean water. The invention can lead to community-led total sanitation in the developing world. The challenge was set by Microsoft founder Bill Gates who wanted to improve sanitation for the poor and combat open defacation in countries where water supply and sewage pipe infrastructure is not widely available.