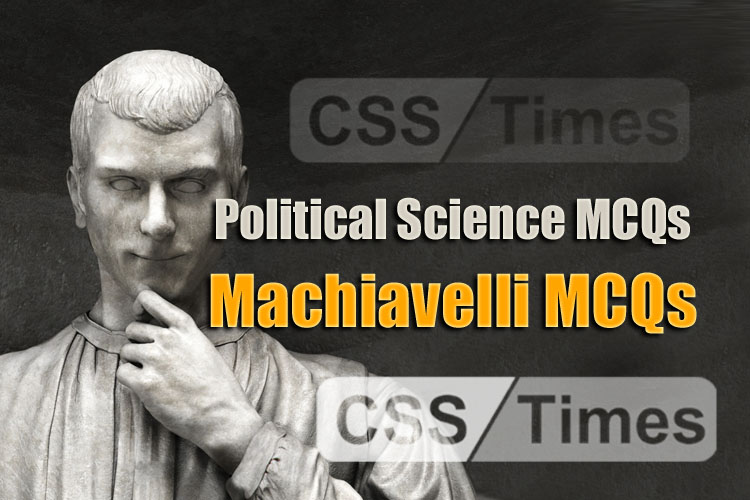 Modern Political thought begins with
(a) Machiavelli
(b) Montesquieu
(c) Mill
(d) None of these
Answer: (a)
Explanation: Machiavelli lays claim to the mantle of the founder of “modern” political science, in contrast with Aristotle’s classical norm-laden vision of a political science of virtue.

Separation of Ethics and Politics was the principle notion in the philosophy of: (CSS-2007)
(a) Lenin
(b) Plato
(c) Machiavelli
(d) None of these
Answer: (c)
Explanation: Although Machiavelli thinks of ethics as essential for the life of the individual and indispensable for the continuity of society and social life, he regards attachment to it as dangerous for the prince and he cautions him (the prince or monarch) against the danger of piety

Answer: (d)
Explanation: He starts writing Discourses on the First Decade of Titus Livy (Italian: Discorsi sopra la prima deca di Tito Livio), a commentary on the first ten books of Livy’s History of Rome in 1513 The Discourses were published posthumously with papal privilege in 1531.

The Art of War is written by: (CSS-2011)
(a) Mao
(b) Machiavelli
(c) Lenin
(d) None of these
Answer: (b)
Explanation: The Art of War (Italian: Dell’arte della guerra) is a treatise by the Italian Renaissance political philosopher and historian Niccolò Machiavelli. Written between 1519 and 1520 and published the following year, it was Machiavelli’s only historical or political work printed during his lifetime, though he was appointed official historian of Florence in 1520 and entrusted with minor civil duties.

Machiavelli’s Art of War echoes many themes, issues, ideas and proposals from his earlier, more widely read works,
(a) The Prince
(b) The Discourses.
(c) Both a & b
(d) None of these
Answer: (c)