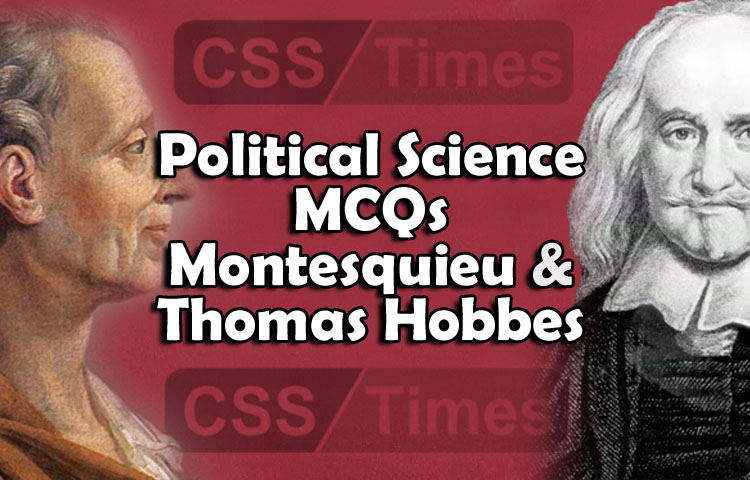 The concept of ‘Separation of Powers’ was given by: (CSS-2001)
(a) Montesquieu
(b) Machiavelli
(c) Bentham
(d) None of these
Answer: (a)
Explanation: The name most associated with the doctrine of the separation of powers is that of Charles Louis de Secondat, Baron Montesquieu. His influence upon later thought and upon the development of institutions far outstrips, in this connection, that of any of the earlier writers we have considered.

Montesquieu by birth belonged to: (CSS-2007)
(a) Germany
(b) England
(c) France
(d) None of these
Answer: (c)
Explanation: Montesquieu was born at the Château de la Brède in the southwest of France, 25 kilometers (16 mi) south of Bordeaux

The concept of ‘Separation of Powers’ was given by:
(a) Montesquieu
(b) Machiavelli
(c) Bentham
(d) None of these
Answer: (a)

The famous book “The Spirit of Laws” written by Montesquieu was published in: (CSS-2010)
(a) 1734
(b) 1754
(c) 1784
(d) 1773
Answer: (d)
Explanation: The Spirit of the Laws (French: De l’esprit des lois, originally spelled De l’esprit des loix; is a treatise on political theory first published anonymously by Charles de Secondat, Baron de Montesquieu in 1748 with the help of Claudine Guérin de Tencin. Originally published anonymously partly because Montesquieu’s works were subject to censorship, its influence outside France was aided by its rapid translation into other languages.

Who among the following is not a proponent of the theory of natural rights?
(a) Thomas Hobbes
(b) John Locke
(c) Thomas Jefferson
(d) Jeremy Bentham
Answer: (d)

“Only the will of the sovereign can be the source of law”. Who said it? (CSS-2001)
(a) John Hobbes
(b) John Austin
(c) Groutious
(d) None of these
Answer: (d)
Explanation: There is no person like ‘John Hobbes’. It’s Thomas Hobbes.

Associations are not persona ficta but real persons existing prior to the State. This view was propounded by:
(a) Hobbes
(b) Hegel
(c) Duguit
(d) Gierke
Answer: (d)

Hobbesian social contract is based on: (CSS-2000)
(a) Desire for peace
(b) Selfishness
(c) Fear
(d) Completion
(e) None of these.
Answer: (a)
Explanation: Hobbes presents his social contract theory in a series of works, the most famous of which is The Leviathan (1651) The state of nature that Hobbes describes is so disturbing that it gives us strong motivation to want to rise above that condition if possible. None of us wants to die violently; we all want decent living conditions; we also carry hopes that we can improve our living conditions through work. But we cannot fulfill any of these desires until we achieve peace, and Hobbes next describes what we need to do to secure such peace.

The father had planned a legal for his son but the son had no inclination towards that. Who was the son? (CSS-2002)
(a) Aristotle
(b) Machiavelli
(c) John Locke
(d) None of these
Answer: (d)

Which of the following is rejected by Hobbes as the foundation of the State?
(a) The view that might is right
(b) Individualism
(c) Rational self-preservation as the ground for social contract
(d) Concept of authorization
Answer: (a)

“The principle of the greatest good of the greatest number was made a hook to be put into nostrils of the Leviathan so that it could be tamed and harnessed to the chariot of utility.” This observation refers to the political theory of:
(a) Hobbes
(b) Hume
(c) Sidgwick
(d) Bentham
Answer: (a)