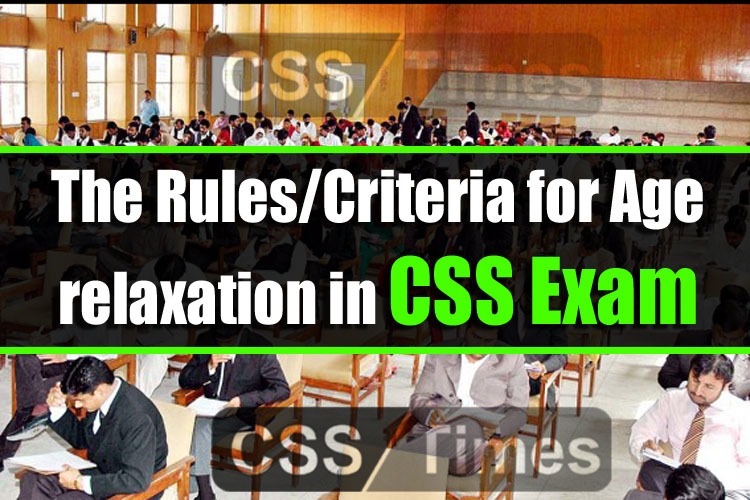 The upper age limit will be relaxed by two years up to the age of 32 years in respect of :

(a) the candidates belonging to the Scheduled Caste and Buddhist Community subject to production of a certificate (Annex-A of Application Form) to be issued by DC/ District Magistrate in support of their claim.

(b) The candidates belonging to the recognized Tribes who are permanent residents of the areas mentioned-below and whose families have been living in these areas. Such candidates must attach a certificate (Annex-B of Application Form) to be issued by DC/ District Magistrate in support of their claim:

(c) The candidates who are permanent residents of Azad Kashmir Territory, subject to submission of a certificate (Annex-C of Application Form) to be issued by Kashmir Affairs Division, Government of Pakistan, Islamabad..

(d) The candidates who are permanent residents of Gilgit – Baltistan including Gilgit, Diamir, Baltistan, Ghizar and Ghanche, subject to submission of a certificate (Annex-B of Application Form) to be issued by the DC/ District Magistrate.

(e) The candidates who are disabled namely, physically impaired, hearing/speech impaired (deaf & dumb) and visually impaired (blind), subject to submission of certificate of disability issued by the competent authority designated for the purpose by the Federal/Provincial Government.

Check Also: 15 Magical Tips on How to Study for CSS Exams at Home

(f) In Service Government Servants, Armed Forces Personnel, Contract employees, including the Government servants of AJ&K, who possess a minimum of two years continuous Government service as on cut-off date, subject to submission of Departmental Permission Certificate (Annex-E) from the competent authority. Employees of Nationalised Banks, State Bank of Pakistan, WAPDA, Regulatory Authorities, Autonomous bodies and other semi autonomous bodies are not entitled to age relaxation.