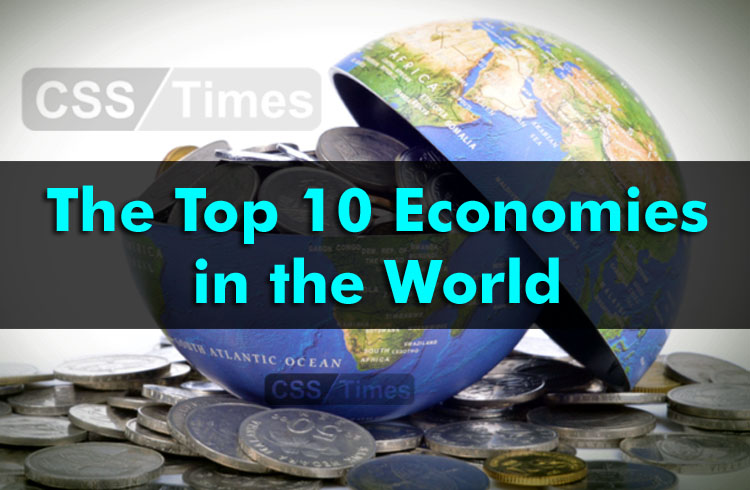 China has transformed itself from a centrally-planned closed economy in the 1970s to a manufacturing and exporting hub over the years. Since it initiated market reforms in 1978, the Asian giant has achieved economic growth averaging 10% annually (though it’s slowed recently) and, in the process, lifted almost half of its 1.3 billion population out of poverty and become the undisputed second-largest economy on Earth. The Chinese economy has already overtaken the U.S. economy in terms of GDP, based on another measure known as purchasing power parity (PPP), and is estimated to pull ahead of the U.S. steadily in the following years. However, the difference between the economies in terms of nominal GDP remains large with China’s $11.8 trillion economy. The Chinese economy has long been known for its strong growth, a growth of over 7% even in recent years. However, the country saw its total GDP growth go down to 6.7% in 2016 and is projected to slow to 6.6% in 2017, and further decline to 5.7% by 2022. The country’s economy is propelled by an equal contribution from manufacturing and services (45% each, approximately) with a 10% contribution by the agricultural sector.

Japan’s economy currently ranks third in terms of nominal GDP, while it slips to fourth spot when comparing the GDP by purchasing power parity. The economy has been facing hard times since 2008, when it first showed recessionary symptoms. Unconventional stimulus packages combined with subzero bond yields and weak currency have further strained the economy Economic growth is once again positive, to about 1% in 2016 and further to around 1.2% in 2017; however, it is forecasted to stay below 1% during the next five years. The nominal GDP of Japan is $4.84 trillion, its GDP (PPP) is $5.42 trillion, and its GDP (PPP) per capita is $42,860.

Germany is Europe’s largest and strongest economy. On the world scale, it now ranks as the fourth largest economy in terms of nominal GDP. Germany’s economy is known for its exports of machinery, vehicles, household equipment, and chemicals. Germany has a skilled labor force, but the economy is facing countless of challenges in the coming years ranging from Brexit to the refugee crisis The size of its nominal GDP is $3.42 trillion, while its GDP in terms of purchasing power parity is $4.13 trillion. Germany’s GDP (PPP) per capita is $49,814, and the economy has moved at a moderate pace of 1-2% in recent years and is forecasted to stay that way.

The United Kingdom, with a $2.5 trillion GDP, is currently the world’s fifth largest. Its GDP in terms of PPP is slightly higher at $2.91 trillion while its GDP (PPP) per capita is $44,001. The economy of the UK is primarily driven by services, as the sector contributes more than 75% of the GDP. With agriculture contributing a minimal 1%, manufacturing is the second most important contributor to GDP. Although agriculture is not a major contributor to GDP, 60% of the U.K.’s food needs is produced domestically, even though less than 2% of its labor force is employed in the sector.

After the referendum in June 2016 when voters decided to leave the European Union, economic prospects for the UK are highly uncertain, and the UK and France may swap places. The country will operate under EU regulations and trade agreements for two years after the formal announcement of an exit to the European Council, in which time officials will work on a new trade agreement. Economists have estimated that Brexit could result in a loss of anywhere from 2.2-9.5% of GDP long term, depending on the trade agreements replacing the current single market structure. The IMF, however, projects growth to stay between 1.5-1.9% in the next five years.

India is the sixth largest economy in the world with a nominal GDP of $2.45 trillion. The country ranks third in GDP in terms of purchasing power parity at $9.49 trillion. The country’s high population drags its GDP (PPP) per capita down to $1,850. India’s GDP is still highly dependent on agriculture (17%), compared to western countries. However, the services sector has picked up in recent years and now accounts for 57% of the GDP, while industry contributes 26%. The economy’s strength lies in a limited dependence on exports, high saving rates, favorable demographics, and a rising middle class. India recently overtook China as the fastest growing large economy and is expected to jump up to rank fourth on the list by 2022.

France, the most visited country in the world, is now the seventh largest economies with a nominal GDP of $2.42 trillion. Its GDP in terms of purchasing power parity is around $2.83 trillion. France has a low poverty rate and high standard of living, which is reflected in its GDP (PPP) per capita of $43,652. The country is among the top exporters and importers in the world. France has experienced a slowdown over the past few years and the government is under immense pressure to rekindle the economy, as well as combat high unemployment which stood at 9.6% in Q12017 (a slight drop from 10% in Q42016). According to IMF forecasts the country’s GDP growth rate is expected to rise over the next five years, and unemployment is expected to continue to go down.

With its $2.14 trillion economy, Brazil now ranks as the eight largest economy by nominal GDP. The Brazilian economy has developed services, manufacturing, and agricultural sectors, with each sector contributing around 68%, 26%, and 6% respectively. Brazil is one of the BRIC countries, and was projected to continue to be one of the fastest growing economies in the world. However, the recession in 2015 caused Brazil to go from seventh to ninth place in the world economies ranking, with a negative growth rate of 3.6% (2016). The IMF expects the economy to grow at 0.2% during 2017, further recovering to 1.7% in 2018 and then to 2% during the next four years. The Brazilian GDP measured in purchasing power parity is $3.22 trillion, while its GDP (PPP) per capita is $15,485.

Italy’s $1.81 trillion economy is the world’s ninth largest in terms of nominal GDP. Italy is among the prominent economies of the Eurozone, but it has been impacted by the debt crisis in the region. The economy suffers from a huge public debt estimated to be about 133% of GDP, and its banking system is close to a collapse and in need of a bailout/bail-in. The economy is also facing high unemployment, but saw a positive economic growth in 2014 (0.1%) for the first time since 2011, which is projected to continue. The government is working on various measures to boost the economy that has contracted in recent years. The GDP measured in purchasing power parity for the economy is estimated at $2.3 trillion, while its per capita GDP (PPP) is $37,905

Canada took over Russia to feature as the tenth largest economy in 2015. It’s $1.6 trillion is expected to touch $1.9 trillion by 2022, maintaining its lead over Russia. Canada has a highly service-oriented economy, and has had solid growth in manufacturing as well as in the oil and petroleum sector since the Second World War. However, the country is very exposed to commodity prices, and the decline in oil prices kept the economic growth under 1% in 2015 (down from 2.6% in 2014). The economy is expected to grow in the range of 1.8-2.0% during 2017-22. The GDP measured in purchasing-power parity is $1.75 trillion, and the GDP per capita (PPP) is $47,771.