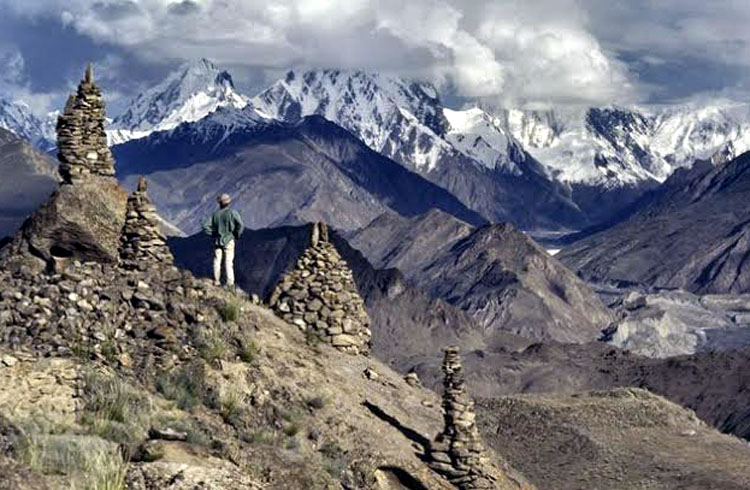 The Karakoram Ranges in the extreme north rise to an average height of 6,100 m. Mount Goodwin Austin (K-2) the second highest peak in the world is 8,610 m and located in the Karakorams.

The Hindu Kush Mountains take off the western side of the Pamir Plateau that is located to the west of the Karakorams. These mountains take a southerly turn and rise to snowy heights. Some of the peaks rise to great heights like Noshaq (7,369 m), and Tirich Mir (7,690 m).

The Koh-e-Safaid Ranges have an east-west trend and rise to an average height of 3,600 m. They are commonly covered with snow. Sikeram, the highest peak in Koh-e-Safaid Ranges rises to 4,760 m. Similarly, the elevation of Waziristan Hills ranges from 1,500 and 3,000 m.

Some rivers flowing in the region have formed passes through which armies, peoples and cultures have moved. Among them, the Khyber Pass is the most important. It connects Peshawar in Pakistan to Kabul in Afghanistan.

The Sulaiman-Kirthar Mountain Ranges extending from south of Gomal River, lie between Balochistan Plateau and the Indus Plains. On reaching the Murre-Bugti Hills, they turn northward and extend up to Quetta. Further south, they meet the Kirthar Mountains, which merge in to the Kohistan area of Sindh. The Sulaiman Mountains rise to an average height of 600 m that decreases southward. Takht-e-Sulaiman (3,487 m) and Takatu (3,470 m) are the highest peaks of the Sulaiman Ranges.

The Baluchistan Plateau is located west of the Sulaiman-Kirthar Mountains. Its western part is dominated by a number of sub-parallel ranges: the Makran Coast Range (600 m), and the Central Makran Range (900 – 1200 m). The highest peak Ras Koh, attains a height of 3010 m

4) The Potwar Plateau and Salt Range

The Potwar Plateau and the Salt Range region are located to the south of the mountainous north and lie between the Indus river on the west and the Jhelum river on the east. Its northern boundary is formed by the Kala Chitta Ranges and the Margalla Hills and the southern boundary by the Salt Ranges. The Kala Chitta Range rises to an average height of 450 – 900 m and extends for about 72 km. The main Potwar Plateau extends north of the Salt Range. It is an undulating area 300 – 600 m high. The Salt Ranges have a steep face towards the south and slope gently in to the Potwar Plateau in the north. They extend from Jhelum River up to Kalabagh where they cross the Indus river and enter the Bannu district and rise to an average height of 750 – 900 m. Sakesar Peak (1,527 m) is the highest point of the Salt Ranges.

The Indus Plains have been formed by the alluvium laid down from the river Indus and its tributaries. The Indus is a mighty stream about 2,900 km long with catchment areas of about 963,500 sq. km. From its source it flows from east to west between the Karakorams and the Himalayas. It receives a number of tributaries from the west: Kabul river, Kurram, Tochi and the Gomal River. The left side tributaries are Jhelum, Ravi and Sutlej. They combine at Panjnad. The swelling of Indus and its tributaries during summer causes floods. Sometimes the rivers change their courses and spread fertile silts in some areas and coarse sands in others. All these processes have built the Indus plains and have made them agriculturally very important. The Indus Plains slope down from north to south. In the north, they rise to about 300 m and drop to about 75 m near Panjnad in the Panjab. From there, they slope gently and cascade in to the Arabian Sea.

The Indus Plains can be divided into the following physiographic entities:

Extensive Piedmont Plains have developed between the Indus River and the Sulaiman-Kirthar mountains. They have been built by the alluvial fans along the Indus flowing eastward down the mountains. Most of the rivers rolling down the mountains become active only when rainfall takes place. They flow down the slopes swiftly. On reaching the foothills, they loose speed and drop part of their load within the streams, which split into a number of narrow channels. These channels become so overburdened (with sediment load) that they die before they reach the Indus towards which they flow. The gravel, sand and silt thus deposited, form the alluvial fans. The Piedmont plains, dominated by the alluvial fans, provide good soils and suitable topography for agriculture.

Alluvial Terraces are depositional and are separated from the adjoining flood plains by the river-cut bluffs ranging in height from 5 to 15 m. The sediments of the terraces are called old alluvium and are composed of compact calcareous silty clays.

Active Flood Plains are narrow strips of land along the Indus and its tributaries varying from 24 to 40 km in width. They are inundated almost every year, covered with rich alluvium and are suitable for agriculture. Old flood plains cover extensive areas between the active flood plains and the desert areas in the lower Indus Valley.

The Deltaic Plains have in fact been built by the Indus as a large delta at its mouth. The apex of the delta is to the south of Thatta. The area bounded by the Kalri and Pinyari, the two distributaries of the Indus, is taken as the Indus Delta. The delta is scarred with old and present channels of the Indus. At the coast, barrier bars have developed. There are extensive mud flats sliced by the tidal channels. The inland limit of the mud flats is marked by a cliff.

An extensive area in the south-west of Pakistan is covered with Rolling Sand Plains and Dunes. It is separated from the Indus valley by the dry channels of Ghaggar River. This extensive desert is called Cholistan in the Panjab and Thar in Sindh. It is not drained by any perennial stream. Therefore wind action is dominant in the formation of its topography. A vast expanse of sand plains with dunes dominates the scene. Agriculturally, it is a poor area