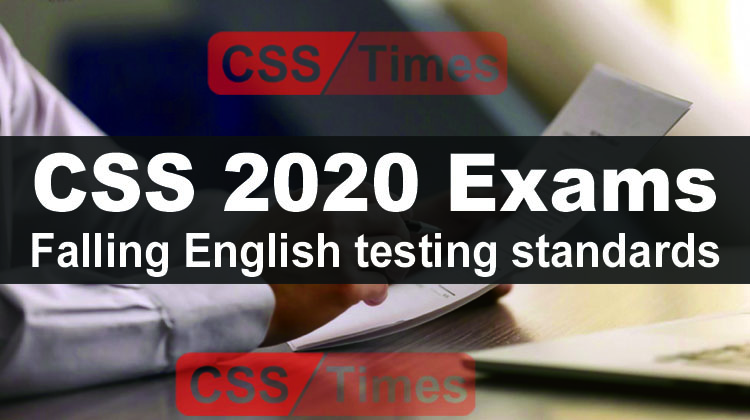 On February 12, with the subject of English, the FPSC initiated the yearly written examination of the candidates yearning for joining the Central Superior Services (CSS) of Pakistan. The first two papers – English Essay, and English precis and composition – laid bare the quality standards the FPSC had set for this year. Except one or two topics or questions, both papers offered a glimpse of the papers of 8th class.

The essay paper opened its door with a hackneyed topic, “Do we really need literature in our lives?” The rest of the essay topics followed suit: Agents of change, the Kashmir cause, democracy in Pakistan, the foreign policy, informal economy, promotion of tourism, freedom of speech, digital revolution, and IMF bailout package. These were oft repeated topics the notes on which have been now travelling from one generation to the next.

In a paper of English essay, the major objective to test the quality of knowledge of a CSS candidate is by fathoming a candidate’s exposition and analytical ability. Attached to the ability is the faculty of originality sprouting from creativity, though the rest of the factors such as the organization of thought and relevance to the topic are also significant.

There are three aspects that perpetrate the cruelty of the trite topics of the English essay paper of CSS 2020. First, these topics test candidates’ ability of regurgitating the knowledge imbibed through parroting. That is, candidates memorize the whole chunk of be-spoken essays including the embedded analyses leaving no room for originality or creativity. The answer sheet dupes the examiner: mediocrity dissimulates brilliance. Second, the topics plummet the quality bar and become a model essay pattern for the next year to follow. That is, such an exam paper encourages mediocrity amongst the prospective candidates throughout the year. Third, the topics inflict an injustice on brilliant and studious candidates, the candidates who worked hard throughout the year to shine in the examination. A prosaic paper such as the current one acts as an invidious equalizer. That is, the paper brings mediocre, pedestrian candidates on a par with bright, erudite candidates. Whereas the former celebrate their fluke, the latter repent the hours spent in learning originality and analysis.

In a paper of English precis and composition, the major objective is to test the linguistic understanding of a candidate. To meet the objective, paragraphs as a precis and comprehension are given, correct sentence structuring is asked, idioms and pairs of confusing words are used, besides using other testing measures.

The tyranny that the paper of English precis and composition of CSS 2020 executed is seven in numbers. First, the precis given to test linguistic understanding focused only on the vocabulary part and not on the complexity of thought. That is, the precis given was meant for examining CSS candidates’ familiarity with vocabulary only. The precis was on the topic of Saadat Hasan Manto – Manto, a misunderstood writer or Manto, a veiled genius. The precis was short of examining candidates’ ability to understand a complex thought couched in multiple words to simplify it one third. Against the principle that a complex mind is capable of understanding a presentation of complex ideas and facts, the precis was for simple minds. The precis tested overwhelmingly the simplicity of mind.

Second, the topic of English comprehension was globalization, another worn out topic. CSS candidates of the last category begin their preparatory journey from such a topic. Below a small paragraph on globalization, the questions asked were these: Define globalization; what is electronic mass communication; what does the term Third World denote; what is privatization; and explain ‘liberalism’ in the above context. There was nothing special in this exercise to test the English-comprehension faculty of CSS candidates. Even students of O level can comprehend the topic and answer the questions asked.

Fourth, only four sentence were given to punctuate the text. The task was where to put a full stop and comma; which letters to capitalize; and where from remove the semi-colon. To everyone’s dismay, a kid of class five can punctuate the sentences.

Fifth, out of eight sentences carrying spaces, CSS candidates had to fill in the blanks in only five sentences with appropriate prepositions. A CSS candidate is supposed to fill in all the blanks. Nevertheless, the asked prepositions for verbs were these: annoyed (at); bound (for); went (off); kept (on); knocked (down); meddle (in); put (off); and rounded (off).

Sixth, out of eight idioms, CSS candidates had to attempt only five. The level of idioms asked was dismally low and the selection was stale. The asked idioms were these: to break the ice; nip in the bud; see eye to eye with; for good; tamper with; the small hours; keep up appearances; and prima facie.

Seventh, five sentence in Urdu was given to be translated into English. None of the sentence did carry any idiomatic expression to throw down a linguistic proficiency challenge to CSS candidates.

In short, both papers of English offered a cakewalk to CSS candidates, favouring the mediocre ones. The level of expertise tested was class eight. By offering such an absurdly easy task, the FPSC has being trying to cream off the best candidates suitable for joining the executive branch of the country. Both papers offer a reason to understand why mediocrity is ruling over the administrative affairs of Pakistan.