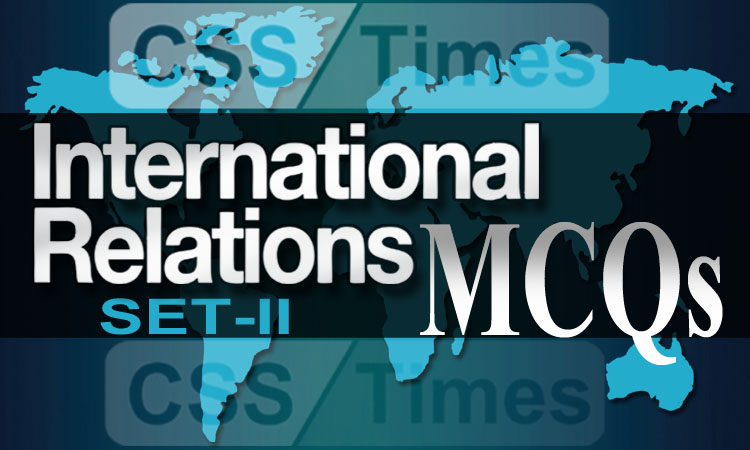 30)           “The state exits merely because crime exists and its principles function, therefore is to protect and restrain, not to foster and promote.”
The above statement best reflects the ideas of:
(a) Liberalism
(b) Socialism
(c) Anarchism
(d) Fascism
Answer. (a)

34)        Which one of the following is least relevant to the welfare view of functions of the state?
(a) Reasonable amount of social and economic equality
(b) Predominance of group interests over priorities of individuals
(c) Policies conducive to equality of opportunity
(d) Minimization of areas of conflict to maximize conciliation
Answer. (b)

36)        Which one of the following is the correct statement? Totalitarian State is the one which
(a) Commands unquestioning obedience to the authority of the ruler
(b) Guarantees conditions In which the individual can realize his true self
(c) Claims to regulate every sphere of individual’s life and activities
(d) As a natural organism possesses a will of its own to promote a good life
Answer. (c)

37)        Theory and Practice of International Relations is written by: (CSS 2010)
(a) Padelford and Lincoln
(b) Palmer and Perkins
(c) Hans Joachim Morgenthau
(d) None of these
Answer: (b)

40)        The subordination of the individual to the State is an essential feature of which one of the following?
(a) Socialist doctrine
(b) Feudal doctrine
(c) Conservative doctrine
(d) Fascist doctrine
Answer. (d)

41)        Preemptive Strike Doctrine confers upon states the: (CSS 2011)
(a) Right to attack any potential threat to its security.
(b) Right to attack when they are actually attacked
(c) The responsibility to intervene in the domestic affairs of other states for humanitarian protection
(d) Duty to respond to the calls of UN.
(e) None of these
Answer: (a)
Explanation: Different pundits have attributed different meanings to the Bush Doctrine. It was used to describe specific policy elements, including a strategy of “preemptive strikes” as a defense against an immediate threat to the security of the United States

44)        The idealist theory about the functions of state is also known as
(a) Social theory
(b) Welfare theory
(c) Anarchist theory
(d) Metaphysical theory
Answer: (d)

45)        Which one of the following is the most acceptable theory of the origin of state?
(a) Social contract theory
(b) Divine origin theory
(c) Force theory
(d) Evolutionary theory
Answer: (d)
Explanation: Political thinkers have attempted to explain the origin of the state in various ways. When, where and how the state came into existence have not been recorded anywhere in history. Therefore, the political thinkers were compelled to adopt various hypotheses, many of which are now discredited in the light of modern knowledge. Among the many theories which are concerned with the origin of the state the following are explained in this chapter.

The Historical or Evolutionary theory
Five theories in explanation of the origin of the state, but no single theory offers an adequate explanation. The theory which explains and is now accepted as a convincing origin of the state, is the Historical or Evolutionary theory. It explains the state is the product of growth, a slow and steady evolution extending over a long period of time and ultimately shaping itself into the complex structure of a modern state.

50)        Modern age is an Era of…….state
(a) Totalitarian
(b) Welfare
(c) Colonial
(d) Communist
Answer: (c)
Explanation: The extent of European imperialism in the Old World climbed steadily in the modern age, peaking ca. 1900. At this point, firm European domination had spread across most of the Old World, the only major exceptions being Turkey (the Ottoman Empire), Persia, and Japan. At its peak, the British Empire became the largest empire the world has ever known, at nearly a quarter of the Earth’s land area. The Russian Empire became history’s third-largest empire, behind the British and Mongol Empires.
In the nineteenth century, the European empires experienced three major changes: the Latin American Wars of Independence, the expansion of European territory in Asia, and the Scramble for Africa.
Most of the Spanish Empire was lost in the Latin American Wars of Independence (ca. 1810-30), sparked by Napoleon’s occupation of Spain, which (briefly) replaced the reigning Spanish king with Napoleon’s brother. This destabilized the politics of Latin America, where support for independence movements had already grown to dangerous proportions, especially after the success of the American Revolution (the first successful colonial revolution).A370,K318-19
The Wars of Independence gave rise to the modern nations of Latin America. (Brazil’s independence from Portugal, though achieved in the same period, was obtained peacefully.) Mexico became the primary power of Mesoamerica, while Brazil emerged as the chief power of South America. The United States, however, remained the overwhelmingly dominant power of the New World.

55)        __________ is suitable for welfare state.
(a) Monarchy
(b) Democracy
(c) Communism
(d) Aristocracy
Answer: (d)
Explanation: Aristocracy: A privileged social class whose members possess disproportionately large shares of a society’s wealth, social prestige, educational attainment and political influence, with these advantages having been acquired principally through gift or inheritance from a long line of similarly privileged and cultivated ancestors. The term refers also to a form of government in which the state is effectively controlled by the members of such a class. The term tends to have a somewhat unsavory or derogatory connotation today in the light of democratic theories, but in classical political philosophy it meant rule by “the best people” of the society, who were expected to feel a paternalistic concern for the humbler members of the society that would keep them from ruling in a purely self-seeking fashion.

57)        Objectives of International relations are to safeguard………
(a) National Interest
(b) Morality
(c) Religion
(d) Economy
Answer: (a)

59)        Which of the following is NOT one of the systematic ways in which individual decision-making diverges from the rational actor model?
(a) Misperceptions
(b) Cognitive bias
(c) Indeterminate preferences
(d) Affective bias
Answer: (c)

60)        Structural theories of International Relations suggest that some states are more important than others. Which state attribute do structural theories point to in determining the influence of a state?
(a).Geographic location
(b) Power
(c) Regime type
(d) Political maturity
Answer: (b)

61)        Which approach to international relations argues that states behave in structurally similar ways regardless of their regime type, geographical location, and political ideology?
(a) Idealism
(b) Liberalism
(c) Constructivism
(d) Realism
Answer: (d)

Answer: (b)
63)        What was the driving force behind international relations in Europe during the 19th century?
(a) The balancing of power between states and the prevention of hegemony.
(b) The ideologies of Fascism, Liberalism, and Communism.
(c) Free trade and market economics.
(d) A loose bipolarity between England and Germany.
Answer: (a)