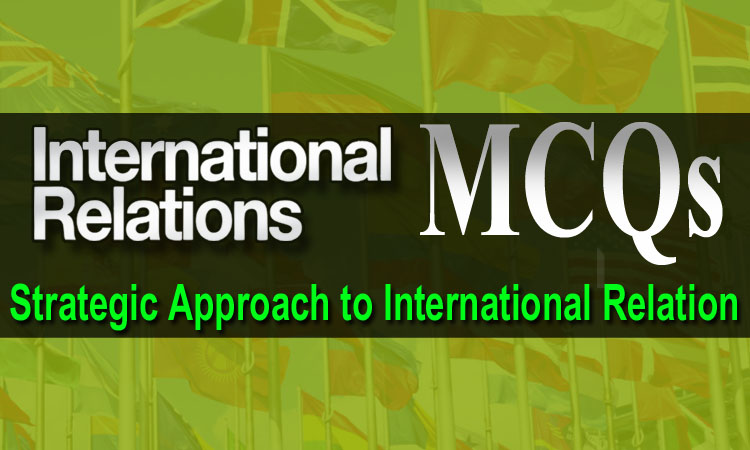 Which of the following is generally not considered to be a cause of war?
(a) God’s will
(b) Human nature
(c) Economics
(d) The international system
Answer: (a)

What is the state of war?
(a) A state that is aggressive and always building up its military
(b) The conditions when there is no actual conflict but a permanent cold war that could become a “real” war at any time.
(c) A situation in which several or neighboring states are at war
(d) None of these
Answer: (b)

Which among the following scholars propounded the systems approach towards the study of international relations?
(a) David Easton
(b) Gabriel Almond
(c) C. McClelland
(d) J.W. Burton
Answer. (c)

Which one of the following approaches or modest of international politics does not give importance to the role of state as an actor?
(a) Dependency model
(b) Realist Model
(c) Neo-realist model
(d) Interdependence pluralist model
Answer. (a)

Who among the following thinkers criticized the Austinian theory of sovereignty on the ground that law is not the command of the sovereign but an expression of the community’s sense of right?
(a) Laski
(b) Krabbe
(c) Duguit
(d) Gierke
Answer. (b)

Associations are not persona ficta but real persons existing prior to the State. This view was propounded by:
(a) Hobbes
(b) Hegel
(c) Duguit
(d) Gierke
Answer. (d)

About which of the following thinkers it has been said that his theory of the State is “an incongruous mixture of natural rights and physiological metaphor”?
(a) Bradley
(b) Spencer
(c) Bluntschli
(d) Burke
Answer. (b)

The Historical Theory of the Origin of the State was propounded by:
(a) Sir Henry Maine
(b) Triestske
(c) Oppenheimer
(d) Durkheim
Answer. (a)

Which one of the following political thinkers was the first exponent of the liberal theory of States?
(a) John Locke
(b) T.H. Green
(c) Jean Jacques Rousseau
(d) Hobbes
Answer. (a)

Who among the following used the expression “forced to be free” in connection with the notion of liberty of the individual?’
(a) Rousseau
(b) Locke
(c) Green
(d) Hobhouse
Answer. (a)

Bentham was a supporter of the theory of:
(a) natural rights
(b) historical rights
(c) legal rights
(d) ethical rights
Answer. (c)

The doctrine of proportionate equality was propounded by:
(a) Aristotle
(b) Rousseau
(c) Marx
(d) Rawls
Answer. (a)

Manipulation of boundaries to enable the party in power to capture (at the cost of other parties) as many seats as possible, has come to be known as:
(a) filibustering
(c) guillotine
(b) gerrymandering
(d) log-rolling
Answer. (b)