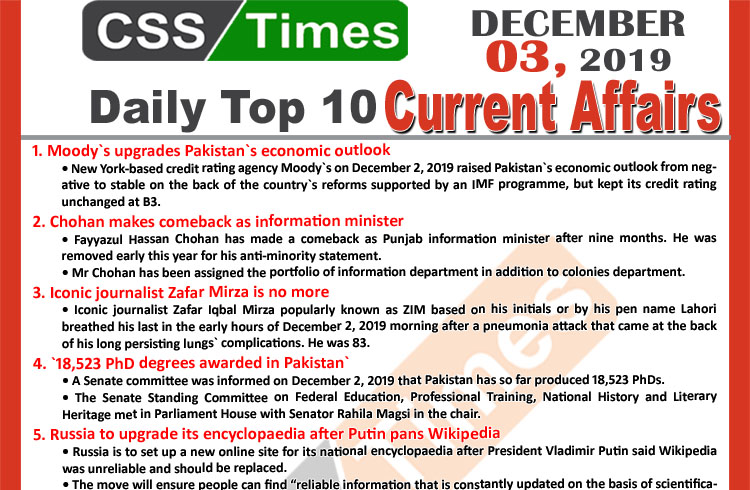 • New York-based credit rating agency Moody`s on December 2, 2019 raised Pakistan`s economic outlook from negative to stable on the back of the country`s reforms supported by an IMF programme, but kept its credit rating unchanged at B3.
• `The change in outlook to stable is driven by Moody`s expectations that the balance of payments dynamics will continue to improve, supported by policy adjustments and currency flexibility,` Moody`s Investor Service said, adding that such developments reduce external vulnerability risks, although foreign exchange reserve buffers remain low and will take time to rebuild.
• Projecting Pakistan`s fiscal deficit at the end of current fiscal year at 8.6 per cent instead of 7.1pc estimated by the government in the budget for 2019-20, the rating agency noted that fiscal strength had weakened with higher debt levels largely as a result of currency depreciation. However, it expected that the ongoing fiscal reforms, including through the International Monetary Fund programme, would mitigate risks related to debt sustainability and government liquidity.

• Fayyazul Hassan Chohan has made a comeback as Punjab information minister after nine months. He was removed early this year for his anti-minority statement.
• Mr Chohan has been assigned the portfolio of information department in addition to colonies department.
• Mian Aslam Iqbal had been holding the additional charge of information minister since July alongside his portfolio as minister of industries, commerce and investment.
• As Mr Iqbal excused himself from the information department assignment citing reasons of not justifying with the ministry jobs and constituency politics, circles in the government expressed their surprise at the timing as only two days ago Prime Minister Imran Khan had assigned him a duty to hold inquiry and report about the sacking of media persons from media houses and nonpayment of salaries

• Iconic journalist Zafar Iqbal Mirza popularly known as ZIM based on his initials or by his pen name Lahori breathed his last in the early hours of December 2, 2019 morning after a pneumonia attack that came at the back of his long persisting lungs` complications. He was 83.
• Mr Mirza was laid to rest later in the day. He left behind his wife and a son to mourn his death.
• An illustrious son of Lahore, Mr Mirza was born on Aug 9, 1936, in the Mochi Darwaza area of the Walled City. The only son in an educated household headed by a police officer father and a doting mother, he acquired his own set of `royal` rules that were to govern his life. He went to the Government College and began his journalistic career in the early 1960s

• A Senate committee was informed on December 2, 2019 that Pakistan has so far produced 18,523 PhDs.
• The Senate Standing Committee on Federal Education, Professional Training, National History and Literary Heritage met in Parliament House with Senator Rahila Magsi in the chair.
• A working paper prepared by the HEC, `implementation status` of decisions taken in previous meeting stated: `HEC maintains a PhD country directory based on information provided by universities. As per the directory, 18,523 local Ph Ds have been produced in Pakistan.

5. Russia to upgrade its encyclopaedia after Putin pans Wikipedia

• Russia is to set up a new online site for its national encyclopaedia after President Vladimir Putin said Wikipedia was unreliable and should be replaced.
• The move will ensure people can find “reliable information that is constantly updated on the basis of scientifically verified sources of knowledge”, a government resolution said.
• Putin last month proposed replacing the crowd-sourced online encyclopaedia Wikipedia with an electronic version of the Great Russian Encyclopaedia — the successor to the Soviet Union’s main encyclopaedia. John Lubbock, a communications coordinator for Wikimedia, said it was unclear how Putin actually planned to improve on Wikipedia.
• Russian Wikipedia is the 7th biggest language version of the site, with over 1.5 million articles created by 2.6 million users, all published on Open Licenses.

• Russia and China on December 2, 2019 launched a giant gas pipeline linking the countries for the first time, one of three major projects aimed at cementing Moscow`s role as the world`s top gas exporter.
• Presiding by video link-up over an elaborate televised ceremony, Russian leader Vladimir Putin and Chinese counterpart Xi Jinping hailed the `Power of Siberia` pipeline as a symbol of cooperation.
• `Today is remarkable, a truly historic event not only for the global energy market, but first of all for us and for you, for Russia and China, Putin said. XI said the project served as a model of cooperation.

7. Dictionary.com chooses `existential` as word of the year

• Climate change, gun violence, the very nature of democracy and an angsty little movie star called Forky helped propel existential to Dictionary.com`s word of the year.
• The choice reflects months of high-stakes threats and crises, real and pondered, across the news, the world and throughout 2019.
• `In our data, it speaks to this sense of grappling with our survival, both literally and figuratively, that defined so much of the discourse,` said John Kelly, senior research editor for the site, ahead of the announcement

• Confronted with a climate crisis threatening civilisation itself, humanity must choose between hope and surrender, UN chief Antonio Guterres told the opening plenary of a UN climate conference on December 3, 2019.
• `One is the path of surrender, where we have sleepwalked past the point of no return, jeopardising the health and safety of everyone on this planet, Guterres said.
• `Do we really want to be remembered as the generation that buried its head in the sand, that fiddled while the planet burned?` In a separate forum moments earlier, US Congressional leader Nancy Pelosi told the `COP25` conference that the world could still count on the United States despite President Donald Trump`s decision to pull out of the Paris Agreement

9. Pakistan bag one gold, two silver and one bronze

• Pakistani karatekas were on fire on December 2, 2019 in the ongoing 2019 South Asian Games as they helped the country bag three medals in Kathmandu, Nepal.
• Young karateka Shahida opened the account for Pakistan in the event with a gold medal in the single kata category with 42 points. Naimatullah was next to bag a medal for Pakistan as he scored 24.92 points to win a silver.
• The third medal was won in the team event courtesy Gulnaz, Shahida and Nargis` exceptional performance.
• Later, in the men`s team event, Pakistan trio of Naseer Ahmed, Noman and Naimatullah to a team competition bronze medal

• Nathan Lyon had never taken a five wicket haul against Pakistan. The veteran off spinner hadn`t taken a wicket in the day-night Test until the fourth day.
• He took two wickets in the first session on December 2, 2019 and three in the second before Australia finished sealed an innings and 48 runs victory under lights to sweep the series 2-0 with more than a day to spare.
• The 32-year-old Lyon (5-69) now has 50 Test wickets at the Adelaide Oval, where he`d worked as a curator before making the national team, his 16th five wicket haul in Tests and his first against Pakistan. 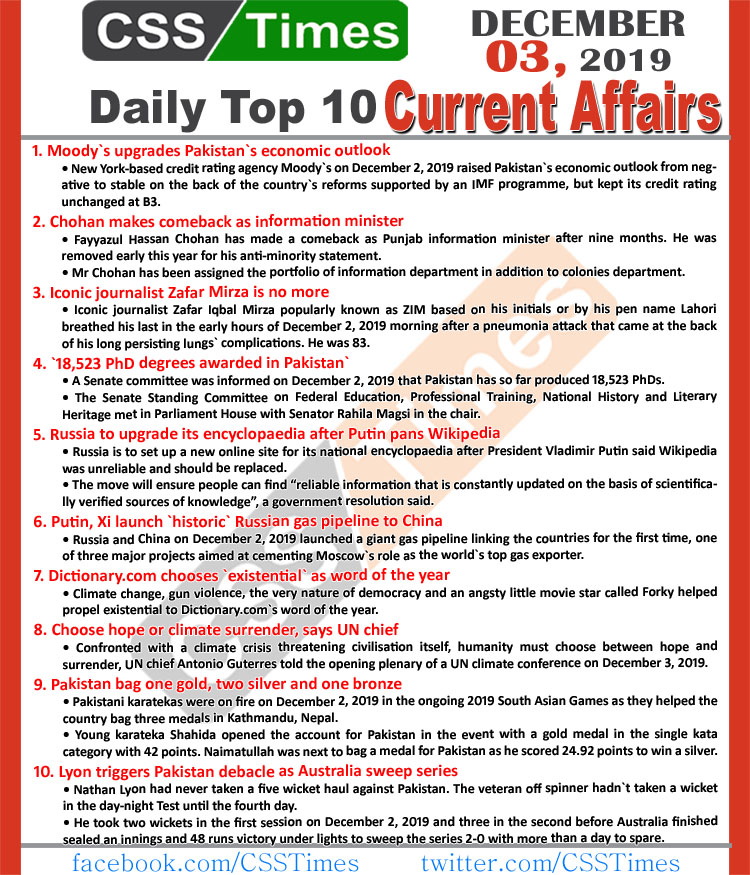