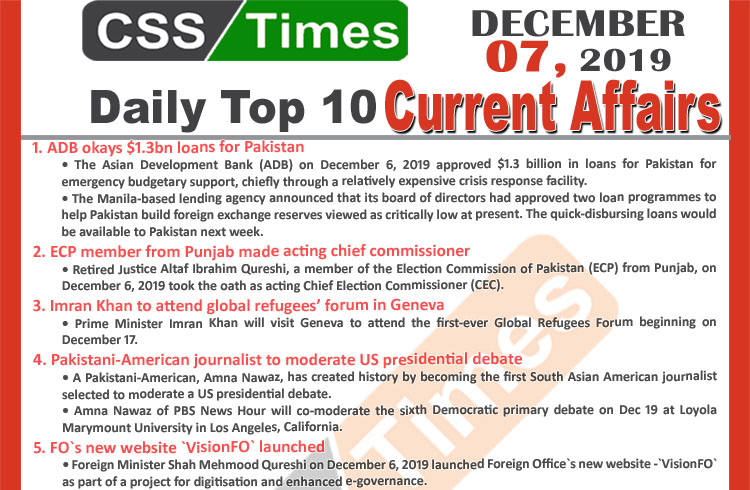 • The Asian Development Bank (ADB) on December 6, 2019 approved $1.3 billion in loans for Pakistan for emergency budgetary support, chiefly through a relatively expensive crisis response facility.
• The Manila-based lending agency announced that its board of directors had approved two loan programmes to help Pakistan build foreign exchange reserves viewed as critically low at present. The quick-disbursing loans would be available to Pakistan next week.
• The loans include a $1bn Special Policy-Based Loan (SPBL) typically meant for emergency situations and involves about 4 per cent interest rate as it is a relatively short-term loan for seven years and charged at London-Inter Bank Offered Rate (Libor) plus 2pc. This is the first time Pakistan is availing ADB`s emergency loan for budget support

• Retired Justice Altaf Ibrahim Qureshi, a member of the Election Commission of Pakistan (ECP) from Punjab, on December 6, 2019 took the oath as acting Chief Election Commissioner (CEC).
• The oath was administered by ECP member from Khyber Pakhtunkhwa (KP) retired Justice Irshad Qaiser under Article 217 of the Constitution, a day after Sardar Muhammad Raza retired as CEC after completing his five-year term in office.
• Interestingly, after the retirement of the CEC, the ECP is left with only two members both have been unconstitutionally appointed

• Prime Minister Imran Khan will visit Geneva to attend the first-ever Global Refugees Forum beginning on December 17.
• At his weekly news briefing here, Foreign Office spokesperson Dr Mohammed Faisal said the forum was being held in recognition of Pakistan’s generosity, hospitality and compassion for hosting the Afghan refugees for over 40 years.
• This is the first major meeting on the refugees of 21st century and it will be jointly hosted by the UN Refugee Agency and the government of Switzerland. Several heads of states are expected to join Prime Minister Imran Khan as co-conveners.

• Foreign Minister Shah Mehmood Qureshi on December 6, 2019 launched Foreign Office`s new website -`VisionFO` as part of a project for digitisation and enhanced e-governance.
• After launching the new website at a ceremony that was attended by foreign diplomats, digitisation experts and foreign ministry officials, the foreign minister said that the project would take the FO into 21st century and to the heart of digital communications.
• `#VisionFO is a mindset to craft an environment of thought leadership at #MoFA, to promote a macro vision, digital landscape and an evolved/transparent way of comms.

• North Korea has renewed its verbal attacks on President Trump, after he threatened military action.
• The foreign ministry said if Mr Trump was confrontational, it “must really be diagnosed as the relapse of the dotage of a dotard”.
• The North first called Mr Trump a dotard, meaning old and weak, in 2017.
• It is the first time in over a year that Pyongyang has been openly critical of Donald Trump, the BBC’s Korea correspondent Laura Bicker said

• Russia and Turkey are working on a contract for the delivery of a new batch of Russian S-400 missile systems, the Interfax news agency cited a senior official at a Russian military cooperation agency as saying on December 6, 2019.
• Such a deal would be likely to further strain Ankara`s relations with Washington which has suspended Turkey from the US F-35 stealth fighter jet programme, in which it was a producer and buyer, to penalise it for buying S-400 batteries this year.
• `We`re gradually working on this question. Most importantly, both sides are intent on continuing cooperation in this sphere,` the head of Russia`s Federal Service for Military Technical Cooperation was quoted as saying

• The franchises have finalized their picks for the fifth edition of the Pakistan Super League (PSL-5) after the draft, with all six franchises changing their strategy in order to account for the change in venue as the tournament returns to Pakistan.
• Defending champions Quetta have managed to get the likes of Jason Roy and Sohail Khan. Runners-up Peshawar Zalmi, meanwhile, had retained all their three Platinum picks from last year but did well to strengthen certain key positions by adding the likes of Shoaib Malik and Rahat Ali to their roster.

• Cricket is to trial using a TV umpire instead of the on-field official to call no-balls in the series between India and West Indies, following a rash of mistakes.
• The Twenty20 and ODI games, starting with the first T20 in Hyderabad on December 6, 2019, `will be contested trialing technology to call front foot no balls`, the International Cricket Council said.
• `Throughout the trial, the third umpire will be responsible for monitoring every ball bowled and identifying whether there has been any front foot infringement,` an ICC statement said 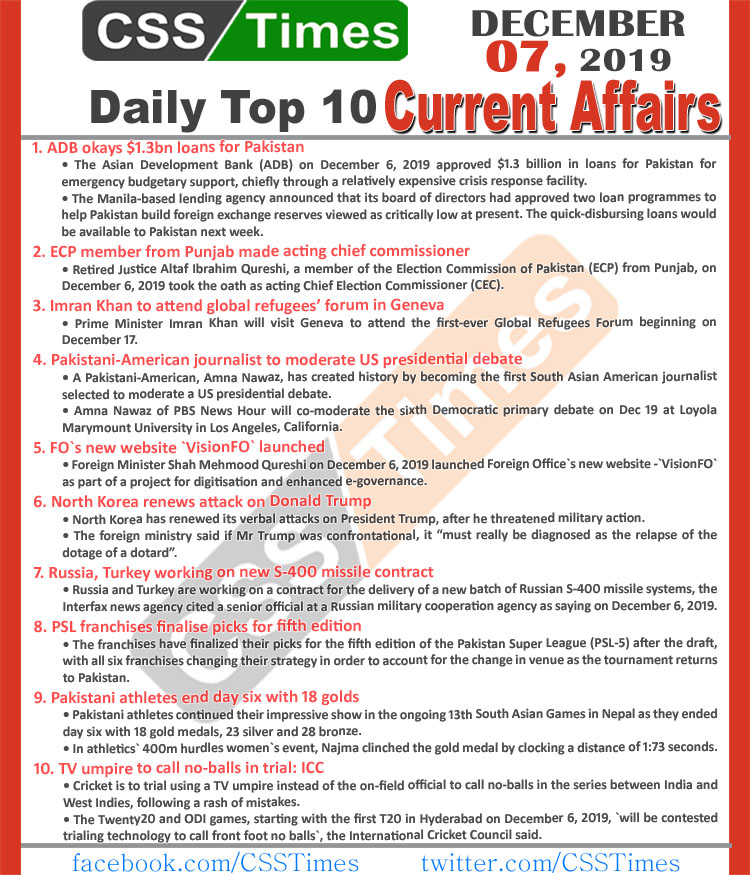