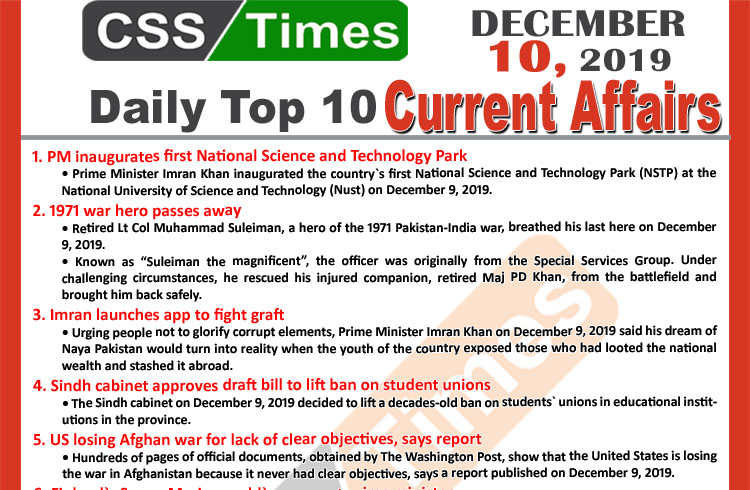 • Prime Minister Imran Khan inaugurated the country`s first National Science and Technology Park (NSTP) at the National University of Science and Technology (Nust) on December 9, 2019.
• Speaking at the inauguration, Mr Khan said the government was determined to turn Pakistan into a knowledge-based economy.
• Other guests at the event included Chief of Army Staff Gen Qamar Javed Bajwa, who is also the chairman of the Nust Board of Governors, Minister for Science and Technology Fawad Hussain Chaudhry, diplomats, industry representatives from across the country and the park`s local and international tenants

• Retired Lt Col Muhammad Suleiman, a hero of the 1971 Pakistan-India war, breathed his last here on December 9, 2019.
• Known as “Suleiman the magnificent”, the officer was originally from the Special Services Group. Under challenging circumstances, he rescued his injured companion, retired Maj PD Khan, from the battlefield and brought him back safely.

• Urging people not to glorify corrupt elements, Prime Minister Imran Khan on December 9, 2019 said his dream of Naya Pakistan would turn into reality when the youth of the country exposed those who had looted the national wealth and stashed it abroad.
• `Although Naya Pakistan is in the making, the dream will come true only when the youth participate in the process and chase the looters,` the prime minister said while addressing the launching ceremony of `Report Corruption` mobile application introduced by the Anti-Corruption Establishment of Punjab.
• The app was introduced on the occasion of International Anti-Corruption Day on December 9, 2019

• The Sindh cabinet on December 9, 2019 decided to lift a decades-old ban on students` unions in educational institutions in the province.
• In its five-hour-long deliberations, the cabinet also approved draft prison rules for release of elderly prisoners and creation of the Shaheed Allah Bukhsh Soomro University of Art, Designand Heritage at Jamshoro.
• The meeting of the cabinet was chaired by Chief Minister Murad Ali Shah and attended by Chief Secretary Syed Mumtaz Ali Shah, ministers, advisers and officers concerned.
• The draft law with regard to lifting the ban on students` unions was prepared in the light of the suggestion of the chief minister to activate and regulate the unions in the province.

• Hundreds of pages of official documents, obtained by The Washington Post, show that the United States is losing the war in Afghanistan because it never had clear objectives, says a report published on December 9, 2019.
• `Some US officials wanted to use the war to turn Afghanistan into a democracy. Others wanted to transform Afghan culture and elevate women`s rights. Still others wanted to reshape the regional balance of power among Pakistan, India, Iran and Russia,` the Post observed.
• The Post spent months investigating this report, which is based on 2,000 pages of unpublished documents, 600 interviews and thousands of previously classified memos dictated by former US defence secretary Donald Rumsfeld

• At 34, Sanna Marin will become the world`s youngest sitting prime minister when she is sworn in by the Finnish parliament on December 10, 2019, but she is far from lacking in political experience.
• The former transport minister gained a reputation as a tough, straight-talking operator from her five years as leader of the city council in her hometown of Tampere, where she took ofhcein2012aged27.
• Marin`s rise to the pinnacle of Finnish government means that when she takes over as head of the Social Democratic Party next year, women will hold the top job in each of the five parties in Finland`s governing centre left coalition, and all but one of the leaders are aged under 35.
• Marin becomes not only Finland`s youngest ever prime minister, but also the world`s youngest sitting head of government, ahead of Ukraine`s Prime Minister Oleksiy Honcharuk, who is currently 35.

• Russia was banned from the world`s top sporting events for four years on December 9, 2019, including the next summer and winter Olympics and the 2022 FIFA World Cup, for tampering with doping tests.
• The World Anti-Doping Agency (WADA) executive committee acted after concluding that Moscow had planted fake evidence and deleted files linked to positive doping tests in laboratory data that could have helped identify drug cheats.
• The decision was a huge blow to the pride of a nation that has traditionally been a powerhouse in many sports but whose reputation has been tarnished by a series of doping scandals.

• Caroll Spinney, who gave Big Bird his warmth and Oscar the Grouch his growl for nearly 50 years on Sesame Street, died on December 8, 2019 at the age of 85 at his home in Connecticut, according to the Sesame Workshop.
• The legendary puppeteer lived for some time with dystonia, which causes involuntary muscle contractions, the Sesame Workshop said in a statement.
• Spinney voiced and operated the two major Muppets from their inception in 1969 when he was 36, and performed them almost exclusively into his 80s on the PBS kids television show that later moved to HBO

• The weather here on December 9, 2019 was on the hazy side with the breeze making the atmosphere chilly just as Pakistan players got engaged in their first practice session at a new-look Pindi Cricket Stadium, the venue for the opening clash of the landmark two-Test series against Sri Lanka.
• With Test cricket now just two days away from returning to Pakistan after the tragic events of March 2009 when the Mahela Jayawardene-led Sri Lankan side came under a horrifying terror attack on the third morning of the second Test against Pakistan at the Gaddafi Stadium in Lahore, the build-up to the upcoming fixture hasn`t yet generated the usual fanfare.
• The Pakistan Cricket Board (PCB) has spent around Rs1 billion on the renovation of the stadium while it took almost a year for all tasks to be completed to make the venue more appealing as an international cricketing centre. The PCB is hopeful of a respectable turnout from Wednesday when the match starts. 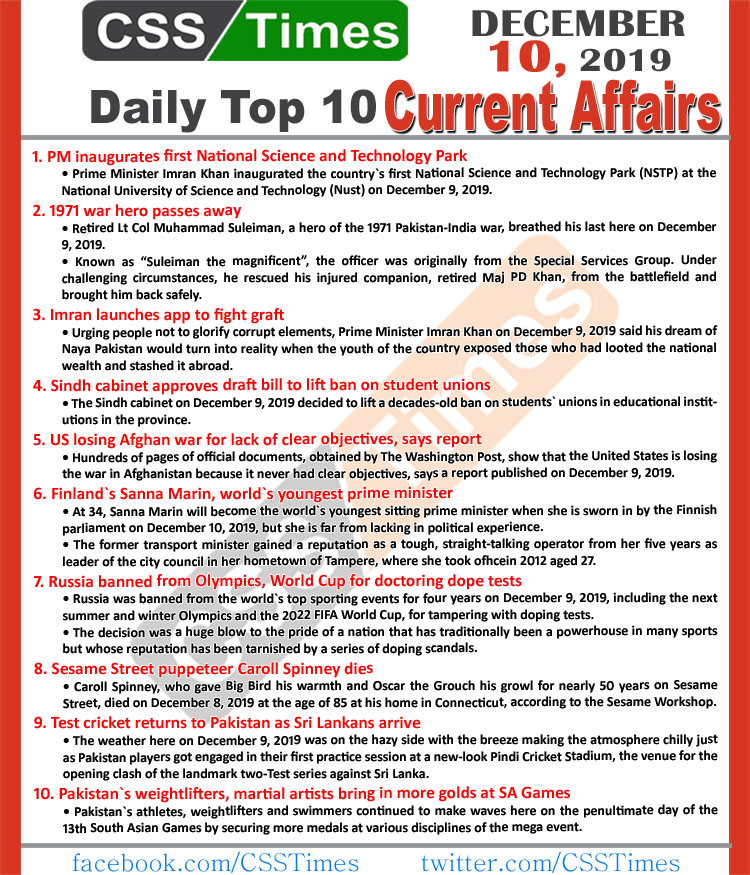