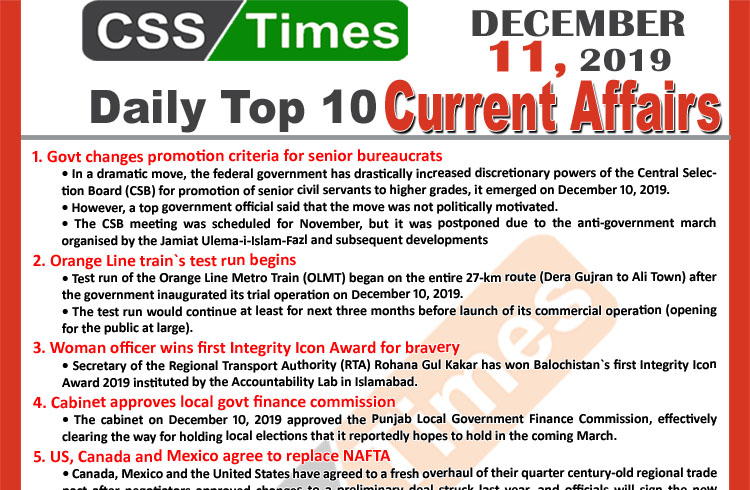 • In a dramatic move, the federal government has drastically increased discretionary powers of the Central Selection Board (CSB) for promotion of senior civil servants to higher grades, it emerged on December 10, 2019.
• The move that comes ahead of a CSB meeting allows 30 discretionary marks to CSB members to lift the position of what a sen-ior bureaucrat described as favourite candidates by superseding candidates with impeccable service record but no political or bureaucratic connections.
• However, a top government official said that the move was not politically motivated.
• The CSB meeting was scheduled for November, but it was postponed due to the anti-government march organised by the Jamiat Ulema-i-Islam-Fazl and subsequent developments

• Test run of the Orange Line Metro Train (OLMT) began on the entire 27-km route (Dera Gujran to Ali Town) after the government inaugurated its trial operation on December 10, 2019.
• The test run would continue at least for next three months before launch of its commercial operation (opening for the public at large).
• `Orange Line is the first transport project of its kind being completed under China-Pakistan Economic Corridor. It also symbolises Pak-China friendship and is a magnificent gift for Lahorites, Punjab Minister for Transport Jahanzeb Khan Khichi said after he inaugurated commencement of the trains` trial run at a ceremony by unveiling the plaque at Ali Town

• Secretary of the Regional Transport Authority (RTA) Rohana Gul Kakar has won Balochistan`s first Integrity Icon Award 2019 instituted by the Accountability Lab in Islamabad.
• The award ceremony was held on December 9, 2019, where five government officers were given Integrity Icon Awards by Minister of State for Climate Change Zartaj Gul.
• Ms Kakar, who is serving as RTA secretary, received the province`s first Integrity Icon Award in the `bravery icon` category for her utmost efforts in revamping the transport sector in Quetta and other parts of Balochistan.
• Terming the Integrity Awards necessary for encouraging honest government officers, Ms Gul said that the Accountability Lab had been awarding country`s brave and honest officers for the last four years

• The cabinet on December 10, 2019 approved the Punjab Local Government Finance Commission, effectively clearing the way for holding local elections that it reportedly hopes to hold in the coming March.
• In the run-up to the polls, the provincial government had already constituted an eight-member team headed by the law minister to deliberate on and recommend date for the LG polls. The committee reportedly conveyed its readiness to the Election Commission for March.
• Another approval by the 21st meeting of the cabinet was allowing amendment to the CrPC which can cast first-class magistrates as price controller in the province. Of late, the PTI government has been struggling to control prices of vegetables, fruits and pulses and it said the absence of magistracy was the missing link in its efforts to contain the process

5. US, Canada and Mexico agree to replace NAFTA

• Canada, Mexico and the United States have agreed to a fresh overhaul of their quarter century-old regional trade pact after negotiators approved changes to a preliminary deal struck last year, and officials will sign the new agreement on December 10, 2019.
• The deal, which still needs the approval of lawmakers in all three countries, adds more stringent oversight of the pact`s labour provisions demanded by US Democrats, changes that Speaker of the House Nancy Pelosi said made it an `infinitely better` deal than the one struck between the Trump administration, Canada and Mexico in 2018.
• The United States, Mexico, Canada Trade Agreement, or USMCA, would replace the North American Free Trade Agreement (NAFTA), a regional pact in place since 1994 that encompasses $1.2 trillion in annual trade across the continent. Its backers say it is responsible for 12 million US jobs and a third of all US agricultural exports

6. US agency seeks sanctions against India over anti-Muslim bill

• A bipartisan US federal agency the Commission on International Religion Freedom (USCIRF) has sought sanctions against India`s Home Minister Amit Shah and other principal leadership if the controversial Citizenship Amendment Bill (CAB) is passed by both chambers of the Indian parliament.
• On December 9, 2019, the Lok Sabha, the lower house of Parliament, passed the bill by 311 to 80 votes.
• Mr Shah, the original mover, re-introduced the controversial bill in Lok Sabha, ignoring widespread protests in and outside India.
• The bill now goes to the upper house, the Rajya Sabha. Both houses of parliament must ratify a bill before it can become law.

• Nobel peace laureate Aung San Suu Kyi faced calls for Myanmar to `stop the genocide` of Rohingya Muslims as she personally led her country`s defence at the UN`s top court on December 10, 2019.
• Myanmar`s civilian leader sat through graphic accounts of mass murder and rape as the west African state of The Gambia set out its case at the International Court of Justice in The Hague.
• Thousands of people back home in Yangon rallied in support of 74-year-old Suu Kyi, whose silence about the plight of the Rohingya has tarnished her international reputation as a rights icon.
• Around 740,000 Rohingya fled to neighbouring Bangladesh after a bloody crackdown by the Myanmar military in 2017 that UN investigators have already described as genocide

• Pakistan`s squash outfit added another feather to their cap as they claimed gold medal in the team event of the 13th South Asian Games in Kathmandu when they outclassed traditional rivals India in the final on December 10, 2019.
• The games ended with an impressive closing ceremony on December 10, 2019. Pakistan finished fourth on the final medals table, bagging 32 gold, 41 silver, and 59 bronze medals. India dominated the points table with 174 gold medals, with Nepal and Sri Lanka following with 51 and 40 golds, respectively.
• Pakistan`s squash players showed a stunning performance to emerge victorious in the team event final.

9. After a decade, Pakistan get set to play Test cricket on home soil

• The moment of truth has finally arrived for Pakistan to play host to Test cricket for the first time in 10 years and nine months.
• From December 11, 2019 onwards Sri Lanka who ironically were the last visiting side to play at the highest level in this country would be bidding to extend their dominance over Pakistan here at the Pindi Cricket Stadium.
• Over the years Pakistan and Sri Lanka have been inseparable cricketing brothers because it was on Pakistan`s insistence that Sri Lanka were granted Test status, rather belatedly by the game`s governing body the International Cricket Council, in 1981

• Pakistan will host the 14th South Asian Games in 2021.
• This was announced by South Asian Olympic Committee meeting held here in Kathmandu which confirmed the hosting rights to Pakistan. 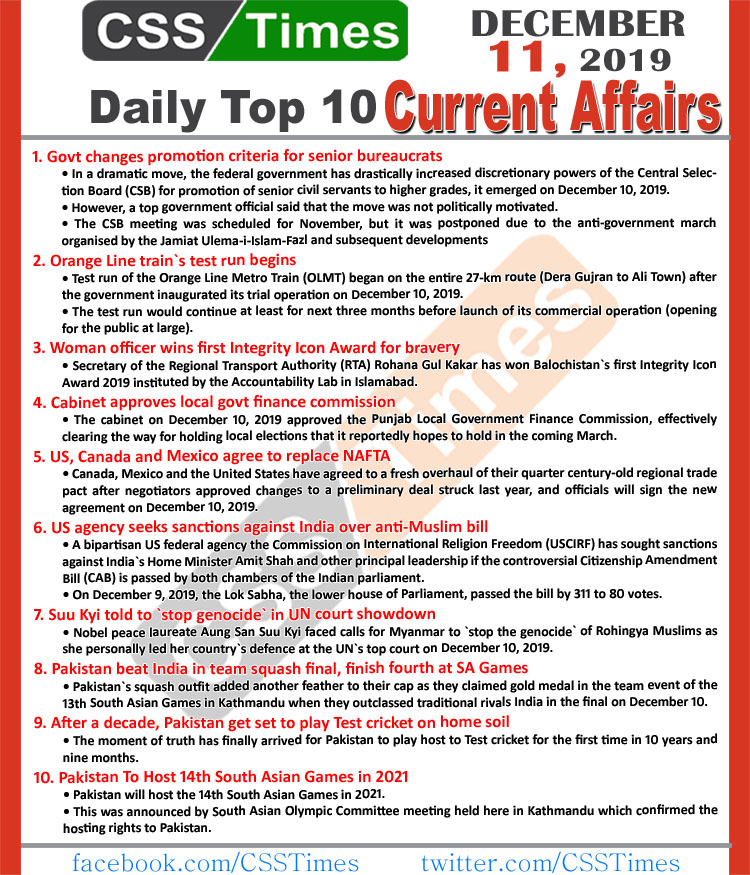