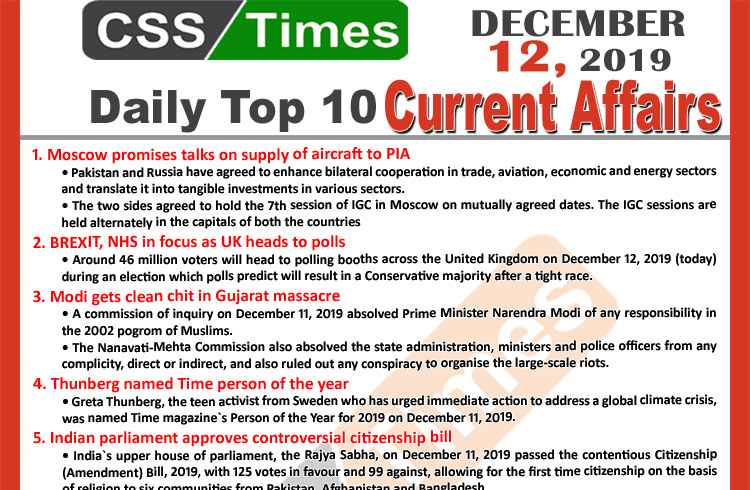 1. Moscow promises talks on supply of aircraft to PIA

• Pakistan and Russia have agreed to enhance bilateral cooperation in trade, aviation, economic and energy sectors and translate it into tangible investments in various sectors.
• At the conclusion of the sixth session of the Pakistan-Russia Inter Governmental Commission (IGC) on trade, economic and scientific and technical cooperation here on Wednesday, the Russian side also promised to start negotiations on supply and aftersales service of 6-16 Sukhoi SuperJet-100 aircraft to the Pakistan International Airlines (PIA)in the first quarter of 2020.
• The two sides agreed to hold the 7th session of IGC in Moscow on mutually agreed dates. The IGC sessions are held alternately in the capitals of both the countries

2. BREXIT, NHS in focus as UK heads to polls

• Around 46 million voters will head to polling booths across the United Kingdom on December 12, 2019 (today) during an election which polls predict will result in a Conservative majority after a tight race.
• Voters` key concerns include BREXIT, a slow economy, feeble health and social care provision, the climate crisis, and law and order. A fresh poll released by data company YouGov a day before voting named the Conservative party as favourite but also said a hung parliament was a real possibility.
• Anyone aged 18 or more can vote, as long as they are registered and a British citizen or a qualifying citizen of the Commonwealth or Republic of Ireland. These voters will choose 650 men and women as Members of Parliament (MPs), with 326 seats needed for a majority.

• A commission of inquiry on December 11, 2019 absolved Prime Minister Narendra Modi of any responsibility in the 2002 pogrom of Muslims.
• The Nanavati-Mehta Commission also absolved the state administration, ministers and police officers from any complicity, direct or indirect, and also ruled out any conspiracy to organise the large-scale riots.
• It refused to call the riots a result of `pre-planned conspiracy` or `orchestrated violence.
• `There is no evidence to show that these attacks were either inspired or instigated or abated by any minister of the state,` the commission said in its report, which runs to over 1,500 pages and is compiled in nine volumes.

• Greta Thunberg, the teen activist from Sweden who has urged immediate action to address a global climate crisis, was named Time magazine`s Person of the Year for 2019 on December 11, 2019.
• Thunberg, 16, was lauded by Time for starting an environmental campaign in August 2018 which became a global movement, initially skipping school and camping out in front of the Swedish Parliament to demand action.
• `In the 16 months since, she has addressed heads of state at the UN, met the Pope, sparred with the president of the United States and inspired four million people to join the global climate strike on September 20, 2019, in what was the largest climate demonstration in human history,` the magazine said.

• India`s upper house of parliament, the Rajya Sabha, on December 11, 2019 passed the contentious Citizenship (Amendment) Bill, 2019, with 125 votes in favour and 99 against, allowing for the first time citizenship on the basis of religion to six communities from Pakistan, Afghanistan and Bangladesh.
• Muslims have been pointedly excluded.
• The votes of the AIADMK, the Janata Dal (United) and the Biju Janata Dal were key in helping the BJP-led government get the bill passed in the upper house. Members of former BJP ally Shiv Sena did not vote.
• The bill, which has already been passed by the lower house of parliament, will amend the Citizenship Act, 1955, and will grant citizenship to non-Muslim communities from Afghanistan, Bangladesh and Pakistan, who entered India on or before Dec 31, 2014

6. Muhammad among top 10 baby names in US

• The name Muhammad has made the list of top 10 baby names for boys in the US for the first time, reports a US broadcasting service, Voice of America (VOA).
• The report is based on the data provided by a parenting website BabyCenter, showing that two Arabic names Muhammad and Aaliyah made it to the top 10 list for boys and girls in 2019.
• Sophia remained the most popular name for girls in the United States in 2019 while Liam climbed to the top spot for boys.
• Muhammad and Aaliyah replaced Mason and Layla to make it to the list.
• Other popular names include Jackson, Noah, Aiden and Grayson for boys and Olivia, Emma, Ava and Aria for girls.

• The world`s first fully electric commercial aircraft took its inaugural test flight on December 10, 2019, taking off from the Canadian city of Vancouver and offering hope that airlines may one day end their polluting emissions.
• `This proves that commercial aviation in all-electric form can work,` said Roei Ganzarski, chief executive of Seattle-based engineering firm magniX.
• The company designed the plane`s motor and worked in partnership with Harbour Air, which ferries half a million passengers a year between Vancouver, Whistler ski resort and nearby islands and coastal communities

8. 30th anniversary of UN CRC to be marked today

• The year 2019 marks the 30th anniversary of the adopdon of UN Convention on the Rights of the Child (CRC).
• The commemoration is set to begin today (December 12, 2019) with a call from United Nations Children`s Fund (UNICEF) that countries must act on their pledge and accelerate progress already made and develop new solutions to translate rights into realities.
• The CRC underscores the accountability of governments, civil society, parents and the international community to fulfil their obligations towards realising the rights of children and ensure that these rights remain inalienable, integral and indivisible from the universal human rights framework.
• According to UNICEF, Pakistan was one of the first countries to ratify the CRC within a year of its adoption.

9. A new beginning for Pakistan cricket

• For 10 years, nine months and eight days to be precise, Pakistan were denied the right to host a Test match in their own backyard. That agonising period for the national team, as well as millions of fans at home, finally ended on December 11, 2019 with the commencement of the first of two Test matches against Sri Lanka.
• The resumption of Test cricket in Pakistan also resulted in the entire Pakistan XI playing their first Test on home soil while two of them opening batsman Abid Ali and left-arm paceman Usman Khan Shinwari became the 239th and 240th players to launch their Test careers with their debuts.
• Like a number of other notable milestones in the history of Pakistan cricket, Dec 11, 2019, will now forever be remembered as the day when the country finally `regained` Test status on home soil.

10. Aleem Dar set to break umpiring record for most Tests

• Aleem Dar is set to break Steve Bucknor`s record of most Tests as an umpire in the first match of the series between Australia and New Zealand, which starts in Perth on December 11, 2019.
• The 51-year-old, who took up umpiring after playing first-class cricket in Pakistan, is standing in his 129th Test match as an on-field umpire. He stood in his first Test in Dhaka in 2003 during England`s tour of Bangladesh.
• Starting his international career in 2000 during Pakistan`s home ODI series against Sri Lanka, Aleem has officiated in 207 ODIs and is only two matches shy of the record of 209 matches in that format held by Rudi Koertzen of South Africa 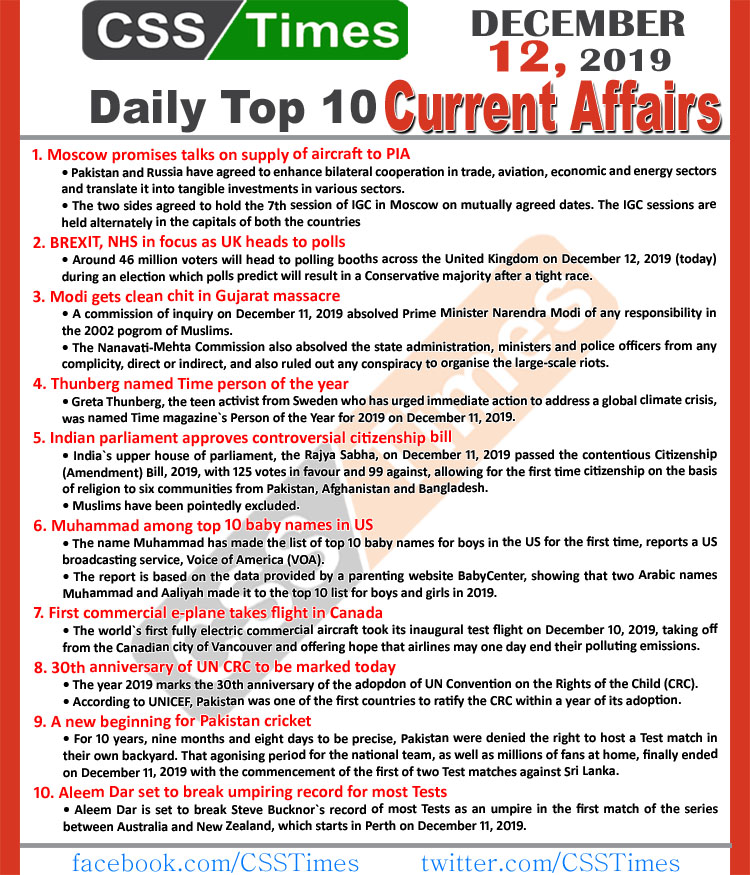