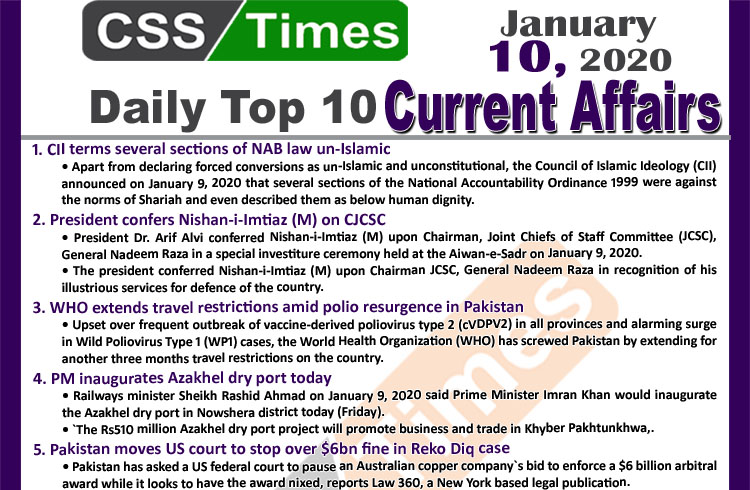 • Apart from declaring forced conversions as un-Islamic and unconstitutional, the Council of Islamic Ideology (CII) announced on January 9, 2020 that several sections of the National Accountability Ordinance 1999 were against the norms of Shariah and even described them as below human dignity.
• While there was no reaction from NAB to the CII observation, an unexpected defence of the current accountability law came from Minister for Science and Technology Fawad Chaudhry.
• In a tweet, the minister not only criticised the CII observation over the conduct of NAB, but also questioned the legality of the council
• `Sections 14-D, 15-A and 26 of the accountability law were un-Islamic, declared CII chairman Dr Qibla Ayaz at a press conference after a two-day meeting of the council. He said the option of plea bargain and turning of suspects into approvers were also against Shariah.

3. WHO extends travel restrictions amid polio resurgence in Pakistan

• Upset over frequent outbreak of vaccine-derived poliovirus type 2 (cVDPV2) in all provinces and alarming surge in Wild Poliovirus Type 1 (WP1) cases, the World Health Organization (WHO) has screwed Pakistan by extending for another three months travel restrictions on the country.
• The WHO has recommended that there is an urgent need to overhaul the entire leadership and strategy of the anti-polio programme in Pakistan.
• The decision of extending travel restriction was taken on the recommendations of the Emergency Committee of International Health Regulations (IHR) and conveyed to Islamabad a couple of days back.

5. Pakistan moves US court to stop over $6bn fine in Reko Diq case

• Pakistan has asked a US federal court to pause an Australian copper company`s bid to enforce a $6 billion arbitral award while it looks to have the award nixed, reports Law 360, a New York based legal publication.
• The company Tethyan Copper Co. Pty Ltd won the award last summer following a dispute over the rejected Reko Dig mining project in Balochistan.
• Pakistan argued in a federal court in Washington that the enforcement could have `devastating consequences for its political and economic stability`, said the author, Caroline Simson

6. 11000 schools to be shifted to solar energy in January

• Punjab Minister for Energy Dr Akhtar Malik on January 9, 2020 said 6000 primary schools had so far been shifted to solar energy and 11000 more would get the environment-friendly source of power by end of this month.
• Presiding over a monthly performance review meeting, the minister said the government was focusing on environment-friendly and cheaper sources of electricity to benefit the masses, a press release issued here said.
• Malik said that Quaid-e-Azam Solar Park and Punjab Power Development Board registered record profit by virtue of better management

• A US air strike killed a Taliban splinter-group commander and several other fighters in the western Afghan province of Herat, Afghan and military sources said on January 9, 2020.
• The commander, named as Mullah Nangyalay, was killed in Shindand district, close to the border with Iran, said Herat provincial governor`s spokesman Jailani Farhad.
• Nangyalay split from the main branch of the Taliban after the 2013 death of founder Mullah Omar and joined a smaller breakaway faction led by a commander known as Mullah Rasool

8. US says ready to talk with Iran ‘without preconditions’

• While justifying the killing of Iranian general Qasem Soleimani by the United States as an act of self-defence, US ambassador to the United Nations said that Washington was prepared to hold negotiations with Iran “without preconditions”.
• In a letter to the UN Security Council, US ambassador Kelly Craft said that the US stands “ready to engage without preconditions in serious negotiations with Iran, with the goal of preventing further endangerment of international peace and security or escalation by the Iranian regime”.
• Washington also vowed to take additional action “as necessary” in the Middle East to protect US personnel and interests

• Rosie Gabrielle, a Canadian solo traveler who spent a considerable amount of time last year in Pakistan, announced that she had converted to Islam.
• She took to Instagram to announce the news and wrote: “This last year was one of the hardest in my life, and all life’s challenges have led me to this point here and now. From a young child, I’ve always had a unique connection with creation and special relationship to God. My path was far from easy and I carried a lot of anger in my heart from a lifetime of pain, always begging God, why me? Until ultimately coming to the conclusion that all is meant to be, and even my suffering is a gift,” she wrote

• Lebanon banned former auto tycoon Carlos Ghosn from travel on January 9, 2020 and asked Japan to hand over his file on financial misconduct charges, as Tokyo urged the fugitive businessman to return.
• The 65-year-old businessman for years venerated in Japan for turning around once-ailing Nissan fled while awaiting trial on charges including allegedly underreporting his compensation to the tune of $85 million.
• His shock arrival in his native Lebanon last month was the latest twist in a story worthy of a Hollywood plot and prompted outrage from the Japanese government as well as from Nissan 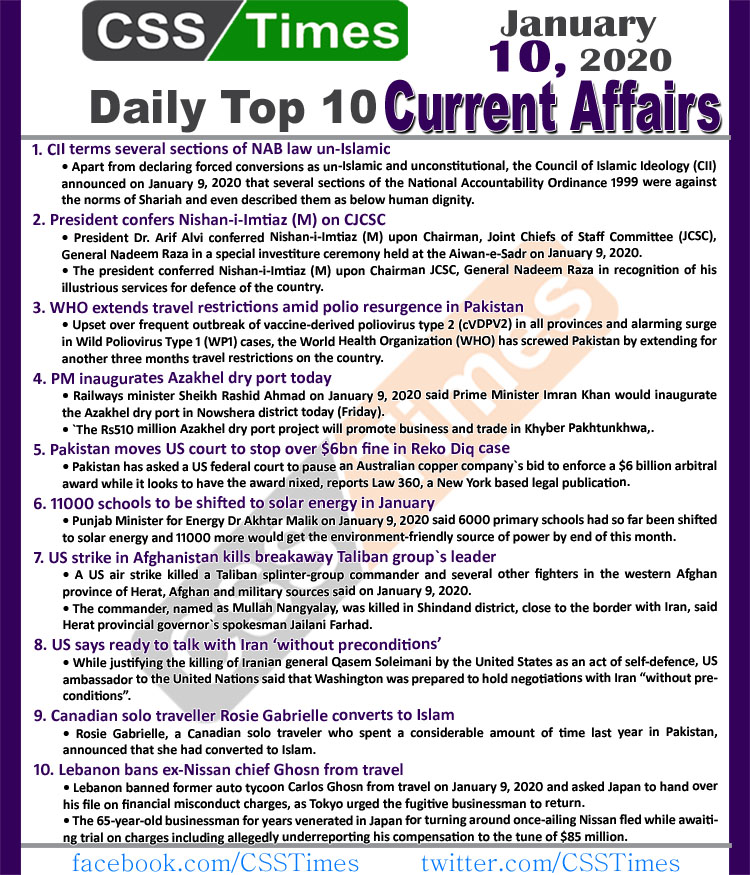