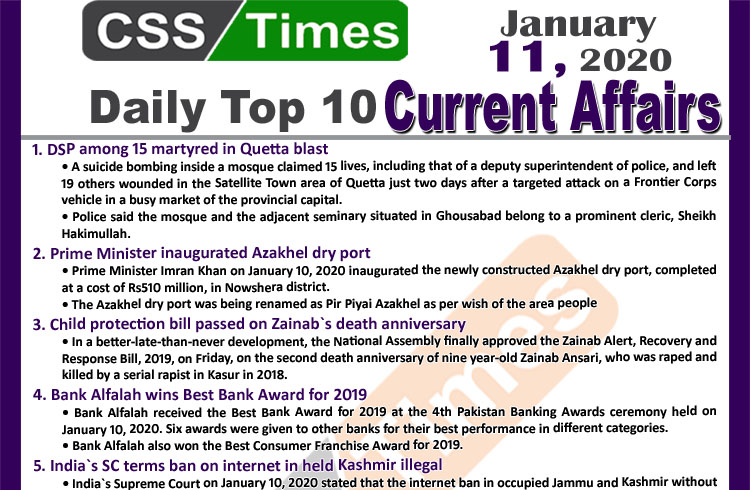 1. DSP among 15 martyred in Quetta blast

• A suicide bombing inside a mosque claimed 15 lives, including that of a deputy superintendent of police, and left 19 others wounded in the Satellite Town area of Quetta just two days after a targeted attack on a Frontier Corps vehicle in a busy market of the provincial capital.
• While the January 10, 2020 attack had been claimed by Hizbul Ahrar, the AFP wire service says that responsibility for the Friday bombing was claimed by the militant Islamic State (IS) group citing the SITE intelligence group. According to AFP, spokesman for the Balochistan government Liaquat Shahwani in a late-night statement confirmed that it was a suicide attack.
• Police said the mosque and the adjacent seminary situated in Ghousabad belong to a prominent cleric, Sheikh Hakimullah.

• Prime Minister Imran Khan on January 10, 2020 inaugurated the newly constructed Azakhel dry port, completed at a cost of Rs510 million, in Nowshera district.
• The Rs510 million Azakhel dry port project would promote business and trade in Khyber Pakhtunkhwa.He said he would like to suggest that the Peshawar-Jalalabad rail route be added to the ML-1 track
• The Azakhel dry port was being renamed as Pir Piyai Azakhel as per wish of the area people

• In a better-late-than-never development, the National Assembly finally approved the Zainab Alert, Recovery and Response Bill, 2019, on Friday, on the second death anniversary of nine year-old Zainab Ansari, who was raped and killed by a serial rapist in Kasur in 2018.
• The gory incident sparked outrage in the country and raised questions over the security of children and responsibilities on the part of the authorities concerned to prevent increasing child abuse in Pakistan.
• Interestingly, the bill had been sent to the NA Standing Committee on Human Rights, headed by Pakistan Peoples Party chairman Bilawal Bhutto-Zardari, in April last year and it took nine months for the panel to present it before the house.
• Under the bill, maximum punishment for child abuse and killing is life imprisonment, with a fine of Rs1 million, as the proposal of death penalty was rejected by the committee. The minimum sentence will be 10 years.

• India`s Supreme Court on January 10, 2020 stated that the internet ban in occupied Jammu and Kashmir without limiting it to a particular duration is not only a violation of the telecom rules, but also of freedom of speech and expression granted by the constitution.
• According to The Wire news portal, a three-judge bench comprising Justices N.V. Ramana, R. Subhash Reddy and B.R. Gavai pointed out that freedom of speech and expression includes the right to receive and disseminate information.
• They were responding to a clutch of petitions challenging the constitutionality of the Centre`s decision to impose a lockdown in India held Jammu and Kashmir following reading down of Article 370 in August last year

• A British female news presenter who was paid one sixth of the fee earned by a male presenter on a similar show won her discrimination case against the BBC on January 10, 2020.
• An employment tribunal ruled the corporation failed to prove the disparity in pay between Samira Ahmed and Jeremy Vine was `because of a material factor which did not involve subjecting the claimant to sex discrimination`.
• Both journalists present shows where the viewers are given a chance to air their opinions. The BBC is regularly scrutinised over the amounts it pays top stars and has also faced several major stories about female staff being paid less than their male equivalents.
• Ahmed, who argued she was owed almost 700,000 ($914, 000, 825,000 euros) in back pay, welcomed the ruling

7. Iran to analyse flight data itself as missile blamed for air crash

• Iran said on January 11, 2020 it wanted to download black box recordings itself from a Ukrainian airliner that crashed, killing all 176 people aboard, after Canada and others said the plane was brought down by an Iranian missile, probably by mistake.
• Iran, which has denied the Boeing 737-800 was downed by a missile, said it could take one or two months to extract information from the voice and flight data recorders. It said it could ask Russia, Canada, France or Ukraine if it needed help. Tehran also said the probe might take one or two years.
• The Ukraine International Airlines flight to Kiev from Tehran crashed on Wednesday, when Iran was on alert for a US military response hours after firing missiles at US targets in Iraq

• Prince Harry`s wife Meghan has returned to Canada following the couple`s bombshell announcement that they were quitting their frontline royal duties, it emerged on January 10, 2020, as the monarch held urgent talks with her family to resolve the crisis.
• The Duke and Duchess of Sussex spent an extended Christmas holiday in Canada with their son before returning to break the news this week that they would `step back` their royal roles.

9. Pakistan one of the safest places in the world: Chris Gayle

• Flamboyant West Indies batting superstar Chris Gayle has termed Pakistan as `one of the safest places in the world`.
• The 40-year-old, who is currently playing in the Bangladesh Premier League (BPL) for Chattogram Challengers was replying to a reporters query in Dhaka, who asked him whether Pakistan was a safe country for cricket.
• `Pakistan is one of the safest places right now in the world. They say you will get presidential security so you are in good hands,` he said.
• Pakistan successfully hosted Sri Lanka for a two-match ICC Test Championship series in December 2019. The Sri Lankan players enjoyed their stay in Pakistan.

• Cricket legend Shane Warne`s `baggy green` cap sold at an auction for more than Aus$1 million (nearly $700,000) on January 10, 2020, with all funds going to help victims of bushfires raging in Australia.
• The spin legend wore the cap during his 145-Test career, in which he took more than 700 wickets, and said he was blown away after a late bidding war pushed the price to Aus$1,007,500.
• It far exceeded the Aus$425,000 paid at auction for the cap belonging to the legendary Donald Bradman when that was sold for charity in 2003.
• `Thank you so much to everyone that placed a bid & a huge Thank you/ congrats to the successful bidder you have blown me away with your generosity and this was way beyond my expectations,` he tweeted 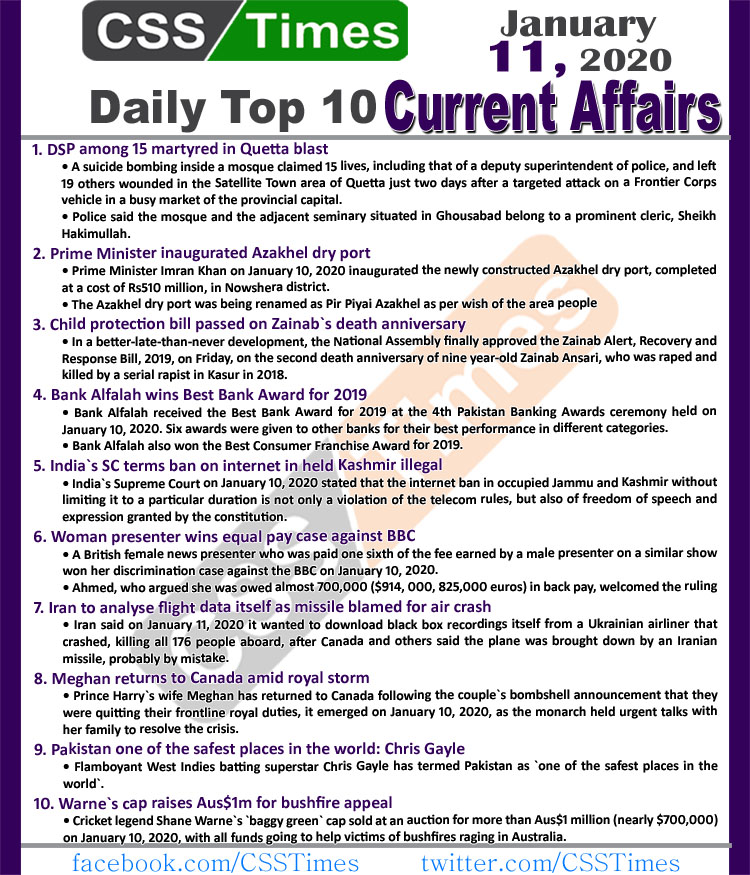