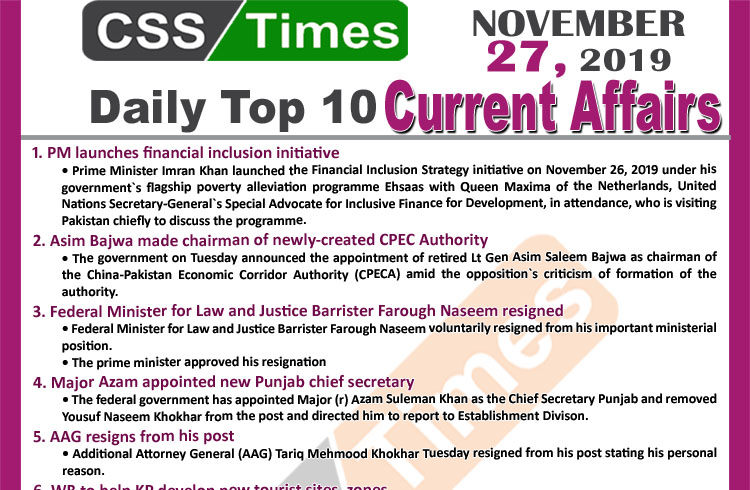 • Prime Minister Imran Khan launched the Financial Inclusion Strategy initiative on November 26, 2019 under his government`s flagship poverty alleviation programme Ehsaas with Queen Maxima of the Netherlands, United Nations Secretary-General`s Special Advocate for Inclusive Finance for Development, in attendance, who is visiting Pakistan chiefly to discuss the programme.
• `We are pursuing policies that will help the poor section of society under various programmes, hence we launched Ehsaas, which has compassion as its core ingredient,` said the premier at the inauguration ceremony.
• In his speech, he criticised a worldwide system in which rich nations were getting richer and poor countries poorer. `This is the biggest curse of this universe

• The government on Tuesday announced the appointment of retired Lt Gen Asim Saleem Bajwa as chairman of the China-Pakistan Economic Corridor Authority (CPECA) amid the opposition`s criticism of formation of the authority.
• According to a notification issued by the Establishment Division, the competent authority appointed retired Lt Gen Bajwa as chairman of the CPECA, which comes under the planning and development ministry.
• `The new chairperson will get MP-I scale for a period of four years from the date of assuming the charge of the office with immediate effect and until further orders,` it stated.
• Retired Lt Gen Bajwa had served as Commander Southern Command before his retirement. He remained director general of the Inter-Services Public Relations from 2012 to 2016

• Federal Minister for Law and Justice Barrister Farough Naseem voluntarily resigned from his important ministerial position.
• The prime minister approved his resignation
• Farogh Naseem will present the government’s stance in the court along with Attorney General Anwar Mansoor Khan on the issue.

• Additional Attorney General (AAG) Tariq Mehmood Khokhar Tuesday resigned from his post stating his personal reason.
• Tariq Khokhar was appointed by the government in July 2018, for the Islamabad High Court (IHC). He had filed the petition on behalf of the government seeking to postpone the judgment against former president General (retd) Pervez Musharraf in the Islamabad High Court.
• The former additional attorney general while submitting his resignation said he was resigning from his post owing to personal reasons. Tariq Khokhar had also been serving as Deputy Attorney General for Pakistan and Additional Advocate General Punjab

• The Ministry of Foreign Affairs will host a two-day ‘Envoys Conference’ focused on Africa.
• President Arif Alvi will address the Inaugural Session of the conference. Pakistan’s relations with African nations have always been characterised by cordiality, mutual trust and understanding.
• Consistent with the vision of the leadership, and priorities of the government, the conference aims at deepening Pakistan’s engagement with Africa in diverse fields.
• The conference shall bring together the Pakistani Envoys posted in Africa with important stakeholders including senior leadership from relevant Ministries and Departments and representatives of the private sector.
• Africa is the second largest continent of the world with 20 per cent of the world’s landmass and 54 sovereign States, with 1.2 billion people and the largest youth population on the globe.

• Zeeshan Khanzada of the ruling Pakistan Tehreek-i-Insaf was elected a senator on November 26, 2019 in a one-sided contest against Farzand Ali Khan of the Pakistan Peoples Party, who was the joint candidate of the opposition in the Khyber Pakhtunkhwa Assembly.
• Three lawmakers of the Jamaati-Islami didn`t cast vote as the party had announced the boycott of the contest. Four members of the Balochistan Awami Party also voted for the PTI candidate.
• The seat was declared vacant following the resignation of PPP Senator Khanzada Khan, who joined the ruling party recently.
• Prime Minister Imran Khan compensated Khanzada Khan by nominating his son, Zeeshan Khanzada, for the vacancy. The unofficial results show that Zeeshan Khanzada of the PTI secured 104 votes, while his rival candidate, Farzand, polled 31 votes. Four votes were rejected.
• A total of 139 MPAs cast vote in the 145-member house in the session chaired by Provincial Election Commissioner Pir Maqbool Ahmad.

• Pakistan and the World Bank on November 26, 2019 signed five loan agreements of $787 million for development projects, majority of them for Karachi uplif t.
• The agreements were signed by Economic Affairs Division secretary Noor Ahmed, World Bank`s country director in Islamabad Patchamuthu Illangovan and the representatives of governments of Sindh and Khyber Pakhtunkhwa and the National Transmission and Dispatch Company Ltd. Minister for Economic Affairs Hammad Azhar witnessed the signing ceremony.
• The World Bank will provide $652m for three development projects in Karachi to support urban mobility, urban management and service delivery, improve water and sewerage services, tourism and power sectors.
• The first loan of $382m was inked for Karachi Mobility (Yellow Line) Project that is expected to improve mobility, accessibility and safety along the yellow line Bus Rapid Transit (BRT) corridor in Karachi.

• The Saudi-led coalition fighting in Yemen said on November 26, 2019 it has released 200 Houthi rebels to advance a UN-brokered deal aimed at ending the war in the Arab world`s poorest country.
• Coalition spokesman Col. Turki al-Malki said in a statement that the move was aimed at paving the way for a larger and long-delayed prisoner swap agreed upon last December.
• Rebel leader Mohammed Ali al Houthi welcomed the move, calling on the coalition to release all war prisoners.
• The coalition has been battling the Iran-backed Houthis on behalf of Yemen`s internationally recognised government since 2015. The war has killed over 100,000 people and created the world`s worst humanitarian crisis, leaving millions suffering from food and medical care shortages 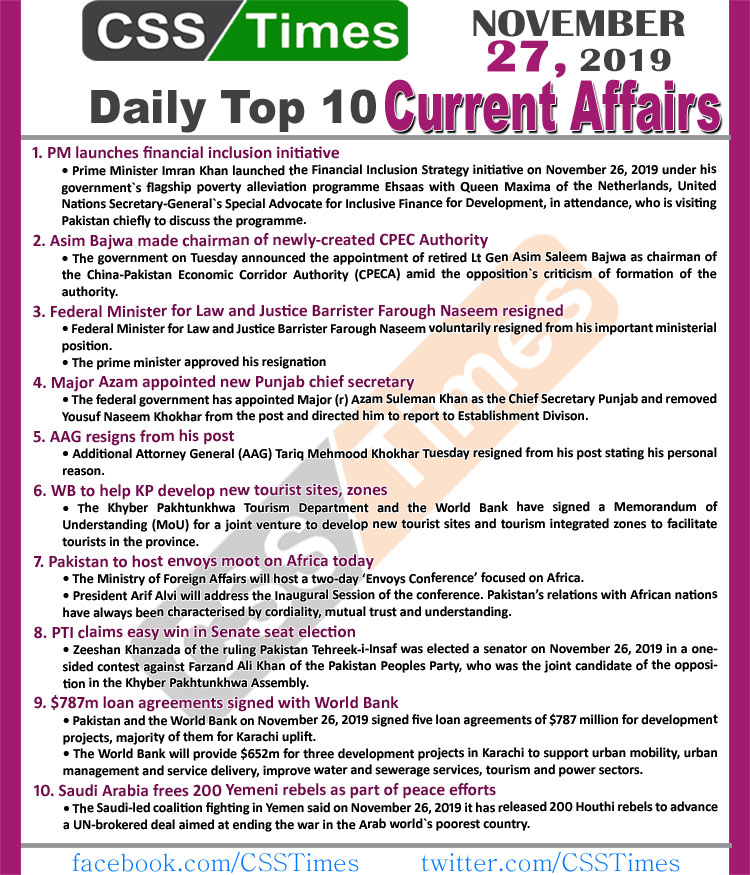