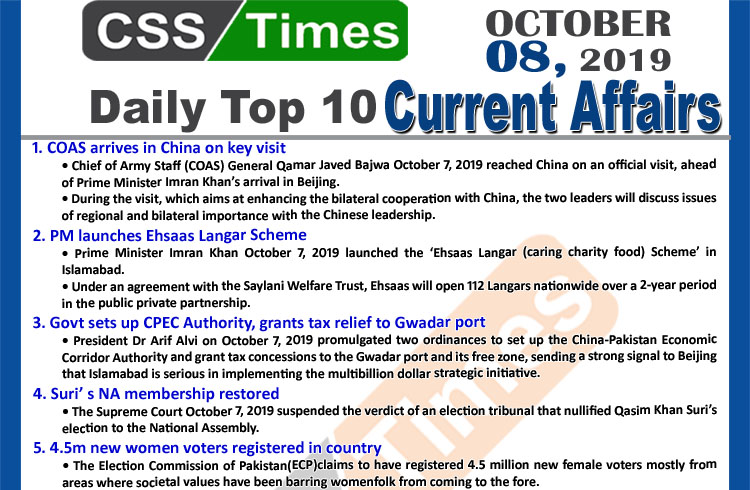 • Chief of Army Staff (COAS) General Qamar Javed Bajwa October 7, 2019 reached China on an official visit, ahead of Prime Minister Imran Khan’s arrival in Beijing.
• During the visit, which aims at enhancing the bilateral cooperation with China, the two leaders will discuss issues of regional and bilateral importance with the Chinese leadership.
• “The army chief is scheduled to meet the Chinese military leadership including the Peoples Liberation Army commander, vice chairman of the Central Military Commission and commander Southern Theater Command,” said the ISPR.
• General Bajwa will also join the prime minister’s meetings with Premier Li Keqiang and President Xi Jinping, the military’s media wing added.

• Prime Minister Imran Khan October 7, 2019 launched the ‘Ehsaas Langar (caring charity food) Scheme’ in Islamabad.
• Under an agreement with the Saylani Welfare Trust, Ehsaas will open 112 Langars nationwide over a 2-year period in the public private partnership.
• The Langars are meant to serve meals to the poorest and most vulnerable segments of the society, especially daily wage labourers.
• The first Langar was opened in Islamabad on October 7, 2019, where at least 600 people will be provided free meals daily. The Ehsaas scheme will now be extended countrywide with as many as 112 Langar schemes being set up over the period of two years to feed millions of people lacking food in particular in- Karachi, Hyderabad, Faisalabad, Rawalpindi, Quetta and Peshawar. The Langar scheme has been designed with the ethos to contribute substantively to SDG 1 and SDG 2 i.e. No poverty and Zero Hunger respectively.

• President Dr Arif Alvi on October 7, 2019 promulgated two ordinances to set up the China-Pakistan Economic Corridor Authority and grant tax concessions to the Gwadar port and its free zone, sending a strong signal to Beijing that Islamabad is serious in implementing the multibillion dollar strategic initiative.
• The ordinances were promulgated on the eve of Prime Minister Imran Khan’s visit to China where he is scheduled to discuss economic and political matters of mutual interests with the friendly country’s leadership. “The CPEC Authority Ordinance 2019” and “The Tax Laws (Amendment) Ordinance 2019” are aimed to set up a new body to oversee and implement CPEC and give income tax, sales tax and custom duties exemptions to Gwadar port and Gwadar Free Zone.

• The Supreme Court October 7, 2019 suspended the verdict of an election tribunal that nullified Qasim Khan Suri’s election to the National Assembly.
• A three-member bench of the apex court, headed by Justice Umar Ata Bandial and comprised Justice Faisal Arbab and Justice Ijazul Ahsan, heard the appeal filed by Qasim Suri and issued notices to the parties in the case. The decision was earlier passed by an election tribunal of the Balochistan High Court (BHC).
• During the course of proceedings, the court also suspended the Election Commission of Pakistan’s decision to denotify him as a member of the National Assembly.
• The court also asked the election commission not to issue the election schedule for NA-265 (Quetta-II).

• The Election Commission of Pakistan(ECP)claims to have registered 4.5 million new female voters mostly from areas where societal values have been barring womenfolk from coming to the fore.
• `We have been launching awareness campaigns in Balochistan and Khyber Pakhtunkhwa`s tribal districts for the last two years to motivate women to come out to use their right to franchise. The drive has proved a success as 4.5m new female voters have so far been registered, mostly from these areas, ECP additional director general Nadeem Qasim told.

• The Ministry of Law and Justice on October 7, 2019 got a new boss as acting charge of the secretary was withdrawn from Arshad Farooq Fahim and given to additional secretary Khashihur Rehman.
• Fahim, a senior joint secretary, was earlier working as spokesman for the law ministry.
• He has now been made an officer on special duty and was directed to report to the Establishment Division.
• He was in the limelight since last few days after he moved an application seeking acquittal in the Rs1.68 billion corruption scam related to Drug Regulatory Authority of Pakistan (Drap) which is pending before the accountability coud of Islamabad

• US forces in Syria started pulling back on October 7, 2019 from Turkish border areas, opening the way for Ankara`s threatened military invasion and heightening fears of a jihadist resurgence.
• The withdrawal from key positions along Syria`s northern border came after the White House said it would step aside to allow for a Turkish operation President Recep Tayyip Erdogan has warned could come at any moment.
• The move marks a major shift in US policy, and effectively abandons the Kurds, Washington`s main ally in Syria during the years-long battle against the militant Islamic State group.
• The Syrian Democratic Forces (SDF), the Kurdish-led militia that controls much of northeastern Syria, said early on Monday in a statement that `US forces withdrew from the border areas with Turkey`.

• Portugal`s Socialist Party had little time on October 7, 2019 to savor its general election victory, as tough negotiations for parliamentary support loomed and the economy braces for leaner times.
• The center-left Socialists won Sunday`s general election with 36.6 percent of the vote and are preparing to govern for another four years. The main opposition Social Democratic Party came second with almost 28pc. Portugal, unlike some other European Union nadons, has not seen a surge in nationalistic, far-right or populist parties, although one such party earned a seat for the first time.

9. Three get Nobel Medicine prize for learning how cells use oxygen

• Two Americans and a British scientist won the 2019 Nobel Prize for Physiology or Medicine for discovering how the body’s cells sense and react to oxygen levels, work that has paved the way for new strategies to fight anemia, cancer and other diseases, the Nobel Committee said.
• Drs. William G. Kaelin Jr. of Harvard University, Gregg L. Semenza of Johns Hopkins University and Peter J. Ratcliffe at the Francis Crick Institute in Britain and Oxford University will share equally the 9 million kronor ($918,000) cash award, the Karolinska Institute said.
• It is the 110th prize in the category that has been awarded since 1901.
• Their work has “greatly expanded our knowledge of how physiological response makes life possible,” the committee said, explaining that the scientists identified the biological machinery that regulates how genes respond to varying levels of oxygen.

• Sri Lanka`s second-string side humbled Pakistan by 35 runs at the Gaddafi Stadium in the second Twenty20 International on October 7, 2019 to seal the series and leave the hosts with only pride to play for in the third match of the series on October 9, 2019.
• The defeat will hurt Pakistan, the world`s top ranked T20 side, as the loss came against a Sri Lankan team which travelled to the country without some of its biggest names.
• It also raises questions over some of the decisions made by new head coach-cum-chief selector Misbahul-Haq.
• The defeat would`ve been even more embarrassing if it hadn`t been for a 75-run partnership between Imad Wasim and Asif Ali with Pakistan at one stage reduced to 52-5 after a stunning three-wicket over by Wanindu Hasaranga as they chased 183. 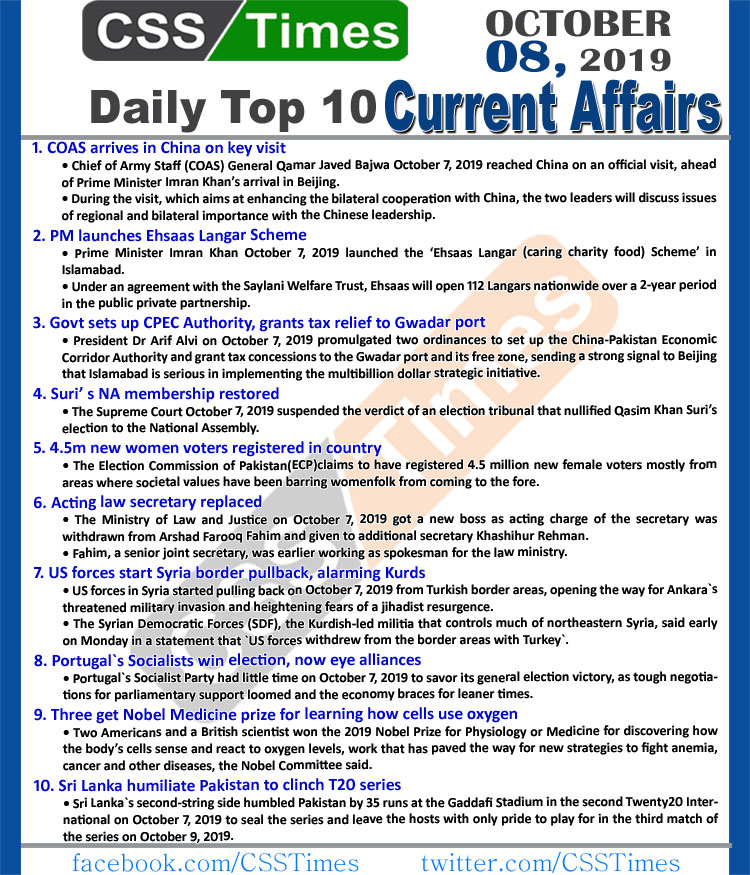