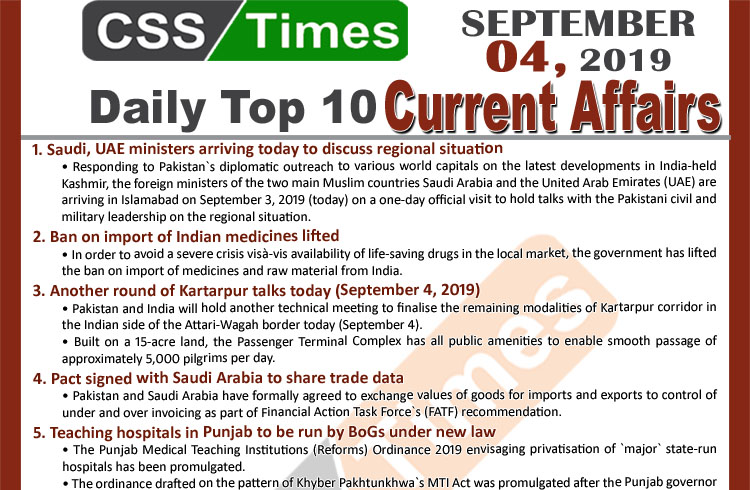 • Responding to Pakistan`s diplomatic outreach to various world capitals on the latest developments in India-held Kashmir, the foreign ministers of the two main Muslim countries Saudi Arabia and the United Arab Emirates (UAE) are arriving in Islamabad on September 3, 2019 (today) on a one-day official visit to hold talks with the Pakistani civil and military leadership on the regional situation.
• This was stated by Foreign Minister Shah Mehmood Qureshi while talking to reporters at the Parliament House before heading to the Foreign Office to preside over the inaugural meeting of the special Kashmir Cell.
• `The two principal players of the OIC (Organisation of Islamic Cooperation) are coming (to Islamabad) tomorrow (Wednesday).
• One chairs summit level (meetings) and the other heads ministerial segment,` Mr Qureshi said while referring to the upcoming visits of Saudi Minister of State for Foreign Affairs Adel bin Ahmed al-Jubeir and Minister of Foreign Affairs and International Cooperation of the UAE Sheikh Abdullah bin Zayed bin Sultan al-Nahyan.

• In order to avoid a severe crisis visà-vis availability of life-saving drugs in the local market, the government has lifted the ban on import of medicines and raw material from India.
• Statutory regulatory orders (SROs) issued by the Ministry of Commerce and Textile state that the ban on trade with India would remain effective; however, it would not apply to therapeutic products regulated by the Drug Regulatory Authority of Pakistan (DRAP).
• It is worth mentioning that after New Delhi`s decision to annex occupied Kashmir on Aug 5, the Pakistan government had on Aug 9 decided to suspend all kinds of trade with India. Initially, the pharmaceutical industry had appealed to the government to relax rules and allow Indian goods imported before the decision. The government relaxed the rules and the goods already arrived in Pakistani airports/seaports had been cleared.

• Pakistan and India will hold another technical meeting to finalise the remaining modalities of Kartarpur corridor in the Indian side of the Attari-Wagah border today (September 4).
• In the second meeting, which took place on July 14, the two sides had agreed to complete the construction of the 4.19 kilometres long four-lane highway connecting the zero point of the Kartarpur corridor to Gurdaspur-Amritsar Highway by September 30, while the Passenger Terminal Complex at Dera Baba Nanak will be completed by October 31.
• Built on a 15-acre land, the Passenger Terminal Complex has all public amenities to enable smooth passage of approximately 5,000 pilgrims per day.
• The Kartarpur corridor along the India-Pakistan border is three kilometres away from Gurdaspur in Punjab, India. Once opened, this corridor will allow Sikh pilgrims direct access to the historic Gurdwara Darbar Sahib in Kartarpur in Pakistan, where Guru Nanak Dev passed away in 1539.

• Pakistan and Saudi Arabia have formally agreed to exchange values of goods for imports and exports to control of under and over invoicing as part of Financial Action Task Force`s (FATF) recommendation.
• Saudi Arabia will become Pakistan`s 23rd major trading partner with whom the country will formally into an agreement to monitor and control illicit financial flows and currency smuggling as part of the recommendations of money laundering watchdog.
• The FATF has recommended that narcotics, smuggling, under and over invoicing are the primary sources of illicit financial flows (IFFs), which is inherently a global phenomenon. Over invoicing is a serious threat and a tool used for whitening of black money.
• Pakistan already has agreements in places with 22 countries, including the USA, China, Malaysia, UAE etc for online sharing of information on real-time basis to curb under and over invoicing.

5. Teaching hospitals in Punjab to be run by BoGs under new law

• The Punjab Medical Teaching Institutions (Reforms) Ordinance 2019 envisaging privatisation of `major` state-run hospitals has been promulgated.
• The ordinance drafted on the pattern of Khyber Pakhtunkhwa`s MTI Act was promulgated after the Punjab governor signed it on September 2, 2019 with the approval of Prime Minister Imran Khan.
• According to the MTI Ordinance, the government hospitals shall be run by fully empowered Board of Governors (BoGs) which shall consist of all members from the private sector.
• `The BoGs shall also have powers for the appointment of admin officials on key slots and appointment of senior faculty members.
• The post of principal shall be converted into Dean who shall be appointed by the BoG for a period of five years,` it says.
• Similarly, the document says, there shall be a Management Committee for each hospital, consisting of a hospital director, medical director, nursing and financedirectors and two members nominated by the BoG.

• A launching ceremony of the second state-of-the-art 2,300 tons corvettes vessel built for Pakistan Navy was held in Romania. Chief of Staff (Personnel) Vice Admiral Athar Mukhtar was the chief guest on the occasion.
• Corvettes laced with latest technology are multi-purpose platforms of medium size and tonnage. These are used for different operations including security patrol.

• Chairman National Account Bureau (NAB) Justice Javed Iqbal has directed strict action against a website www.pakistan.job.pk for cheating people on fake promise of recruiting them in the anti-graft watchdog.
• The chairman has taken strict notice of cheating people and directed the relevant director NAB to lodge a complaint against the (fake) website in Federal Investigation Agency (FIA) so that the cheater could be taken to the task.
• According to reports, the website was reportedly receiving applications from the people and allegedly receiving applications from them in the name of registration fee.

• New British Foreign Secretary Dominic Raab told the House of Commons that the human rights situation in Jammu and Kashmir following the lockdown of the region by the Modi government for over four weeks is “an international issue”.
• As soon as the UK parliament commenced proceedings on September 3, 2019 after a long summer recess, a barrage of aggressive questions from around 15 MPs greeted Raab from all sections of the house on the Modi administration’s treatment of people in Kashmir following abrogation of Jammu and Kashmir’s special status. The questioners included Emily Thornberry, the shadow foreign secretary, who raised the matter of unlawful “detentions” by Indian authorities. Replying to a question from Steve Baker, Conservative MP from Whycombe, Raab said, “The issue of human rights is not just a bilateral, or domestic issue for India or Pakistan – it is an international issue.” He added, “We should, with all our partners, expect internationally recognised standards of human rights to be complied with and respected.”
• Anne Main, another Conservative MP, compared the state of affairs in Kashmir to the Rohingya crisis. However, Raab repeatedly made statements which queried the BJP government’s democratic and human rights credentials.

• Bangladesh`s telecommunications regulatory body has asked operators to shut down cellphone services in sprawling camps in the southeast where hundreds of thousands of Rohingya refugees from Myanmar live, citing a security threat and illegal phone use, an official said on September 3, 2019.
• Zakir Hossain Khan, a spokesman for the Bangladesh Telecommunication Regulatory Commission, said they asked the operators to respond to the order within seven days.
• `The decision has been taken for national security reasons,` he said by phone.
• `We have been stunned to see that Rohingya refugees are using mobile phones illegally and we don`t have a clear understanding of the situation,` he said.

10. Rouhani rules out bilateral talks with US

• Iran’s president has ruled out ever holding bilateral talks with the US.
• “There have been a lot of offers for talks but our answer will always be negative,” Hassan Rouhani told MPs.
• But he said Iran would agree to resume multilateral talks if all US sanctions on Iran were lifted.
• US President Donald Trump has said he is open to renegotiating a 2015 nuclear deal between Iran and world powers which Mr Trump unilaterally abandoned last year, reinstating sanctions.
• The deal’s other parties – the UK, France, Germany, China and Russia – have attempted to keep it alive. But the sanctions put in place by Mr Trump have caused Iran’s oil exports to collapse, the value of its currency to plummet, and sent inflation soaring.In July, after Mr Trump tightened the sanctions on Iranian oil exports in an attempt to force it to negotiate, Iran suspended two commitments enshrined in the deal. 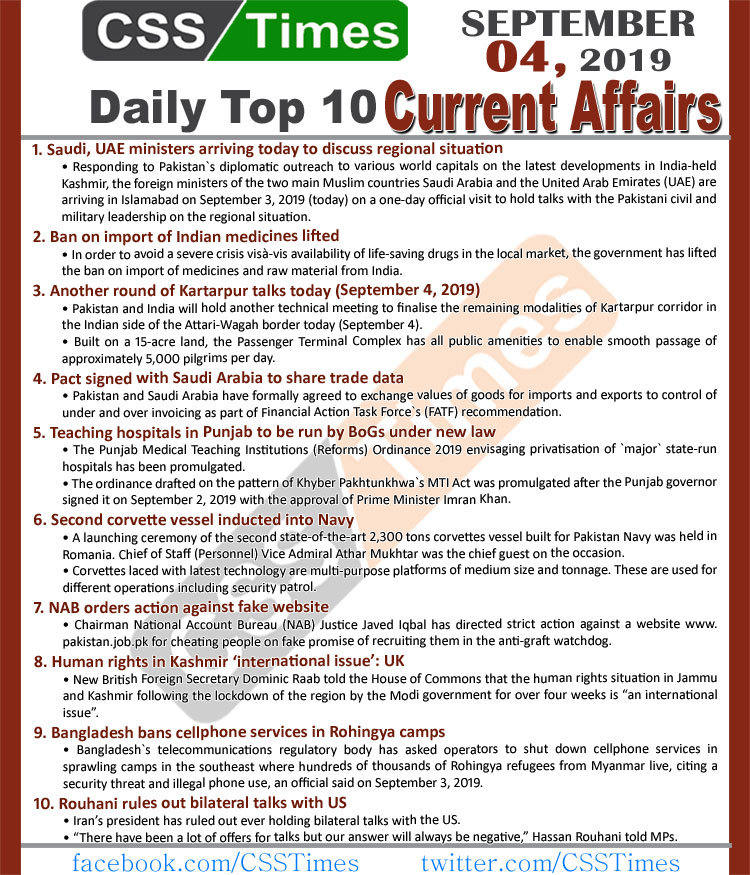