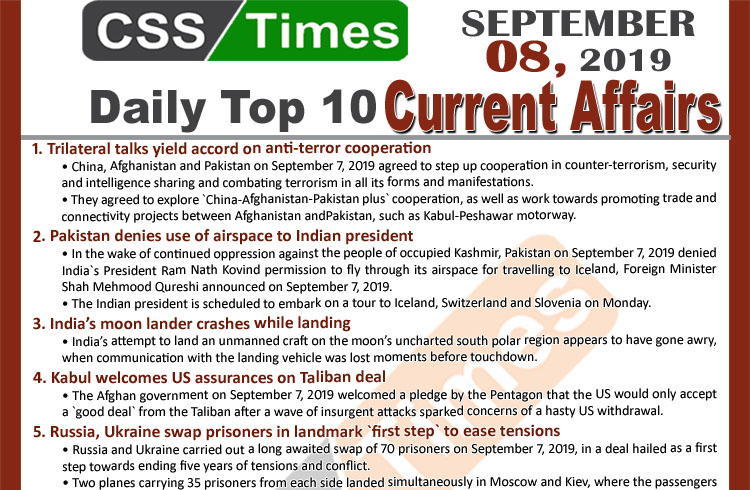 • China, Afghanistan and Pakistan on September 7, 2019 agreed to step up cooperation in counter-terrorism, security and intelligence sharing and combating terrorism in all its forms and manifestations.
• According to a joint statement issued at the conclusion of the third round of the Trilateral Foreign Ministers Dialogue, the three sides reaffirmed their commitment to further strengthening their relations and exploring new ways of deepening cooperation, including advancing connectivity under the Belt and Road Initiative, the Regional Economic Cooperation Conference on Afghanistan and other regional economic initiatives.
• They agreed to explore `China-Afghanistan-Pakistan plus` cooperation, as well as work towards promoting trade and connectivity projects between Afghanistan andPakistan, such as Kabul-Peshawar motorway.
• The three sides welcomed the progress made on implementation of projects agreed under the China-Afghanistan-Pakistan Practical Cooperation Dialogue (CAPPCD). They agreed to continue cooperation in the fields of economic development, capacity building and improving livelihood and people-to-people exchanges.

2. Pakistan denies use of airspace to Indian president

• In the wake of continued oppression against the people of occupied Kashmir, Pakistan on September 7, 2019 denied India`s President Ram Nath Kovind permission to fly through its airspace for travelling to Iceland, Foreign Minister Shah Mehmood Qureshi announced on September 7, 2019.
• `The decision, approved by Prime Minister Imran Khan, has been taken in view of India`sbehaviour,` Mr Qureshi told the state-run Pakistan Television. New Delhi`s `barbarism` in Kashmir was a serious issue that he would take up at the United Nations Human Rights Council, he added.
• The Indian president is scheduled to embark on a tour to Iceland, Switzerland and Slovenia on Monday.
• The decision came amidst heightened tensions between the two nuclear-armed neighbours after the Indian government unilaterally annulled the special status of disputed Jammu and Kashmir valley and split it into two territories. Along with the controversial move, India also stepped up repression in held Kashmir by deploying more troops in the area and imposing curfew and communication blackout leading to acute shortage of food and medicines in the region.

• India’s attempt to land an unmanned craft on the moon’s uncharted south polar region appears to have gone awry, when communication with the landing vehicle was lost moments before touchdown.
• “Communications from lander to ground station was lost,” said Kailasavadivoo Sivan, chairman of the Indian Space Research Organisation early on September 7, 2019. Data was still being analysed, he told a room full of distraught scientists at the agency’s tracking centre in Bengaluru.
• Prime minister Narendra Modi, who was present at the ISRO control centre, offered words of support to scientists before leaving the tracking centre. The mission, which aimed to carry out a soft landing on the moon, is the most complex and ambitious space project that India has embarked upon. Only three other countries – Russia, the US and China – have managed such a landing.
• The ISRO tweeted: “#VikramLander descent was as planned and normal performance was observed up to an altitude of 2.1 km. Subsequently, communication from Lander to the ground stations was lost. Data is being analyzed.”

• The Afghan government on September 7, 2019 welcomed a pledge by the Pentagon that the US would only accept a `good deal` from the Taliban after a wave of insurgent attacks sparked concerns of a hasty US withdrawal.
• During a wide ranging press conference in Paris earlier on Saturday US Defence Secretary Mark Esper sought to allay fears that Washington was looking for a quick exit from Afghanistan as it inches closer to a potential deal with the Taliban.
• Media organisations were given one week to stop transmitting `anti-Taliban advertisements` by the group`s military commission, a warning that was denounced by the Afghan government and western diplomats.
• In 2016, a Taliban suicide bomber rammed his car into a bus carrying employees of Tolo TV, the countrys largest private broadcaster, killing seven journalists.

• Russia and Ukraine carried out a long awaited swap of 70 prisoners on September 7, 2019, in a deal hailed as a first step towards ending five years of tensions and conflict.
• Two planes carrying 35 prisoners from each side landed simultaneously in Moscow and Kiev, where the passengers emerged under sunny skies.
• `We have taken the first step,` Ukrainian President Volodymyr Zelensky said on the tarmac after greeting and hugging former detainees. `We have to take all the steps to finish this horrible war.
• In emotional scenes at Kiev`s Boryspil airport, family members embraced and handed flowers to the former prisoners, many weeping with joy.

• A day after ex-strongman and founding leader Robert Mugabe died, the only clear sign that Zimbabwe was in mourning were flags flying at half mast.
• The streets and shops were packed, weddings and parties went ahead as planned. Most people were going about their usual business, trying to eke outliving. For while Mugabe is hailed for having led Zimbabwe to independence, for many Zimbabweans he is also the man who wrecked their economy, leaving them to live with the consequences.
• Commuter mini bus driver More Kondo, 30, was busy decanting petrol from a large jerrycan into a smaller container to share with a fellow driver.`If it were another leader, right now this country should have shut down to mourn,` he said. `But he was an autocrat

• Iran on September 7, 2019 said it now uses arrays of advanced centrifuges prohibited by its 2015 nuclear deal and can enrich uranium “much more beyond” current levels to weapons-grade material, taking a third step away from the accord while warning Europe has little time to offer it new terms.
• While insisting Iran doesn’t seek a nuclear weapon, the comments by Behrouz Kamalvandi of the Atomic Energy Organization of Iran threatened pushing uranium enrichment far beyond levels ever reached in the country. Prior to the atomic deal, Iran only reached up to 20%, which itself still is only a short technical step away from weapons-grade levels of 90%.
• The move threatened to push tensions between Iran and the U.S. even higher more than a year after President Donald Trump unilaterally withdrew America from the nuclear deal and imposed sanctions now crushing Iran’s economy. Mysterious attacks on oil tankers near the Strait of Hormuz, Iran shooting down a U.S. military surveillance drone and other incidents across the wider Middle East followed Trump’s decision.

9. China’s lunar rover travels over 284 meters on moon’s far side

• China’s lunar rover Yutu-2 has driven 284.66 meters on the far side of the moon to conduct scientific exploration on the virgin territory.
• Both the lander and the rover of the Chang’e-4 probe switched to its dormant mode for the lunar night on September 5, 2019 (Beijing time), according to the Lunar Exploration and Space Program Center of the China National Space Administration.
• China’s Chang’e-4 probe, launched on Dec. 8, 2018, made the first-ever soft landing on the Von Karman Crater in the South Pole-Aitken Basin on the far side of the moon on Jan. 3.
• A lunar day equals 14 days on Earth, a lunar night the same length. The Chang’e-4 probe switches to dormant mode during the lunar night due to lack of solar power.

• Seven South American countries have agreed measures to protect the Amazon river basin, amid global concern over massive fires in the world’s largest tropical forest.
• Bolivia, Brazil, Colombia, Ecuador, Guyana, Peru and Suriname signed a pact, setting up a disaster response network and satellite monitoring.
• At a summit in Colombia, they also agreed to work on reforestation.
• More than 80,000 fires have broken out in the Amazon rainforest this year.
• The seven nations also agreed to put more efforts into education and increase the role of indigenous communities.
• The countries were represented in Leticia by presidents, vice-presidents and ministers. 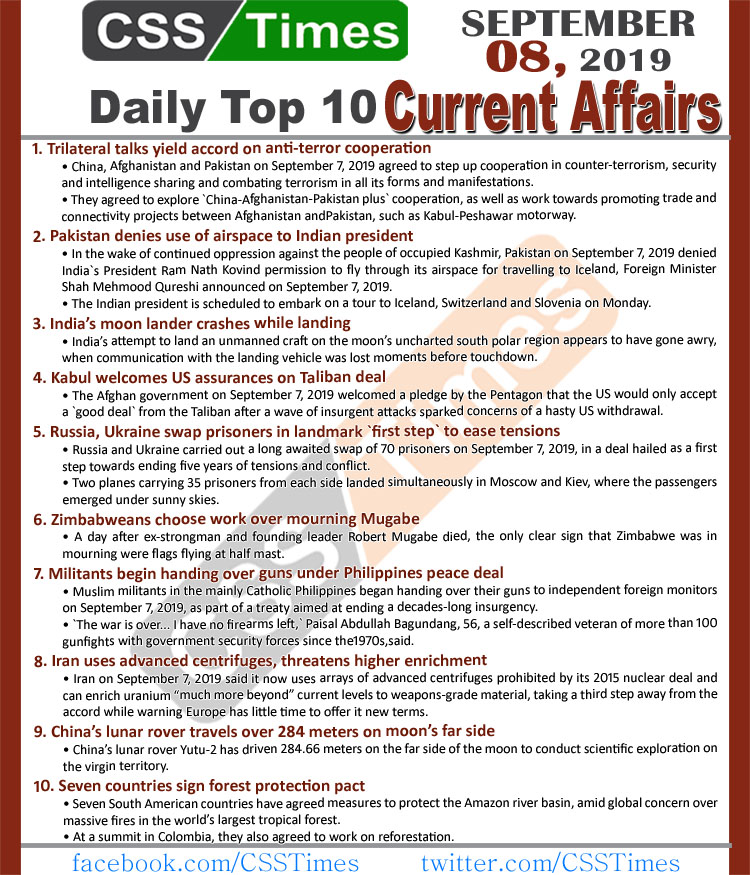