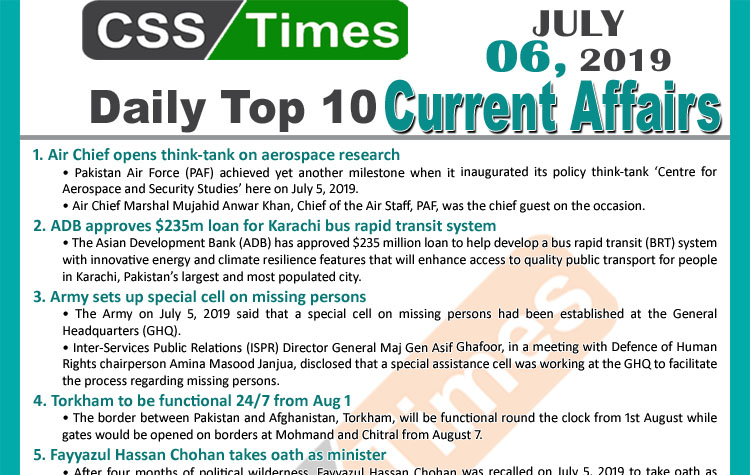 • Pakistan Air Force (PAF) achieved yet another milestone when it inaugurated its policy think-tank ‘Centre for Aerospace and Security Studies’ here on July 5, 2019.
• Air Chief Marshal Mujahid Anwar Khan, Chief of the Air Staff, PAF, was the chief guest on the occasion.
• The dimensions of aerospace power continue to expand day by day and with technologies and vast improvements taking place in air and space platforms, it has become an instrument of first choice.

• The Asian Development Bank (ADB) has approved $235 million loan to help develop a bus rapid transit (BRT) system with innovative energy and climate resilience features that will enhance access to quality public transport for people in Karachi, Pakistan’s largest and most populated city.
• This is project loan. The ADB would also start releasing funds for the budgetary support after approval of loan programme by International Monetary Fund (IMF).
• The ADB had already agreed to provide additional funds of $3.4 billion to Pakistan and $2.1 billion would be released this fiscal year. Similarly, he said, World Bank will also give additional funds to Pakistan. All these funds will be used for budgetary support.
• The ADB approved $235 million for Pakistan. The Karachi Bus Rapid Transit Red Line Project will deliver the 26.6-kilometer (km) Bus Rapid Transit Line Red Line corridor and associated facilities benefiting as many as 1.5 million people, about 10% of Karachi’s population, who live within a kilometer of a Red Line BRT station. More than 300,000 passengers per day are expected on the Red Line BRT routes.

• The Army on July 5, 2019 said that a special cell on missing persons had been established at the General Headquarters (GHQ).
• Inter-Services Public Relations (ISPR) Director General Maj Gen Asif Ghafoor, in a meeting with Defence of Human Rights chairperson Amina Masood Janjua, disclosed that a special assistance cell was working at the GHQ to facilitate the process regarding missing persons.
• The Defence of Human Rights is a non-governmental organisation that works on enforced disappearances. The ISPR chief met Ms Janjua to brief her on the efforts of the government and security forces for resolving the matter.

• The border between Pakistan and Afghanistan, Torkham, will be functional round the clock from 1st August while gates would be opened on borders at Mohmand and Chitral from August 7.
• In light of federal government directions Pak-Afghan border (Torkham) would be functional from 1st August round the clock adding additional staff has been deputed at the site.
• The deputation of more staff of Customs and KP Police and concerned law enforcement departments is underway at Torkham border.

• After four months of political wilderness, Fayyazul Hassan Chohan was recalled on July 5, 2019 to take oath as provincial minister.
• Acting Governor Ch Parvez Elahi administered the oath at a simple ceremony held at the Governor House. Punjab Chief Minister Usman Buzdar also attended the ceremony.
• Chohan had to resign as information minister in March this year following his outburst against the Hindus. Chohan had later justified his utterances saying they were directed against the Hindus living in India and not against the Hindu minority in Pakistan.

• Amid growing needs to modernise the armed forces, the Indian government has kept the defence budget at the level announced during the interim budget in February.
• The defence allocation for 2019-20 is just two percent more in comparison to the budget of 2018-19, leaving the country’s armed forces high and dry on modernisation in comparison to China and Pakistan.
• The budget document that was presented by Finance Minister Nirmala Sitharaman in the parliament noted that the government will spend around $43 billion in the financial year 2019-20 ending in March 2020, in comparison to $41 billion in 2018-19.
• Nevertheless, the minister made changes in the taxation of imported defence equipment and said that equipment not “Made in India” is now exempt from basic customs duties.
• “Defence has an immediate requirement of modernisation and upgrading.

• An Iranian official has said a British oil tanker should be seized, if a detained Iranian ship is not released.
• British Royal Marines helped officials in Gibraltar to seize the super-tanker Grace 1 on Thursday, after it was suspected of carrying oil from Iran to Syria, in breach of EU sanctions.
• Iran later summoned the British ambassador in Tehran to complain about what it said was a “form of piracy”.

• Russia successfully launched its Soyuz-2.1a carrier rocket on July 5, 2019 with a hydro meteorological satellite and 32 small satellites, the Russian state space corporation Roscosmos said.
• The rocket blasted off at 8:41 a.m. Moscow time (0541 GMT) from the Vostochny spaceport in the Far Eastern Amur Region, it said in a statement.
• Russia’s Meteor-M No.2-2 hydro meteorological satellite was successfully put into a target orbit with a height of about 832 km, Roscosmos said in a live broadcast.
• The satellite will be able to provide images of clouds, the surface of the Earth, ice and snow covers in the visible, infrared and microwave ranges.

9. Pakistan bow out with Bangladesh hammering

• Pakistan hammered Bangladesh by 94 runs at Lord’s but failed in their highly unlikely task of pipping New Zealand to the last World Cup semi-final place.
• The 1992 winners needed victory by a record margin of at least 308 runs to finish fourth on a better net run-rate. An Imam ul-Haq century and 96 from Babar Azam saw them post 315-9 before they dismissed Bangladesh for 221.
• Shakib Al Hasan top-scored with 64 for the Tigers but seamer Shaheen Afridi (6-35) produced a match-winning spell. Pakistan could not reach the semi-finals once Bangladesh reached 8-0 in the second over of their chase, confirming New Zealand in the last four with Australia, India and England.

• Veteran allrounder Shoaib Malik on July 5, 2019 announced his retirement from ODI cricket after Pakistan’s thumping 94-run win against Bangladesh in the ICC Cricket World Cup 2019 at Lord’s in London. The victory was not enough for Pakistan to qualify as New Zealand went through owing to a better net run-rate.
• Speculation was rife that Malik will call time on his ODI career, which spans across more than a decade right from the time he made his debut in 1999 against West Indies at Sharjah.
• The 37-year-old Malik was dropped from the squad after failing in his third game. He made eight against England and then fell for zero in back-to-back games against Australia and India. His golden ball duck against India at Old Trafford on June 16 would be the last of his ODI career. 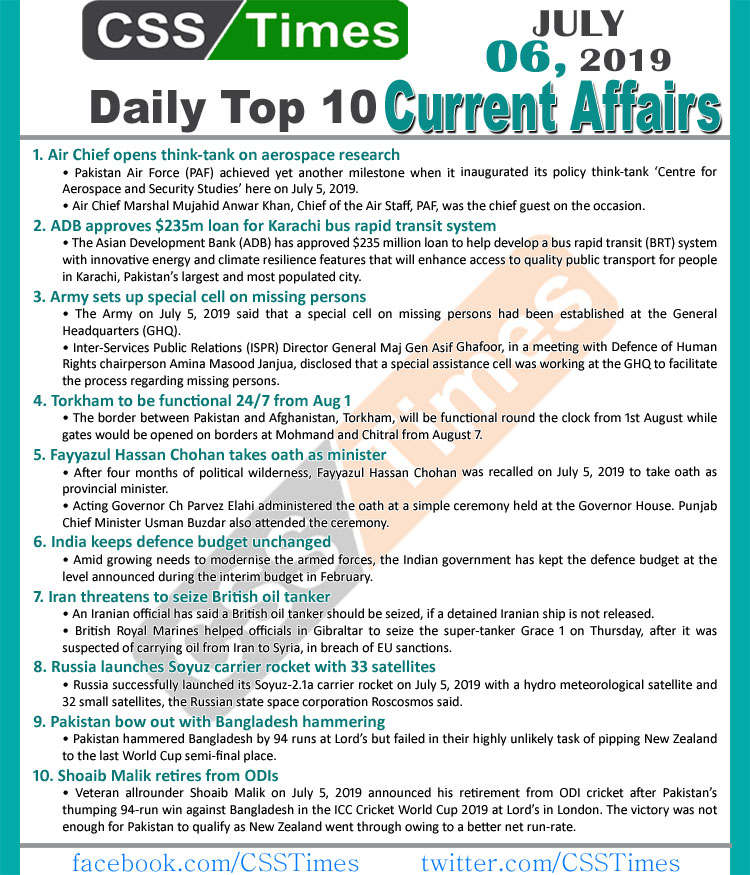