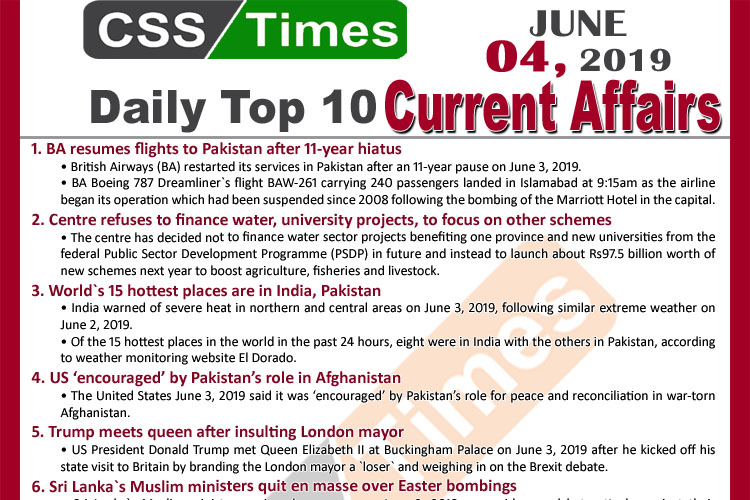 • British Airways (BA) restarted its services in Pakistan after an 11-year pause on June 3, 2019.
• BA Boeing 787 Dreamliner`s flight BAW-261 carrying 240 passengers landed in Islamabad at 9:15am as the airline began its operation which had been suspended since 2008 following the bombing of the Marriott Hotel in the capital.
• The launch of the thrice-a-week service from London`s Heathrow Airport to Islamabad International Airport was welcomed by British and Pakistani officials, all saying it would boost tourism, trade and business.
• Some of the passengers who travelled in the flight said it was a pleasant journey and would prefer the airline when travelling to Islamabad.

2. Centre refuses to finance water, university projects, to focus on other schemes

• The centre has decided not to finance water sector projects benefiting one province and new universities from the federal Public Sector Development Programme (PSDP) in future and instead to launch about Rs97.5 billion worth of new schemes next year to boost agriculture, fisheries and livestock.
• Most of the new schemes for agriculture, fisheries and livestock have been finalised by a special task force led by PTI leader Jehangir Khan Tarin. These schemes, many of them still unapproved or under process, have been allocated Rs10.453 in PSDP 2019-20.
• `Financing of water sector projects benefiting one province will be discouraged from the federal PSDP except financing of small dams in Balochistan`, a senior official explained as key policy takeaways of the recent National Economic Council meeting presided over by the prime minister and represented by provincial leadership.

• India warned of severe heat in northern and central areas on June 3, 2019, following similar extreme weather on June 2, 2019.
• Of the 15 hottest places in the world in the past 24 hours, eight were in India with the others in Pakistan, according to weather monitoring website El Dorado.
• Churu, a city in the west of the northern state of Rajasthan, recorded the country`s highest temperature of 48.9 Celsius on June 3, 2019, according to the Meteorological Department.
• Churu has issued a heat wave advisory and government hospitals have prepared emergency wards with extra air conditioners, coolers and medicines.
• The three-month, premonsoon season, which ended on May 31, was the second driest in the last 65 years, India`s only private forecaster, Skymet, said, with a national average of 99 mm of rain against the normal average of 131.5 mm for the season.

4. US ‘encouraged’ by Pakistan’s role in Afghanistan

• The United States June 3, 2019 said it was ‘encouraged’ by Pakistan’s role for peace and reconciliation in war-torn Afghanistan.
• “The United States continued to be encouraged by the role Pakistan has played to advance the peace process in Afghanistan,” said a US embassy statement issued at the conclusion of a two-day visit by Special Representative for Afghanistan Reconciliation Zalmay Khalilzad to Pakistan.
• The embassy said that the two sides reviewed developments in the Afghan peace process. “Ambassador Khalilzad briefed Pakistani officials on the substantial progress made in talks over the last month and planned next steps,” it said. “Ambassador Khalilzad and Pakistani officials also discussed the benefit of improved Pakistan-Afghanistan relations in reaching, implementing, and sustaining a durable peace.”
• Khalilzad met Prime Minister Imran Khan, Additional Secretary Foreign Affairs Aftab Khokher and Chief of Army Staff General Qamar Javed Bajwa.

• US President Donald Trump met Queen Elizabeth II at Buckingham Palace on June 3, 2019 after he kicked off his state visit to Britain by branding the London mayor a `loser` and weighing in on the Brexit debate.
• With the sound of a 41-gun royal salute ringing across the lawn from nearby Green Park, the queen welcomed Trump and his wife Melania before they were treated to a military guard of honour.
• The monarch later hosted a private lunch for the couple and showed them the royal art collection, ahead of a glittering state banquet in the evening.
• But the day began with controversy as, even before his plane touched down, the president lambasted London Mayor Sadiq Khan, who has been highly critical of the red carpet welcome.

• Sri Lanka`s Muslim ministers resigned en masse on June 3, 2019 over widespread hate attacks against their community in the wake of Easter Sunday bombings that hit the majority Buddhist nation.
• The resignation of nine government lawmakers, several of them cabinet ministers, came after a Buddhist monk lawmaker supporting President Maithripala Sirisena demanded the sacking of three top Muslim politicians.
• Demonstrations by several thousand people gripped the central pilgrim city of Kandy as monk Athuraliye Ratana insisted governors of two provinces and a cabinet minister be sacked over their alleged involvement with jihadists responsible for the bombings.
• Even as shops and offices were closed in the city, 115 kilometres east of Colombo, the two provincial governors stepped down, Sirisena`s office said.

• Austria swore in its first woman chancellor on June 3, 2019 at the head of an interim government that will serve until after an election expected in September.
• The 69-year-old Brigitte Bierlein, previously the head of Austria`s top court, will lead a cabinet of non-partisan experts.

8. Indian air force plane with 13 on board missing near China border

• An Indian air force aircraft with 13 people on board went missing on June 3, 2019 in remote northeastern mountains bordering China.
• The AN-32 aircraft, which is typically used for transport, took off from Assam state`s Jorhat town for Menchuka in Arunachal Pradesh state but lost contact with ground agencies at around 1pm.
• A total of eight crew and five passengers were on board. The air force had begun a search, including deploying a Sulchoi combat jet.

• A genetic mutation that a Chinese scientist tried to create in twin girls born last year, in the hope of protecting them against HIV, has been found to raise the risk of an early death.
• He Jiankui at the Southern University of Science and Technology in Shenzhen sparked an international outcry in November when he announced the birth of twin girls, Lulu and Nana, after he edited the DNA in their embryos. The procedure was meant to mimic a natural mutation that protects about 10% of northern Europeans from HIV infection. But in new research, scientists in the US found that the mutation is linked to shorter life expectancy. By the age of 74, the death rate was on average 26% higher in Britons who carried mutations in both copies of the gene, compared with those who had mutations in only one copy or neither.

• World Cup Cricket Update: PAKISTAN cricket did what Pakistan cricket does best by confounding all form and predictions to defeat tournament favourites England in a tense encounter at Trent Bridge. Sarfraz Ahmed`s team had forgotten how to win during a run of eleven consecutive defeats. But Pakistan`s experienced hands revived the team`s fortunes with an exhilarating come back that has echoes in every era of the country`s enigmatic cricket.
• Royally criticised after an embarrassing defeat to the West Indies on Friday, Pakistan vowed to persist with a positive approach.
• They stiffened their batting at Trent Bridge, recalling Shoaib Malik and Asif Ali in place of Haris Sohail and Imad Wasim. The attitude of the bowlers was exemplified by bowling coach Azhar Mahmood, who emphasised that Pakistan needed only ten good balls to bowl out England. 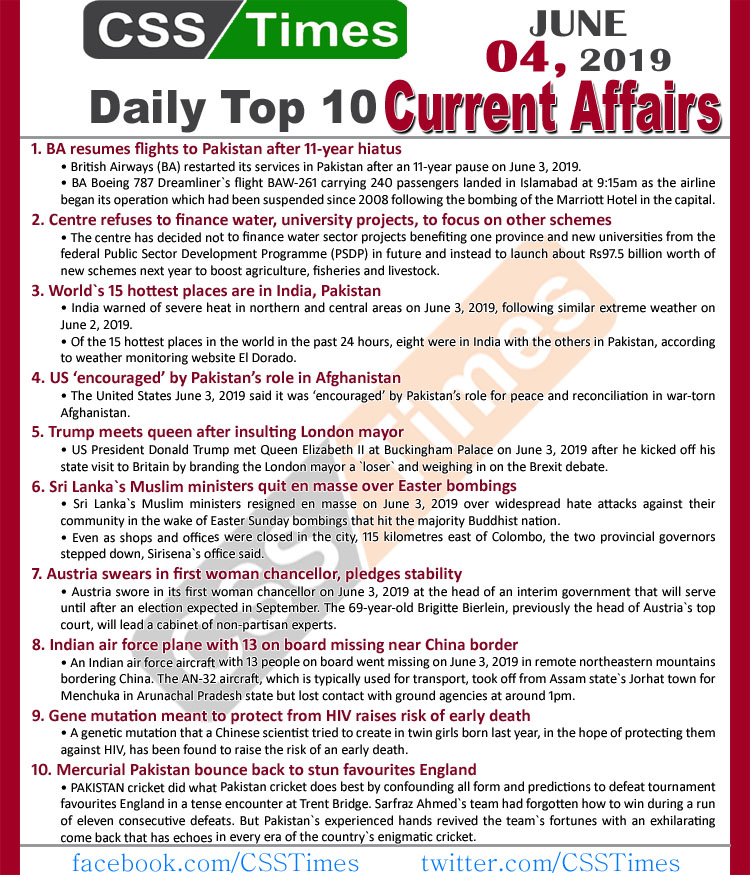