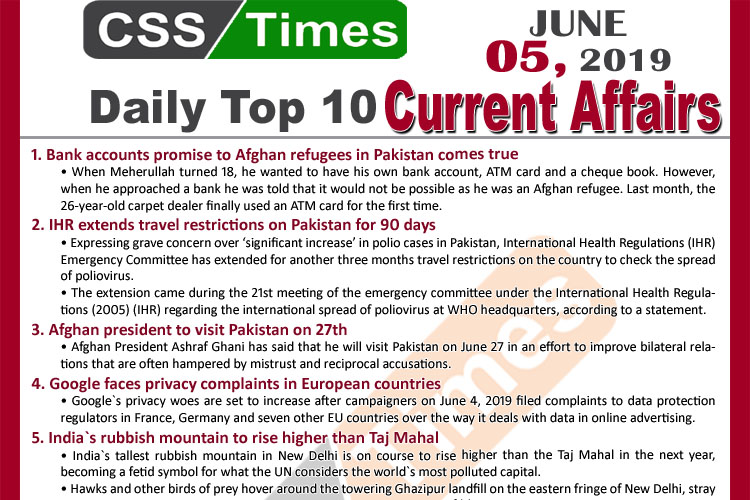 • When Meherullah turned 18, he wanted to have his own bank account, ATM card and a cheque book. However, when he approached a bank he was told that it would not be possible as he was an Afghan refugee. Last month, the 26-year-old carpet dealer finally used an ATM card for the first time.
• Like millions of Afghan refugees who have been residing in Pakistan for decades, Meherullah and his family were unable to open a bank account for years. However, back in February the federal government took some steps to change this. After reviewing progress made by different government departments to curb money laundering, Prime Minister Imran Khan tweeted that he had issued instructions that Afghan refugees who were registered could open bank accounts and participate in the formal economy of the country.

• Expressing grave concern over ‘significant increase’ in polio cases in Pakistan, International Health Regulations (IHR) Emergency Committee has extended for another three months travel restrictions on the country to check the spread of poliovirus.
• The extension came during the 21st meeting of the emergency committee under the International Health Regulations (2005) (IHR) regarding the international spread of poliovirus at WHO headquarters, according to a statement.
• The emergency committee reviewed the data on wild poliovirus (WPV1) and circulating vaccine derived polioviruses (CVDPV). The secretariat presented a report of progress for affected IHR states parties subject to temporary recommendations.
• The IHR states parties which provided an update on the current situation and the implementation of the WHO temporary recommendations since the committee last met on 19 February are Afghanistan, DR Congo, Indonesia, Nigeria, Pakistan and Somalia.

• Afghan President Ashraf Ghani has said that he will visit Pakistan on June 27 in an effort to improve bilateral relations that are often hampered by mistrust and reciprocal accusations.
• Ghani said the visit was agreed on after he met Pakistan’s Prime Minister Imran Khan last week on the sidelines of a meeting of the Organisation of Islamic Cooperation in Saudi Arabia.
• Ghani during his Eid remarks said he has accepted Pakistan Prime Minister Imran Khan’s invitation and that he will visit Islamabad on June 27.

• Google`s privacy woes are set to increase after campaigners on June 4, 2019 filed complaints to data protection regulators in France, Germany and seven other EU countries over the way it deals with data in online advertising.
• The criticism mirrored a complaint filed by privacy focused web browser Brave in Ireland and Britain which triggered an investigation by the Irish watchdog last month.
• At issue is real-time bidding, a server-to-server buying process which uses automated software to match millions of ad requests each second from online publishers with real-time bids from advertisers.
• The online ad industry, a money spinner for Google, Facebook and other online platforms and advertisers, is expected to grow to $273 billion this year according to research firm eMarketer.

• India`s tallest rubbish mountain in New Delhi is on course to rise higher than the Taj Mahal in the next year, becoming a fetid symbol for what the UN considers the world`s most polluted capital.
• Hawks and other birds of prey hover around the towering Ghazipur landfill on the eastern fringe of New Delhi, stray cows, dogs and rats wander at will over the huge expanse of smoking filth.
• Taking up the area of more than 40 football pitches, Ghazipur rises by nearly 10 metres a year with no end in sight to its foul-smelling growth.
• According to East Delhi`s superintendent engineer Arun Kumar, it is already more than 65 metres (213 feet) high.
• At its current rate of growth, it will be taller than the iconic Taj in Agra, some 73 metres high, in 2020.

• It was long the seat of Saddam Hussein`s ironfisted rule, then a sealed-off symbol of US occupation and, more recently, out-of-touch politicians.
• On June 4, 2019, Baghdad`s emblematic `Green Zone` fully reopens.
• The move is yet another signal that Iraq is getting back on its feet after decades of conflict and that its government is searching for political capital to head off summertime protests.
• The high-security zone in the centre of Baghdad had been totally inaccessible for a vast majority of Iraqis since the US-led invasion that toppled Saddam Hussein in 2003.

• Russia expressed support for Japan’s intention to play a role in helping ease tensions between Iran and the United States, an official in Tokyo said on Thursday after a meeting of Japan and Russia’s foreign and defense ministers.
• On Monday, US President Donald Trump welcomed Japanese Prime Minister Shinzo Abe’s help in dealing with Iran, after Japanese broadcaster NHK reported that Abe was considering a trip to Tehran as early as mid-June.
• “Traditionally Japan has had friendly ties with Iran,” a Japanese Foreign Ministry official told a media briefing after the meeting of the four ministers.

• Sri Lanka have beaten Afghanistan by 34 runs by the DLS method in Cardiff on June 4, 2019 to register their first points of the World Cup.
• Chasing the revised target of 187, Afghanistan lost too many wickets at regular intervals for them to ever be in the driving seat in the match. Hazratullah Zazai (30) looked good at the top of the order while there was another rearguard effort from Najibullah Zadran (43). Nuwan Pradeep was the wrecker-in-chief for Sri Lanka, his career-best ODI figures of 4/31 rocking the Afghan middle order. Lasith Malinga bowled two perfect yorkers to claim the last two wickets of the match.

• Nayyer Husnain Haider has been elected as member of Asian Football Confederation (AFC) Appeals Committee during its extraordinary congress held in Paris on June 4, 2019.
• Nayyer is first Pakistani who has been elected on this prestigious judicial body. Previously, he has been member of AFC Disciplinary and Ethics Committee. The AFC extraordinary congress was participated by AFC vice president and FIFA-recognized PFF president Makhdoom Syed Faisal Saleh Hayat along with Nayyer Husnain and member of PFF congress Arif Rahim. It was a moment of pride when Nayyer was elected as the member of the AFC appeals committee and becoming the first Pakistani of getting this honour. He also has the experience of working as member of AFC Disciplinary and Ethics Committee for two terms. Nayyer has pledged his full support for the betterment of football in Asia in general and Pakistan in particular.

• Asia`s football chief Sheikh Salman bin Ebrahim alKhalifa said on June 4, 2019 that China`s staging of the 2023 Asian Cup would serve as a `launchpad` for the country`s teams of the future.
• China was confirmed earlier on Tuesday as host at the AFC`s Extraordinary Congress in Paris after all the other countries in the running dropped their bids, giving the Chinese a possible dry-run for organising a future World Cup.
• `This is an important momentfor football in Asia and beyond, said Sheikh Salman, FIFA`s second-in-command, who was reelected to a fresh four-year term as AFC president in April.
• `Football has the chance to unlock the potential that exists in the world`s most populous country. 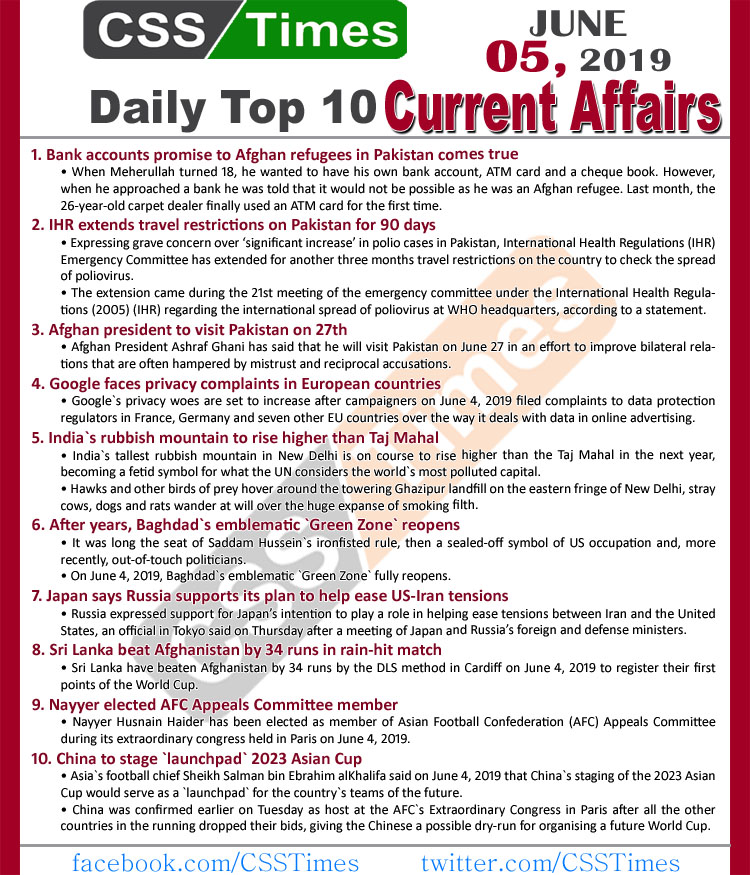