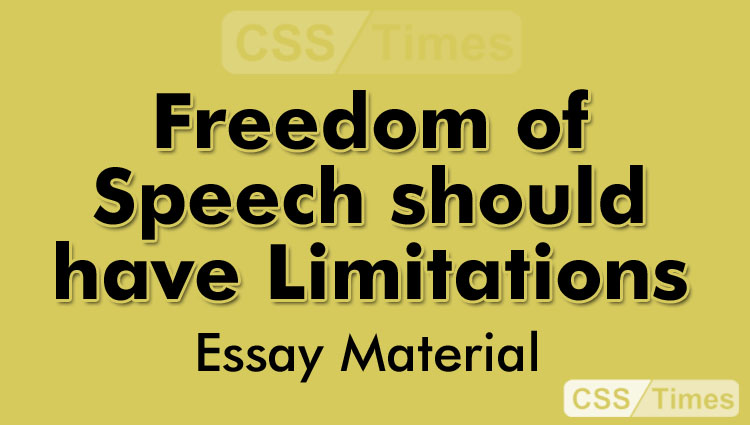 When we talk about rights and freedom, instead of going into the specified, limited, to the point reasons and responsibilities, both terms are taken into a very broader aspect which too can create, chaos, disharmony, hatred, racism and many more small but yet important issues. There is a very common and general rule of rights and freedom; “my right stops when it infringes upon your rights”. Usually both these terms are taken into one sense but when we look closely, both these terms are so way part. What is a right? A right is fair, equitable, upright, honorable, honest, moral ethical, lawful and legal well-being and practice of an individual. Whereas when you talk about freedom it represents a whole of a lot and it’s independent living.

When you are living in a free state, then you will be able to exercise your rights freely. Pakistan has been long facing! he whole freedom-right issues. We may seem a free and independent nation, but yet we do not have the liberty to exercise individual freedom. But over a decade a tremendous change has been observed in terms of being independent. Our media, once a dictated version of the government suddenly boomed. It was given a free hand. Our country saw a very new and refined media and its newly acclaimed power.

Unfortunately over the passing years, our media has grown more into competition freak and a source only for earning purposes. The presentations are not bound by the moral and ethical limits but depend entirely on speculations, assumptions, chaos, and panic and to increase viewership. Those people do not even realize that they are the representation of our country. What they show or say has a very deep and long lasting effect.

The job is not only to report, present or show but the job is that what is done should be very responsibly done. When you switch on the entertainment channels, in the name of freedom of speech we have maligned our! culture by adapting to the western inspired culture and norms. Sports channels are promoting local sports of other nations rather promoting our own sports culture. News Channels are the worst of their kind.

They have become the untouchables. Switch on any random news channel and you will get only chaotic reports. The positive element of reporting still lags behind and is nowhere to be seen. Talk shows are more of a live circus show rather being a productive show. Instead of debating on serious issues, spreading awareness and suggesting solutions, these anchors have made their shows a “ masala flick” where the participants are continuously throwing dirt on one another and clearing them from all problems. And the anchor of the show is sitting aside quiet with an evil grin on his face. They have no sympathy for the common man. Reports of tragic incidents, robbery, murder, target killings etc are reported on a m! ajor scale and yet the brighter and the positive side are kept in shadows.

I strongly believe that the freedom of media and speech in our country are being abused and hijacked by those who bear an ill will towards us. The recent tragic incident of the Bhoja Air Crash left the whole country shattered and the role of our media coverage in this manner was so horrendous and objectionable that one cannot imagine. The relatives of the deceased who are in no way to talk are being asked sick questions and were being calm down with silly talk. I have seen international reporting of various tragic incidents.

They are in no way shown as horrific and terrifying as our media shows them. Why our media is so different of any other media giant around the world? Why cannot we have some moral and ethical limits, code of conduct and regulations for our “free media” Is this freedom of speech legitimate? We as the citizens of Pakistan have a very huge responsibility towards our nation. In our own way, we should express our choices, our views! , out suggestions but should never abuse our rights. Our Media giants are doing the same thing. They have lost down so deeply in the freedom that they have forgotten their true responsibilities. All they care is for their TRP’s, their revenue, their profit and that’s it. Freedom of speech is right of every citizen but abusing this right is certainly way below morals and ethics. Media should be free but they shouldn’t be allowed to abuse their right and spread chaos and panic. It’s about time the concerned in our government should take notice of such abuses as they are promoting a negative image of our country. Freedom of speech should have limitations

Our freedom ends where others beginning. Just as you have a freedom as an ordinary citizen, so also public figures like judges, pastors, police, soldiers, teachers, senior citizens and other citizenry have rights.

Do not abuse others “Rights” in the name of Freedom of Expression. We all have a role to be civil and respectful citizens.