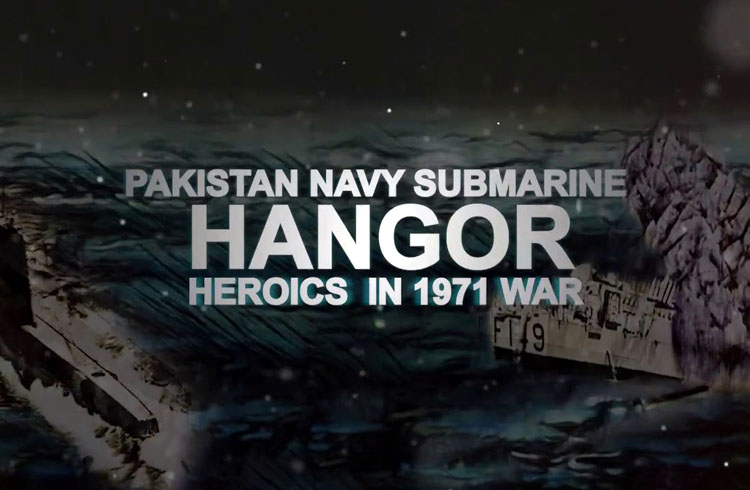 9th Dec known as Hangor Day is celebrated with fervor and zeal in order to pay tribute to the brave war veterans who struck terror in the hearts of the enemy by sinking the Indian Navy ASW Frigate INS KHUKRI and crippling INS KIRPAN during the 1971 war.

The spectacular war action took place 30 miles South East off ‘Diu Head’. The event is distinguished in naval history as being the first ever kill by a conventional submarine after World War-II. In recognition of their courage, the valiant crew of PNS/M Hangor was decorated with 04 x Sitara-e-Jurrats, 06 x Tamgha-e-Jurrats and 14 x Imtiazi Asnad.

On 9th December 1971, the UK build Indian Anti-Submarine frigate INS KHUKRI was sunk and INS KIRPAN was badly damaged by the Pakistani Submarine PNS/M Hangor. The significance of this encounter increases manifold when viewed in retrospect that it was only the first occasion after world War-II, that a War ship was sunk by a conventional S/M in a live encounter at sea. Although the sinking of Argentinean Cruiser Gen Belgrano by RN nuclear S/M HMS Conqueror in 1982 Falklands war is only the second such action/occasion in the present history; nevertheless, PNS/M Hangor till to date remains on the honour list as the only conventional submarine in the world to have achieved such a distinction.

It is important to realize that the Hangor-Khukri action did not developed overnight and the events in 1971 were shaping for such actions due to crisis in East Pakistan. Still licking the wounds of 1965 war, Indian were looking for all possibilities to take sweet revenge from their arch rival Pakistan and had decided that 1971 was their “opportunity of the century”. Due to the fragile East Pakistan situation and with the outmoded surface fleet almost neutralized by the Indian missile threat, the burden of the Pakistan Navy’s entire offensive effort hinged largely on the small and nascent submarine force.

Consequently Pakistan Navy submarine Hangor slipped in the wee hours of 22 November 1971 for a patrol off the Indian Kathiawar coast under the command of Commander Ahmad Tasnim SJ. It is important to note that on the same day, the Indian Army had launched a large scale invasion off East Pakistan with an aim to heave the nation into a full scale war within a fortnight. Nevertheless, the submarine commander and her crew were unaware of this development and proceeded towards the allocated area for a reconnaissance patrol.

PNS/M Hangor reached its patrol area after successfully completing the difficult transit under the heavy enemy air activity and commenced her patrol. Until 2 December, Hangor operated in various areas, as ordered by Naval Headquarters with no joy.

However, on 2 December Hangor’S sensors picked up number of radar transmissions from the direction of Bombay harbour. These emissions were analyzed and assessed to be of Indian warships. The Hangor Ops team correctly appreciated that such transmission were indicative of the presaged imminent sailing out of the Indian Western Fleet. A quick sweep by her radar at periscope depth revealed that the formation consisted of 6 escorts screening a main body of four ships and was undoubtedly the Indian Western Fleet comprising of the cruiser INS Mysore with supporting auxiliaries and her escorts, which had sailed from Bombay on 2 December.

At this time, though an all-out war was raging in East Pakistan, hostilities had not yet broken out in the West. Therefore, Hangor could not attack these ships as she did not had the orders to do so and only learnt about the outbreak of hostilities through C-in-C’s message on the submarine broadcast on the morning of 4th December. The valiant Hangorians rightly felt aggrieved and frustrated to have missed their prey by such a narrow margin. Nevertheless, Hangor’s endeavours were not entirely in vain and the location of the Indian Fleet at this crucial time was by itself a significant accomplishment. Furthermore, the mere presence of Hangor in Indian waters made the enemy fearful of possible submarine attack and consequently the Indian Fleet split-up and moved so far south that it was no longer in a position to execute its envisaged attack plans. It is important to note that, it was due to Hangor’S presence that Indian Navy cancelled their scheduled missile attack on Karachi harbour on the night of 5th December.

PNS/M Hangor continued her patrol and in an effort to locate the evasive enemy, she extended her patrol northwards to investigate some intercepted radio transmissions. Consequently, when she was off the Kathiawar coast in the early hours of 9 December; two contacts were picked up on her passive sonar on a north-easterly bearing. They were identified as warships by their sonar transmissions and were at a radar range of 6 to 8 miles. The two contacts were appreciated to be two anti-submarine frigates engaged in SAU (Search and Attack Unit) operations doing a rectangular anti-submarine search and thus a pursuit of the enemy began.

By 091900 December Hangor was waiting on the estimated track of the targets and “Action Stations” was therefore sounded at 1915 meaning that the “shark” had bared its teeth and its moment of reality had arrived. Although the enemy was operating sonar, Hangor was not detected and therefore still enjoyed the element of surprise. The conditions were not favourable for conducive submarine operations due to shallow depth (60-65 meters) in the area and the enemy surface fleet was in advantageous position due to limited maneuverability of S/M in the vertical plane to avoid enemy’s depth charges, if required.

Nevertheless, Hangor continued her approach and after obtaining a good firing solution; she commenced the attack at 1957 by firing one homing torpedo, “down the throat” at the more northerly target INS Kirpan. The torpedo ran and was tracked on sonar all the way until it acquired “lock on” to the target and passed under it (as it was supposed to do). However, the newly acquired torpedoes, whose test facilities had not yet been set up, failed to explode and kept going. The element of surprise was lost and the moment the torpedo passed under INS Kirpan, she suddenly woke up realizing that she was under attack and turned away at maximum speed.

The advantage had now shifted completely in favour of the enemy and INS Khukri (the southerly contact) homed onto the known direction of torpedo launch position. The Hangor crew kept their cool and calmly shifted target to KHUKRI, obtained a quick solution and fired the second torpedo at it. This quick shot was an urgent attack with an aim to spoil the attack by KHUKRI; however, loss of nerve by KHUKRI’S Commanding Officer on hearing the oncoming torpedo made him to turn away from the incoming torpedo; a grave mistake which proved fatal. The torpedo achieved “lock on” and went straight for the target, passed under it and exploded under the keel thus breaking the keel of INS KHUKRI which sank in a matter of two minutes, with all hands on board. It is important to note that the torpedo hit was so precise that neither there were any survivors nor there was any time for the myth of the “CO nonchalantly lighting a cigarette as the ship sank under him” to be enacted.

Meanwhile, INS KIRPAN came charging in and fired off a pattern of depth charges with a hope to scare Hangor away into breaking off its attack. However, the Hangorians were not intimidated and instead prepared a third torpedo firing solution for INS KIRPAN; which ultimately hit her and rendered her badly damaged and non-ops. In this spectacular action which took place about 30 miles south of Diu off the Indian Kathiawar coast, INS KHUKRI was sunk within two minutes after receiving a hit. 18 officers and 176 sailors including the Commanding Officer lost their lives. This came as a shattering blow to the Indian Navy, deflating in one stroke the exuberance generated by highly embroidered success stories of the missile attacks at PN ships off Karachi.

It is important to realize that the action had not yet finished and brave Hangor action was followed by a massive anti-submarine effort by the Indian Navy, in the form of Operation Falcon to hunt down and kill just one submarine, PNS/M Hangor. The operation was launched on the night of 9 December and continued for four days till the night of 13 December. During these four days, the Indian Navy utilized all available anti-submarine ships, shore-based surveillance aircraft, Alize (Specialized anti-submarine naval aircraft) and Sea King anti-submarine helicopters in HUK Groups (Hunter-Killer Groups) and combed an area extending from the point southwest of Diu Head, where KHUKRI was sunk, right upto a point just short of PAF’s air-strike range from Karachi. It is important to understand that in retrospect a submarine evasion after an attack is more challenging and complicated than the attack itself due to various inherent conventional submarine limitations, predominantly of which is the submerged endurance. Nevertheless, the valiant Hangor crew remained steadfast during these four intense days, survived/detected 36 salvoes of depth charges and reached Karachi against all odds on 18th December.

The significance of Hangor action was manifold. It not only demonstrated Pakistan Navy’s tactical superiority in subsurface warfare but the strategic impact was even more significant as the Indian Navy cancelled “Operation Triumph”, the third missile attack, which was to be launched on 10 December. Furthermore, the involvement of the Western Fleet for four days in the hunt for the Hangor took the pressure off our coast and the morale of nation and our officers and men soared high. In recognition of their courage, the valiant crew of Hangor was decorated with 04 x Sitara-e-Jurrats, 06 x Tamgha-e-Jurrats and 14 x ImtiaziAsnad. Every year 9th December is celebrated with an aim to pay tribute/homage to the valiant crew of Hangor besides renewing Submarine squadron vows/commitments to defend the nation and country till the last drop of their blood.