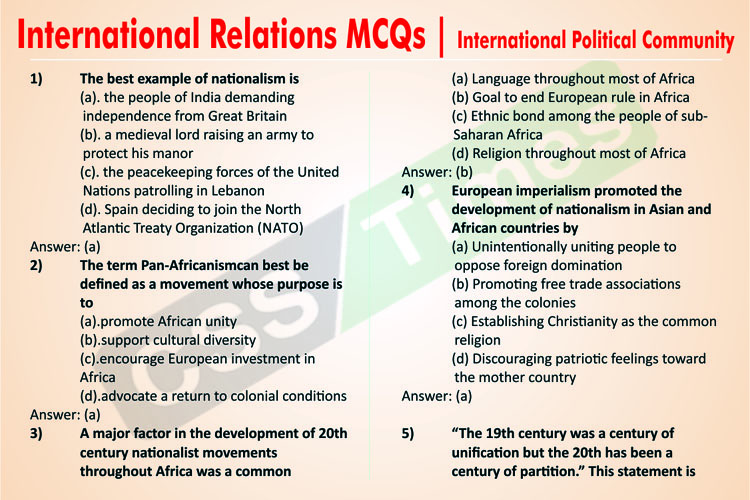 1) The best example of nationalism is
(a). the people of India demanding independence from Great Britain
(b). a medieval lord raising an army to protect his manor
(c). the peacekeeping forces of the United Nations patrolling in Lebanon
(d). Spain deciding to join the North Atlantic Treaty Organization (NATO)
Answer: (a)

2) The term Pan-Africanismcan best be defined as a movement whose purpose is to
(a).promote African unity
(b).support cultural diversity
(c).encourage European investment in Africa
(d).advocate a return to colonial conditions
Answer: (a)

4) European imperialism promoted the development of nationalism in Asian and African countries by
(a) Unintentionally uniting people to oppose foreign domination
(b) Promoting free trade associations among the colonies
(c) Establishing Christianity as the common religion
(d) Discouraging patriotic feelings toward the mother country
Answer: (a)

5) “The 19th century was a century of unification but the 20th has been a century of partition.” This statement is best supported by the history of which nation?
(a) Italy
(b) Germany
(c) Spain
(d) Mexico
Answer: (b)

8) Giuseppe Garibaldi, Thomas Jefferson, and Simón Bolívar were similar in that each
(a) Encouraged a spirit of nationalism in their people
(b) Denied voting rights to the citizens after gaining control of their nation
(c) Opposed the territorial expansion of the United States
(d) Followed the ideas of Marx in establishing a government
Answer: (a)

9) Which was a major reason for the creation of the separate nations of India and Pakistan in 1947?
(a) India was economically dependent on Great Britain, while Pakistan was economically self-sufficient.
(b) The two nations favored vastly different forms of government.
(c) The religious and cultural patterns of the two areas were in serious conflict.
(d) Natural geographic features of the Indian subcontinent divided the two areas
Answer: (c)

11) In Africa, a major result of World War II was
(a) An increase in feelings of nationalism
(b) A general decline in the standard of living
(c) An increase in colonization by European nations
(d) A rapid decline in population
Answer: (a)

12) Who was Frederic sorrieu?
(a) A Philosopher
(b) A Painter
(c) A Politician
(d) A Revolutionaries
Answer: (b)

13) Which of the following is true with reference to Romanticism?
(a) Concept of government by consent
(b)Freedom for the individual
(c) Cultural movement
(d) Freedom of markets
Answer: (c)

14) What was the basic philosophy of the conservatives?
(a) They opposed monarchial forms.
(b) They were the supporters of democracy
(c) They wanted to glorify folk art and vernacular language.
(d) They stressed the importance of tradition and established institutions and customs.
Answer: (d)

15) Who was count Cavour?
(a) The chief Minister of Italy
(b) Revolutionary of Germany
(c) A catholic missionary
(d) The chancellor of Germany
Answer: (a)

16) Which of the following state lead the unification of Germany?
(a) Bavaria
(b) Prussia
(c) Rhineland
(d) Hanover
Answer: (b)

18) What was this main objective of the treaty of Vienna of 1815?
(a) Toundo the changes brought about in Europe during Napoleonic war.
(b) To plan the unification of Germany
(c) To restore the democracy in Europe.
(d) To overthrow the Bourbon dynasty
Answer: (a)

19) Which of the following treaty recognized Greece as an independent nation?
(a) Treaty of Versailles
(b) Treaty of Constantinople
(c) Treaty of Frankfurt
(d) Treaty of Vienna
Answer: (b)

22) The most common route for investments by MNCs in countries around the world is to:
(a) Set up new factories
(b) Buy existing local companies
(c) Form partnerships with local companies
(d) Both (a) and (b)
Answer: (c)

23) Globalisation has led to higher standards of living of:
(a) Well-off consumers
(b) Poor consumers
(c) Big producers
(d) Small producers
Answer: (a)

24) A company that owns or controls production in more than one nation is called:
(a) Multinational corporation
(b) Joint stock company
(c) Global company
(d) None of these
Answer: (a)

25) Where do MNCs choose to set up production?
(a) Cheap goods
(b) Cheap labor resources
(c) Economic sustainability
(d) None of these
Answer: (b)

28) One major factor that has stimulated the globalisation process is:
(a) Effective utilization of resources
(b) Increase in income and wealth
(c) Willingness to cooperate
(d) Rapid improvement in technology
Answer: (d)

30) Which out of the following is an example of a trade barrier?
(a) Foreign investment
(b) Delay or damage of goods
(c) Tax on imports
(d) None of these
Answer: (c)

31) Removing barriers or restrictions set by the government is called:
(a) Liberalization
(b) Investment
(c) Favorable trade
(d) Free trade
Answer: (a)

32) WTO aims at:
(a) Establishing rules for domestic trade
(b) Restricting trade practices
(c) Liberalizing international trade
(d) None of these
Answer: (c)

33) Globalisation has created new opportunities of:
(a) Employment
(b) Emerging multinationals
(c) Providing services
(d) All of the above
Answer: (d)

34) One major government initiative to attract foreign companies to invest in India is:
(a) To raise the standard of education
(b) To promote unemployment in the public sector
(c) To build special economic zones
(d) Both (a) and (c)
Answer: (c)

35) Globalisation has posed major challenges for:
(a) Big producers
(b) Small producers
(c) Rural poor
(d) None of these
Answer: (b)

36) With the growing competition, most employers these days prefer to employ workers:
(a) Flexibly
(b) Quickly
(c) Selectively
(d) None of these
Answer: (a)

37) Globalisation opportunities for paid work for women has denied them:
(a) Good health
(b) Good education
(c) Permanent job
(d) None of these
Answer: (c)

38) Fair globalisation would mean:
(a) Fair opportunities for all
(b) Fair benefits for all
(c) More support to small producers
(d) All of the above
Answer: (d)

40) The filter-down of manufacturing industry and services from developed countries to NICs and developing countries is termed:
(a) World shift
(b) Global shift
(c) Global change
(d) World change
Answer: (b)

41) An economy that grows very rapidly is often referred to as a:
(a) Lion economy
(b) Cheetah economy
(c) Puma economy
(d) Tiger economy
Answer: (d)

45) Which of the following defines globalization?
(a) Tendencies to a worldwide reach, impact, or connectedness of social phenomena
(b) A world-encompassing awareness among social actors
(c) World-wide access to markets, cheap labor and cheap costs of production
(d) Both a and b
Answer: (d)

46) Which of the following is also known as International Bank for Reconstruction and Development?
(a) IMF
(b) RBI
(c) WTO
(d) World Bank
Answer: (d)

48) __________ means integrating the domestic economy with the world economy.
(a) Globalisation.
(b) Privatization.
(c) Liberalization.
(d) Disinvestment.
Answer: (a)