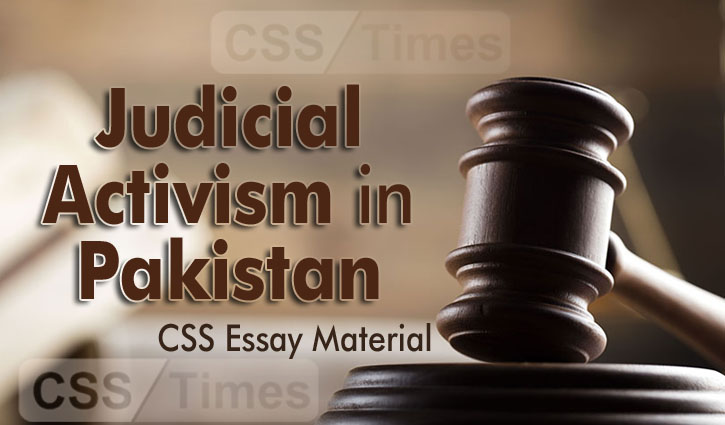 Certain legal circles are showing concerns over the proactive role our judiciary is playing in restoring fundamental rights to the common man, and taking cognizance of corrupt practices in institutions of public importance. This proactive role which is termed as judicial activism has been defined in Black’s Law Dictionary as, “a philosophy of law-making whereby judges allow their personal views about public policy, among other factors, to guide their decisions.” Thus according to them any order or decision which is coloured by a judge’s subjective mind rather than the literal application of law would amount to a legal aberration and is therefore likely to cause miscarriage of justice. But the fact remains that when a judge is engaged in the task of sifting truth from falsehood, his objective and subjective faculties are simultaneously at work, and in respect of most of the questions before him, the bare literal application of law would neither be adequate nor desirable.

Judicial activism is not a new phenomenon; it has grown over time with the failure of the executive to fully cope with the aspirations of the people becoming increasingly conscious of their rights in a fast changing world. The earliest seeds of its growth can be found about two hundred years ago, when Justice Marshall of the United States decided the celebrated case of Marbury vs Madison.

Judiciary began to be active in Pakistan from mid 80’s onward, when Gen Zia lifted the Martial Law, restored the 1973 constitution by making the Objective Resolution (Art. 2-A) as substantive part of the constitution. This introduction, later indirectly closed the doors of the traditional legal system. Even the courts could take suo moto notice or any person could file a petition to draw the attention of the court about infringement of any of the fundamental rights. Public Interest litigation (PIL) became common, and relief to the public was given by freely invoking the Fundamental Rights enshrined in the constitution. Thus it became common that the proceedings initiated through suo moto powers for the violations of fundamental rights used to be converted into a petition under Art 184-(3). Thus the period from 1990 to 1995 was the golden period of development of PIL. But this suo moto jurisdiction of the courts was regarded by some legal circles as too arbitrary since it freed the courts from all procedures and precedents.

Similarly the suo moto cases regarding the random crimes of heinous nature, deaths by kite-strings, cases of bonded labour, inhuman treatment in jails, NICL scam, Hajj corruption, Ephedrine scam, cases of missing persons, and rulings on scores of other public issues were widely welcomed by the public already wary of bad governance of the present rulers. One major benefit of judicial activism was that it gave relief to millions of poor and helpless people who were unable to knock the doors of the courts for relief.

Much has been said against judicial activism. It has been said that it purports to upset the delicate balance of powers between the three organs of the state as defined by the constitution. These are certainly matters which need serious consideration. Unless pro-active role of judiciary is balanced by a cautious self-restraint and is judiciously and sparingly exercised in very genuine cases, it is likely to degenerate into arbitrariness. It has been rightly said that judicial activism is a double-edged sword; the line between its use and abuse must remain as wide as possible. In societies which are plagued by rank corruption, bad governance and criminal apathy of its rulers, the judiciary, if it is alive to the hardship of the public, automatically fills the gap, by taking the front seat and steering the nation to health and safety.

With the advent of this post conservative trend a school of thought has emerged that opposes this development. They warn against greater judicial activism and by extension suo motu exercise of judicial power. They highlight the jurisprudence of the last five decades.

Secondly, they are argue that the High Courts, by taking suo motu notice, are discouraging people from following the due process of the law i.e. the right of an aggrieved person to move the Court when his/her right is being infringed/violated.

Thirdly, cases that are already pending before the courts are delayed even further. As of 30th June 2010 there are nearly 1.65 million cases pending in the Courts in Pakistan, out of which more than 85,000 are before the High Courts. While the High Courts take suo motu notice of issues in the news, these cases are reprioritized]. Why would one – as a litigant – want to spend long and arduous years in courts following the procedure prescribed by law?

Fourthly, if the justification for suo motu action is “justice delayed is justice denied”, do those litigants whose cases are already pending before the High Court not have the same right

Then there is the question of practicality. It is simply not possible for the High Court to take suo motu notice of every indiscretion of the executive. Therefore the High Court is – in effect – choosing which matters to take notice of and which not. What is, in that case, the criterion for such a selection? What of those citizens whose plight is not taken up by the High Court?

Finally they argue that how can an unrepresentative and unaccountable body or person decide on policy matters that should be the exclusive purview of the elected officials? Clearly it is an inherent contradiction to the concept democracy that policy is determined by the judiciary.

In this regard the example of the suo motu notice taken by Lahore High Court’s Divisional Bench of the high price of sugar may be mentioned. The Court ordered the price of sugar to be fixed at Rs. 40 per Kg. This level of micro-management of public policy is quite alarming. The outcome has been that neither the price has been fully stabilized nor fully floated, as there is constant risk of artificial interference. Wouldn’t a long-term solution aimed against hoarders, by enforcement and strengthening of anti-trust and anti-monopoly laws be more effective?

Therefore it may be concluded that notwithstanding the nobility of the objective, it is simply not possible for a Court of Law to ensure effective running of each and every department of the government. Even with its widening sphere of influence – which is a reality – the judiciary must not overwhelm itself by this ever greater public expectation and not let itself get embroiled in micro-managing the affairs of the executive, or for that matter, the legislative. If the judiciary decides on policy matters such as the price of sugar or carbon levy, it should then expect to share the responsibility should things don’t go according to plan.

The judiciary cannot endeavor to cause a reformation of the society. It is not its role and for this reason that the Supreme Court, in the recent judgment on the National Reconciliation Ordinance observed that “… if the Court attempts to become the arbiter of what is good or bad for the people, it will inevitably enter the minefield doctrines such as the ‘law of necessity’ or salus populi suprema lex.”

While one cannot categorically state that there has been greater vigilance on the part of the executive, or that there will be any lasting effect of the suo motu use of judicial power, as only time will tell. The judiciary however needs to recognize its own limits and strike a balance. No rule ought to be laid down as to whether or when or to what extent judicial power may be exercised suo motu. It is my opinion that neither should there be an absolute bar, nor should it be unbridled authority and it is for the High Court for itself to recognize and lay down its own limitations.