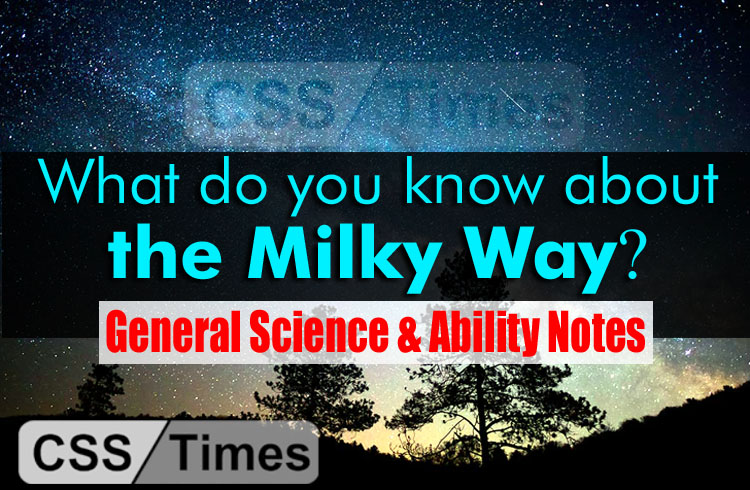 The Milky Way, or simply the Galaxy, is the galaxy in which the Solar System is located. It is a barred spiral galaxy that is part of the Local Group of galaxies. It is one of billions of galaxies in the observable universe The Milky Way contains at least 100 billion stars and may have up to 400 billion stars. All the objects in the Milky Way Galaxy orbit their common center of mass, called the Galactic Center

Features of the Milky Galaxy

2. The Milky Way also contains two significant minor arms, as well as two smaller spurs. One of the spurs, known as the Orion Arm, contains the sun and the solar system. The Orion arm is located between two major arms, Perseus and Sagittarius.

3. The solar system lies about 30,000 light-years from the galactic center, and about 20 light-years above the plane of the galaxy.

4. The Milky Way contains over 200 billion stars, and enough dust and gas to make billions more.

5. At the center of the galaxy is the galactic bulge. The heart of the Milky Way is crammed full of gas, dust, and stars.

6. More than half the stars found in the Milky Way are older than the 4.5 billion year old sun.

7. The most common stars in the galaxy are red dwarfs, a cool star about a tenth the mass of the sun.

8. As late as the 1920s, astronomers thought all of the stars in the universe were contained inside of the Milky Way. It wasn’t until Edwin Hubble discovered a special star known as a Cepheid variable, which allowed him to precisely measure distances, that astronomers realized that the fuzzy patches once classified as nebula were actually separate galaxies.

Future of the Universe:

Astronomers recognize four models of possible futures for the Universe.

☄ Closed Model: According to the closed model theory, many billions of years from now, expansion will slow, stop and the Universe will contract back in upon itself.

☄ Flat Model: In the flat model, the Universe will not collapse upon itself, but expansion will slow and the immense will approach a stable size.

☄ Open Model: According to the open model, the Universe will continue expanding forever.

☄ Cyclic Model: Cyclic model states that Universe will collapse, then there will be a Big-Bang again, it will expand first and will collapse again. This cycle will go on.