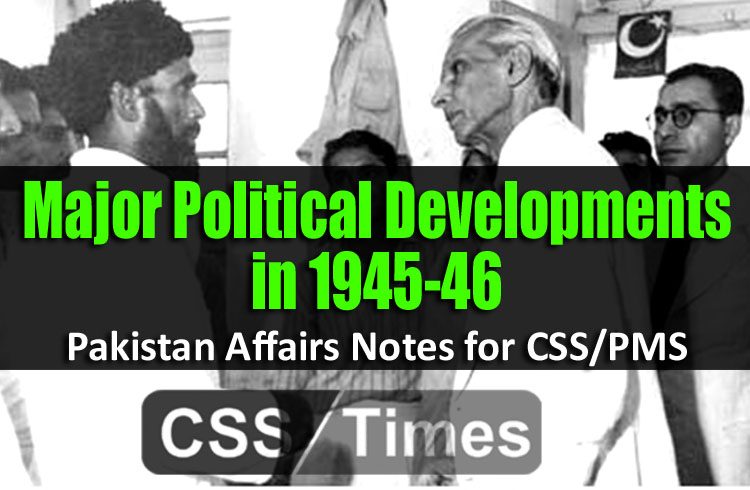 During the World War ll, the British sought Indian military cooperation and offered political and constitutional changes after the war. They desired to expand the Viceroy’s Executive Council.

Lord Wavell arranged Simla Conference during June-July 1945 in which all the political parties participated by sending their representatives. Jinnah and Abul Kalam Azad represented the Muslim League (ML) and the Congress respectively. Maulana Azad claimed Congress as sole representative party of all the peoples living in India. Jinnah considered the ML the only political party of the Indian Muslims and on this the ML had right to appoint Muslim members to the Council. This issue could not be dissolved and the differences between the ML and the Congress increased.

1. Self government with the cooperation of Indian leaders.
2. New Elections in the winter.
3. Provincial governments in the provinces
4. Constitutional Assembly to be convened. The basis of constitution making was to be settled.
5. Executive Council to be set up. It will have representation of major parties.

The ML’s stand was very clear i.e. the ML is a sole representative of Muslims and Pakistan is its ultimate goal. The ML launched the massive campaign for these destinations. The Islamic slogans became massively popular. In this way, the struggle for the establishment of Pakistan was motivated on the basis of Islam. The role of students was also prominent during the political drive. On the other hand, the Congress put the slogan of independence from British in the shape of undivided India before the Hindu nation. They proclaimed that their stand was for all the Indian communities.

The ML also showed an impressive performance in the Muslim minority provinces. The ML formed its ministry in Sind, Khudai Khidmatgar (Dr. Khan) in NWFP, coalition government by ML in Bengal, and Unionist (20), Akalis and the Congress in Punjab (Khizr Hayat Tiwana).

The British Labour government sent a mission to formulate some acceptable constitutional settlement. Sir Pethick Lawrence, Stafford Cripps and A. V. Alexander deliberated with the governors, members of the Executive Council and then the Indian political leaders on different proposals. Maulana Azad as the president of the Congress stressed to establish federal government and Jinnah repeated the Two Nation Theory as a universal reality. On April 19, 1946, all the newly elected Muslim members pledged in the Delhi Convention to shatter the Hindu dream of united India. In the second Simla Conference (May 15, 1946) the ML wished two legislative assemblies while anti-ML political parties favoured strong centre.

Recommendations of the Cabinet Mission: May 1946

1. Centre to deal with foreign affairs, defence, communication, taxation.
2. Rest of the subjects with provinces.
3. There will be a legislature and executive comprising representatives of provinces and states.
4. No legislation on communal affairs if the majority of the two communities are not present and voting in favour.
5. Provinces will be divided into three groups:
A: Hindu majority provinces e.g. UP, CP, Madras, Bombay, Bihar, Orissa.
B: Muslim majority provinces in NW e.g. Punjab, NWFP, Balochistan and Sindh. C: Bengal and Assam.
6. Each group could decide what to be managed jointly and what should be managed by provinces themselves. They could decide if the group desired to frame constitution.
7. After ten years, a province by a vote of its legislature could ask for review of relationship with the Union. It implied that a group or province could quit the Indian Union.
8. CA to be elected by the elected members of the provincial assemblies. Seats to be divided into three categories: General, Muslim, and Sikh on the basis of population in provinces.
Separate Electorate.
9. Interim Government to be set up.

The Muslim League reiterated its demand for Pakistan. It accepted the plan for two reasons: Basis and foundation of Pakistan was in the compulsory grouping and the right to ask for review.

The Congress was critical of groupings and right to ask for review of constitutional relationship. It agreed to contest elections for the CA but declined to be bound by the proposals of the Cabinet Plan. The nonsensical stand of the Congress was that they were ‘free to make any change in the proposal.’ Definitely the ML was alarmed by the Congress’ intentions.

The ML’s timely coercive political strategy brought the Congress on table with the British. The Interim Government was formed under Nehru on September 2, 1946 and the ML stayed away. They joined it on October 25, 1946:
• Liaquat Ali Khan
• Sardar Abdur-Rab Nishtar
• Raja Gazanfar Ali
• Chundrigar
• J. N. Mandal
There were a number of problems of smooth functioning of the Interim Government due to the Muslim-Hindu differences.

CA (Constituent Assembly) was elected by the provincial assemblies in July 1946. ML won all Muslim seats except 5 while the Congress won all general seats except 9. The first session was held on December 9, 1946 and the ML boycotted it because the Congress wanted to frame the Constitution for United India. The ML demanded two constituent assemblies and showed its firmness on the demand for Pakistan. By the end of 1946, it had become clear that a constitution for united India could not be forced.
The Cabinet Mission Plan offered a possibility of a loose federation with an option to the Muslims to separate after ten years.