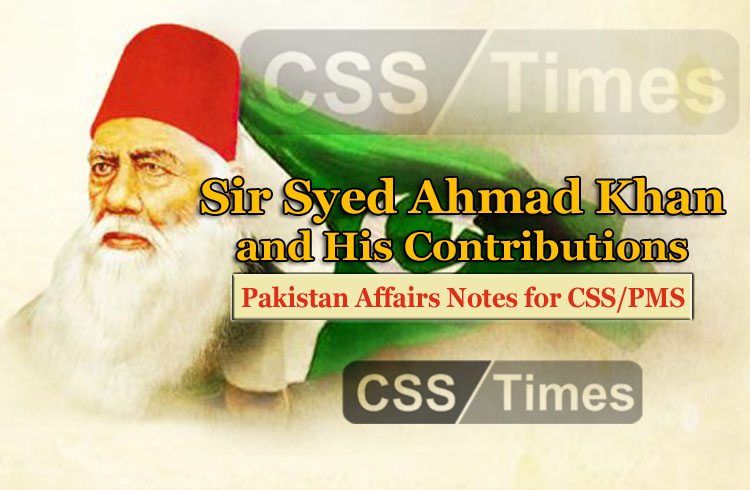 The great emancipator of the Indian Muslims Sir Syed Ahmad Khan was born at Delhi in 1817. This is the period when the great Mughal Empire was close to a complete collapse. Sir Syed’s family had already joined the East India Company and his maternal grandfather served in Iran and Burma under the British government. Sir Syed got interest in English from his maternal family. SM Ikram writes, “For this insight into the affairs of the state and first contacts with Western learning and civilization he was indebted to his maternal grandfather…” (S. M. Ikram, Modern Muslim India, p.18). Sir Syed was very healthy by birth and his grandfather remarked: “A Jat has been born in our family.” (Ibid., p. 19) The death of Sir Syed forced him to join the British as head clerk in 1839. The death of his brother made him serious and energetic to face the neuroses of life courageously. Another event that changed him entirely was the War of Independence in 1857. In 1841, he passed examination and became sub-judge. At the eve of the War of Independence he was performing the duties as sub-judge in Bijnore. He established educational institutions and after coming at Aligarh he rejuvenated his aspirations to work for the depressed Muslims of the Subcontinent. He devoted his entire life for this purpose to bring the Muslims close to the British. He died on March 27, 1898 and was buried in Aligarh.

He took responsibility of the Indian Muslims when they had been thrown in backwardness, depression andn humiliation. The British held them criminal of the War while the Hindus had won the British being anti-Muslim force. In such environment, Sir Syed guided his community to rejoin the life. To Dr Qalb-i-Abid, “Sir Syed Ahmad Khan was among a very few leaders produced by Muslim India, who like Mohammad Ali Jinnah made a tremendous contribution in guiding the destinies of the Indian Muslims.” (Dr Q. Abid, Muslim Struggle for Independence, p. 11.)

In the political arena, Sir Syed carved numerous successes; he eradicated misunderstandings between the Muslims and the British infused due to the past particular incidents. Awakening among the Muslims about the political ups and downs and co-existence in the presence of other nations in India was another contribution of Sir Syed. He motivated the Muslims to absorb the modern education of the West because this was the very motive of the Western expansion in the world. He visualized the bright future of the Muslims if they engaged themselves in the Western learning.

Sir Syed won the British confidence and cordial relationship by saving their lives during the War of Independence. He utilized this relationship for the betterment of the Muslims. It was a subtle situation because the government had put the War crimes on the Muslim shoulders and assaulted their every aspect of life: “These events were a trauma for the Muslims; …the methods used by them shocked the civilized world. The detestation of Delhi as a centre of Muslim culture was horrendous; Bahadur Shah Zafar…was exiled to Rangoon; Lt. Hodson shot three Mughal princes and later 24 princes were tried and executed; a vast ocean of blood there was; Some Muslims were shot dead and their dead bodies were thrown into the river Jamna…” (Ibid., p. 14). All Muslims were ousted from land, property and employments that made them third class citizens of India. This created revengeful sentiments among the Muslims who detested British, their culture and civilization. Sir Syed was of the view that British were a civilized, educated, wise and disciplined nation and occupied India with the new war strategy and munitions that could not be matched by the locals and particularly by the Muslims. Therefore at the juncture the Muslims should mould themselves according to the pace of time to avoid more disaster.

Sir Syed published Loyal Mohammedans of India and Risala Asbab-i-Baghawat-i-Hind that helped both the nations to redress their grievances. In 1885 the Indian National Congress was founded but Sir Syed warned the Muslims from the sinister aspirations of the Hindus. Another factor was that he intended the Muslims to abstain from the politics that could result in friction with the ruling nation.

Urdu grew as common language of all the Indians regardless of origin or religion but in 1867 the Benarsi Hindus started campaign to replace Urdu by Hindi. To gain the objectives, they declared numerous organizations, which discouraged Sir Syed who said to Shakespeare that since now both the nations could not live together. Later the followers of Sir Syed tried their level best to save Urdu language. Mohsin ul Mulk was the outstanding person who organized the Muslims in defense of Urdu.

Sir Syed used the word ‘nation’ for the Muslims. Some writers criticize that he declared Hindus and Muslims one nation. But as a matter of fact, he advocated the Hindu-Muslim unity that meant ‘the working relationship’ between the two nations as once he said: “Hindus and Muslims should try to be of one mind in matters which affected their progress.” He favored separate electorate for the Muslims in 1883 saying that the majority would override the interests of the minority. (P. Hardy, pp. 136-37)

In 1888, he set up the Patriotic Association to meet the propaganda of the Congress. Muslims and Hindus joined the Association. It advocated the Muslims’ emotions.

In December 1893, Sir Syed founded the Association. Its main purpose was to protect the political, religious and social rights of the Muslims.

Sir Syed was great because he contributed greatly to the Muslim struggle for identity. Otto von Bismarck served the German nation with the help of all government sources but Sir Syed did the same without all this. To Khalid Bin Sayeed, “Many tributes have been paid to Sir Sayyed, particularly by modern educated Muslims for being daring enough to put forward such views in an age which was by no means liberal or tolerant.” (Dr Khalid Bin Sayeed, Pakistan, the Formative Phase, p. 17).