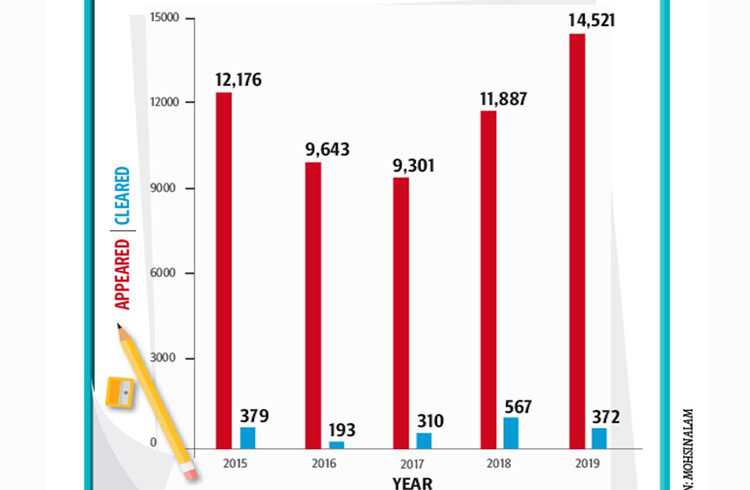 The alarming outcome of this year’s Central Superior Services (CSS) exam sent shockwaves through the country’s community of young professionals and left many wondering what went wrong. Less than three per cent of those who appeared for the competitive exam was able to clear it, according to results put up by the Federal Public Service Commission (FPSC) more than a week ago.

But this year’s outcome is far from an anomaly when taking into account previous years’ results. Data obtained from the FPSC by The Express Tribune reveals past years’ CSS success rates have been more or less within the same range, raising questions regarding the efficacy of both the assessment process and the country’s education standards.

Of the 43,097 candidates who have appeared for the competitive exam over the past four years, only 1,444 or a meager 3.35 per cent managed to pass it, according to the FPSC data. In contrast, this year’s CSS success rate was only slightly less at 2.56 per cent.

Even with such low chances of success, passing the CSS exam is far from a guarantee that a candidate will be admitted into government service it appears. Of the 1,444 who cleared the assessment process, only 973 were placed in different services groups, the FPSC data showed.

Speaking to The Express Tribune, bureaucrat and CSS expert Mureed Hussain Jasra, who also runs a CSS exam training centre, pointed out some of the factors behind such dismal outcomes year on year. The main reason, according to him, was the ‘non-seriousness’ of CSS applicants.

“This is evident from the thousands who do not even bother to appear for the exam after applying for it,” he said. According to data released by the FPSC along with the results, as many as 23,403 candidates applied for this year’s CSS exam but only 14,521 of them appeared for the written part of it.

Another reason Jasra pointed out was the lack of a uniform education system that was current with the times. “At present, across Pakistan, we have various different standards of education that are by and large segregated along class lines. As a result, many candidates, particularly those from less well-off backgrounds, have studied in an outdated education system,” he said.

The CSS expert did not pin all the blame on the candidates, however. He said there are serious issues with the CSS curriculum and FPSC examiners who check the papers at present. “Take for example the English part of the exam. Candidates are asked to write essays on complex topics like philosophy, due to which many fail despite excellent language skills,” he told The Express Tribune. More than 70 per cent of candidates fail the English section each year, according to FPSC data.

“Although the CSS syllabus was modified in 2016 with the inclusion of new essay questions and a new marking scheme, these changes are not enough,” Jasra added. 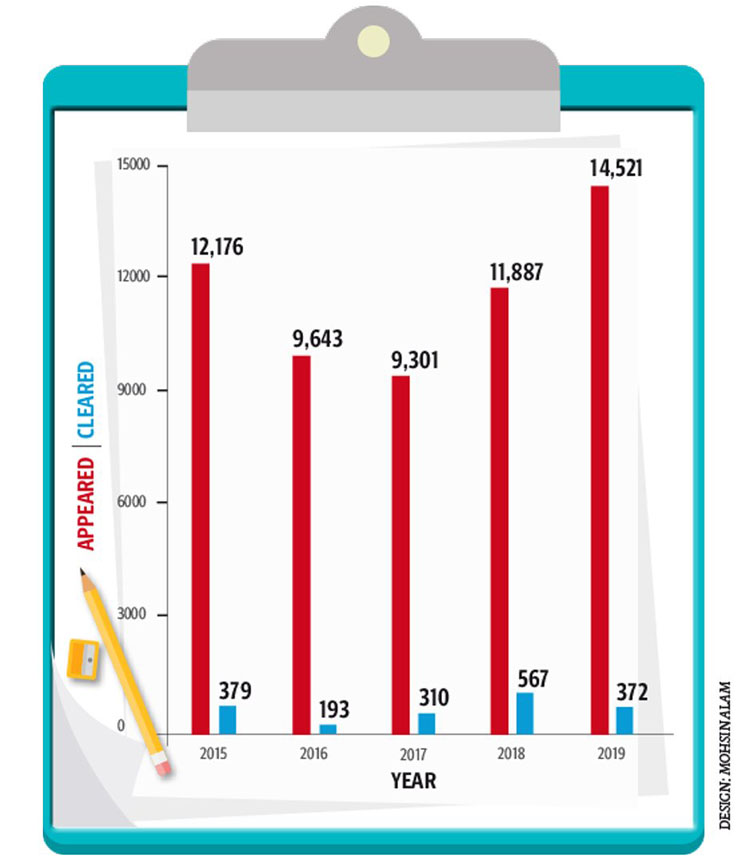 Some of this year’s unsuccessful candidates also questioned the credibility of FPSC marking practices. “I worked hard for eight months,” said Sikandar, who has a degree in political science from Karachi University. “For my CSS essay, I even made an outline before I wrote it. But when the mark sheet came out, I discovered I did not score a single mark in the essay paper,” he told The Express Tribune. “I have decided not to waste further time and energy on such an unworthy exam pattern.”

Zainab, who has a degree in electrical engineering and teaches robotics to younger students, was similarly annoyed. “This was my second attempt and I still failed,” she said. But instead of singling out just the assessment process, Zainab too saw flaws in the wider education system.

“One problem I feel is that our teachers in school and in university do not offer any proper guidelines on how to attempt CSS,” she suggested. “The CSS trend seems to be very unpopular at the moment and no university prepares students for it. I asked my teachers for special assistance but some of them actually wanted extra money for it.”

On the other hand, senior government officials told The Express Tribune that they are in the process of introducing a pre-screening test before the actual CSS paper. “Prime Minister Imran Khan has approved the move and following cabinet approval, the idea will be put before parliament,” said Prime Minister’s Special Adviser on Establishment Shahzad Arbab.

He added that the screening process will also split prospective CSS candidates into three groups: the Pakistan Administrative Service group for candidates who prefer to go for postal, railway, military and cantonment services; Inland Revenue Service group for those that have an aptitude for finance, audit and customs services; and the International Relations group for those that fit the mould for foreign affairs.

Other federal officials also said that the government is working on reforming civil services with the aim of eradicating a ‘superiority complex and lingering colonial mindset’ from the top echelons of the administrative machinery. A civil services task force led by the Prime Minister’s Special Adviser on Austerity and Institutional Reforms Dr Hussain has already prepared recommendations for cabinet review, they said.

(With additional reporting by Zubaida Abbasi from Karachi.)