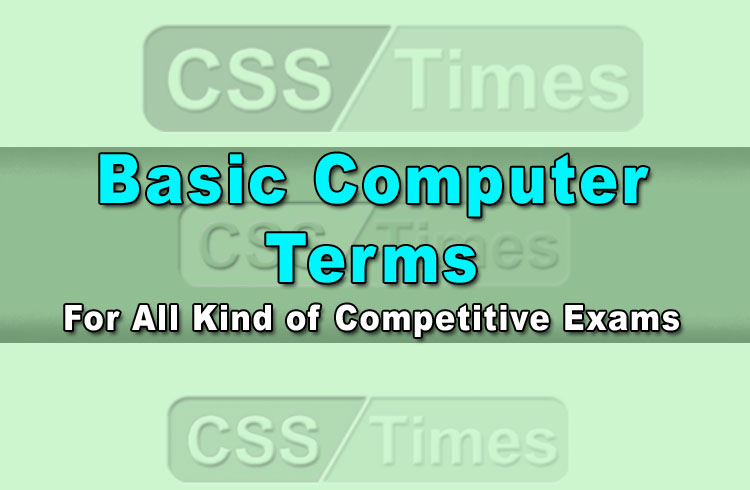 The physical parts of a computer –

Disk Drive:
A peripheral device that reads and/or writes information on a disk

Hard Drive:
A device (usually within the computer case) that reads and writes information, including the operating system, program files, and data files

Keyboard:
A peripheral used to input data by pressing keys

Modem:
A peripheral device used to connect one computer to another over a phone line

Mouse:
A peripheral device used to point to items on a monitor

NIC:
Network interface card; a board inserted in a computer that provides a physical connection to a network

Printer:
A peripheral device that converts output from a computer into a printed image

Instructions executed by a computer –

Bit
A computer’s most basic unit of information

Boot
The process of loading or initializing an operating system on a computer; usually occurs as soon as a computer is turned on

Bug
A part of a program that usually causes the computer to malfunction; often remedied in patches or updates to the program

Click:
Occurs when a user presses a button on a mouse which in turn, generates a command to the computer

Double Click:
Occurs when a user presses a button on the mouse twice in quick succession; this generates a command to the computer

Download:
Transferring data from another computer to your computer

Driver:
Software program that controls a piece of hardware or a peripheral

Folder:
A graphical representation used to organize a collection of computer files; as in the concept of a filing cabinet (computer’s hard drive) with files (folders)

Freeware:
Software provided at no cost to the user

Icon:
A small picture used to represent a file or program in a GUI interface

Internet:
A network of computer networks encompassing the World Wide Web, FTP, telnet, and many other protocols

IP number:
Internet protocol; a computer’s unique address or number on the Internet

Menu:
A list of operations available to the user of a program

Network:
A collection of computers that are connected

Peripheral:
Any of a number of hardware devices connected to a CPU

RAM:
Random access memory; the type of storage that changes; when the computer is turned off, the RAM memory is erased

ROM:
Read-only memory; the type of storage that is not changed even when the computer is turned off

Scroll Bar:
Allows the user to control which portion of the document is visible in the window; available either horizontally or vertically or both

Shareware:
Software provided at a minimal cost to users who are on their honor to send in payment to the programmer

Spreadsheet:
A program arranged in rows and columns that manipulates numbers

Tool Bar:
A graphical representation of program activities; a row of icons used to perform tasks in a program

URL:
Uniform resource locator; the address of a site on the World Wide Web; a standard way of locating objects on the Internet

Window:
A screen in a software program that permits the user to view several programs at one time

Word Processor:
A program that allows the user to create primarily text documents