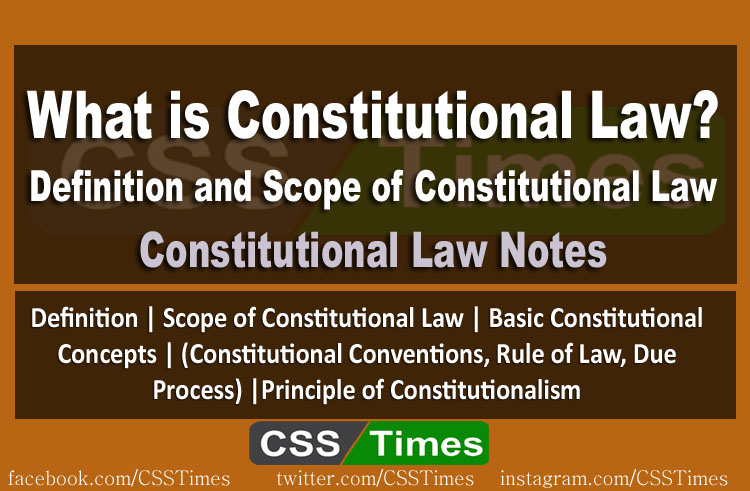 Definition and Scope of Constitutional Law

What is Constitutional Law?

Constitutional law is a type of public law that revolves solely around the distribution and exercise of government power. In the United States, the constitution is in essence, the framework for which all laws are established and to specify the separation of powers between the three branches (judicial, legislative and executive) of the federal government.

That being said, not all nation states possess a codified constitution. Those that do not; however, will typically utilize some form of law of the land that may consist of a number of consensual rules. These may include international rules on train, the separation of church and state, laws governing governmental powers, various statutory laws, customary law conventions, judge-made laws and an assortment of other frameworks.

The basic law or laws of a nation or a state which sets out how that state will be organized by deciding the powers and authorities of government between different political units, and by stating the basic law-making and structural principles of society.

The primary contract or law by which the government of a nation or state is set out and organized.

Constitutions are not necessarily written and may be based on aged customs and conventions, as is the case, in part, in England and New Zealand (the USA, Canada and Australia all have written constitutions). Note these words of Niccolo Machiavelli in his 1611 book, The Prince:

“There is nothing more difficult to arrange, more doubtful of success, and more dangerous to carry through than initiating change in a State’s constitution. The innovator makes enemies of all those who prospered under the old order, and only lukewarm support is forthcoming from those who could prosper under the new. Their support is lukewarm partly from fear of their adversaries, who have the existing law on their side, and partly because men are generally incredulous, never really trusting new things unless they have tested them by experience.”

An almost constant debate is whether a constitution, once written, should be exposed to judicial expansion – by the adaptation of it to an evolving state.

Even where written, the words and scope of the written constitution is by necessity shaped by the Courts. As lawyer and later Governor of the State of New York, Charles Edward Hughes once said, in about 1906:
“We are under a Constitution, but the Constitution is what the judges say it is.”

According to one very wide definition, constitutional law is that part of the Law which relates to the system of government of the country or it can also be defined as meaning those laws which regulate the structure of the principal organs of government and their relationship to each other and to the citizen, and determine their main function. Constitutional law pervades all areas of law in that there is hardly any department of law which does not, at one time or another become of constitutional importance. In industrial law, the freedom of association for industrial purpose and the law of picketing are of constitutional importance. In the sphere of public order and criminal law, the citizen looks to the court for protection. The constitutional lawyer has always had a particular interest in the means which the law provides for safeguarding individual liberty.

Constitutional concepts are those ideas which influence the nature or form of constitution. A basic idea, which seems to encompass these concepts and has permeated constitutional making in modem world is that of “Constitutionalism “or “limited government” i.e. the idea of including in the constitution certain rules and regulations geared towards preventing abuse or the exercise of arbitrary power-by government. This idea was first given birth to dining the developmental years of natural law, sovereign powers by divine laws.

Noteworthy among these was John Locke’s theory of ‘Social Contract’, which he believed predated societies and made government mere trustees of the common interest of the community. A written and entrenched constitution was later seen as primarily performing this role whilst an unwritten constitution performs it in a less rigid way, through the various constitutional law concepts and conventions.

Check also: Guidelines for Students Planning to Appear in CSS

Constitutionalism is government conducted in accordance with and within the limits set by a written or unwritten constitution–a body of law that is superior to and takes precedence over all ordinary laws, decisions, and actions of government offices, agencies, and institutions. A constitutional government, whether democratic or oligarchic, operates in accord with the provisions of a constitution and does not exceed the authority granted to it by that constitution.

Constitutionalism is closely related to the political principle known as the “rule of law.” Under the rule of law, the law is supreme over government officeholders, who, like ordinary citizens, are subject to and must abide by the law. Government institutions and officers must, among other things, follow procedures prescribed by law and observe the legally guaranteed rights and liberties of individuals

A written constitution contains the most important laws by which a nation’s citizens agree to live, and it outlines the basic structure of their government. Thus, democratic constitutionalism based on ideals of individual freedom, community rights, and limited government power — creates the framework for governing a democracy.

Affirmative rights tell the government what it must do and citizens what they are entitled to. Such “entitlements” may include social, economic, and cultural rights in the form of government guarantees of various social indicators. There may be guarantees of primary and secondary education for all boys and girls, guaranteed “well-being” after retirement, or jobs and health care for all citizens.

Constitutionalism is closely related to the Anglo-American political principle called the “rule of law.” The “rule of law,” a concept deeply rooted in the history and development of law in England and English-speaking North America, means the “supremacy of law.” In any political society operating under the rule of law, the law is supreme over officeholders in the government, as it is over the general populace. In the society, there is a single body of law applicable to all members of the society, a body of law applicable to those who govern as well as those who are governed. Government officers, like ordinary citizens, are subject to and must abide by the law; no one is above the law. Government officers, agencies, and institutions must, among other things, follow legally prescribed procedures and observe the legally guaranteed rights of individuals.