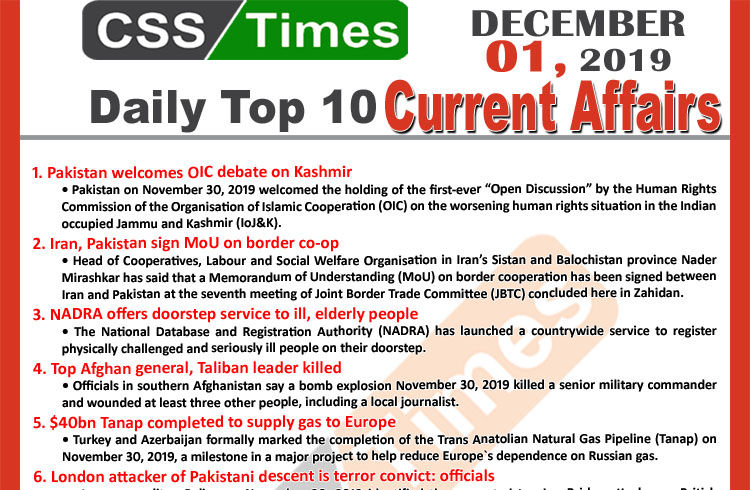 • Pakistan on November 30, 2019 welcomed the holding of the first-ever “Open Discussion” by the Human Rights Commission of the Organisation of Islamic Cooperation (OIC) on the worsening human rights situation in the Indian occupied Jammu and Kashmir (IoJ&K).
• The Open Discussion session was organised under the auspices of The Independent Permanent Human Rights Commission (IPHRC) as part of 16th Regular Session of the OIC held in Jeddah from November 25-28 2019. The session was attended by all members of the commission as well as a large number of representatives of the OIC member and observer states.
• “Pakistan appreciates that, like other international human rights organisations, the IPHRC has repeatedly condemned India’s illegal actions and worsening human rights situation in IoJ&K. This first-ever Open Session reflects the growing concern of the Muslim Ummah, OIC and IPHRC on the rapidly deteriorating situation in IoJ&K,” the Foreign Office spokesperson said in a statement.

• Head of Cooperatives, Labour and Social Welfare Organisation in Iran’s Sistan and Balochistan province Nader Mirashkar has said that a Memorandum of Understanding (MoU) on border cooperation has been signed between Iran and Pakistan at the seventh meeting of Joint Border Trade Committee (JBTC) concluded here in Zahidan.
• “Negotiations with the Pakistani delegation were held in Zahedan for two days in a friendly atmosphere,” Mirashkar told IRNA.
• Sistan and Balochistan in Iran and Balochistan province in Pakistan had a special role in the economic and trade exchanges between the two countries. In this case, issues such as the study of electronic systems and inter-system exchanges, transportation and the development of rail and land infrastructure were discussed, said the Head of Cooperatives, Labour and Social Welfare Organization in Sistan and Balochistan province. He added that allocation of preferential tariffs for 60 Iranian and 60 Pakistani goods was also examined in the meeting between the two sides.

• The National Database and Registration Authority (NADRA) has launched a countrywide service to register physically challenged and seriously ill people on their doorstep.
• The service, which in the past was arguably used to appease influential persons and their relatives, will now be available to the common people who really need it.
• Under the service, the NADRA employees equipped with biometric verification machines will not just visit such applicants to register them but also deliver their computerised national identity cards (CNICs) to their homes.
• A senior NADRA official said the project was in line with Prime Minister Imran Khan`s vision of providing maximum facilities to public by bringing about an improvement in service delivery

• Officials in southern Afghanistan say a bomb explosion November 30, 2019 killed a senior military commander and wounded at least three other people, including a local journalist.
• A high-ranking Taliban official has also been killed in clashes with security forces in Jowzjan province in Afghanistan’s north.
• Separately, an apparent drone attack in the southeast part of the country is said to have killed at least six civilians, including a newborn baby. The Taliban took responsibility for the roadside bombing in Helmand province, where most of the districts are either controlled or influenced by the insurgent group.
• The provincial police spokesman told that Gen Zahir Gul Muqbil, the commander of an army border unit, was heading to the volatile Marjah district along with a group of journalists to visit an ongoing counterinsurgency operation when the convoy struck a roadside bomb. A high-ranking Taliban official has been killed in clashes with security forces in Jowzjan province.

• Turkey and Azerbaijan formally marked the completion of the Trans Anatolian Natural Gas Pipeline (Tanap) on November 30, 2019, a milestone in a major project to help reduce Europe`s dependence on Russian gas.
• Tanap comprises the longest stretch of the $40 billion Southern Gas Corridor, a series of pipelines that will carry gas from Azerbaijan`s Shah Deniz II field to Europe.
• The $6.5bn Tanap crosses the breadth of Turkey, east to west, and could transport up to 16 billion cubic metres (bem) of Azeri gas a year. Europe is allocated 10 bem, with 6 bcm earmarked for the Turkish market.
• Capacity could be increased to 31 bcm with additional investment.

• The Metropolitan Police on November 30, 2019 identified the suspected London Bridge attacker as British national Usman Khan, a 28-year-old man from Staffordshire.
• Born in London, Khan is of Pakistani ethnicity.
• `We are now in a position to confirm the identity of the suspect as 28-year-old Usman Khan, who had been residing in the Staffordshire area. As a result, officers are, tonight, carrying out searches at an address in Staffordshire,` said Assistant Commissioner Neil Basu in a statement issued past midnight.

• A court in Suriname convicted President Desi Bouterse of murder for the execution of 15 opponents in 1982 following a coup to seize power, sentencing the man who has dominated the former Dutch colony`s recent history to 20 years in prison.
• Opposition parties called for Bouterse, currently in China on an official visit, to step down.
• Bouterse led the South American country through the 1980s as head of a military government, then assumed office again in 2010 and secured re-election five years later.
• The courtruled that Bouterse had overseen an operation in which soldiers under his command abducted 16 leading government critics including lawyers, journalists and university teachers from their homes and killed 15 of them at a colonial fortress in the capital Paramaribo.

• Facebook published a correction on a user`s post on November 30, 2019 following a demand from Singapore, the first time a tech giant has complied with the city-state`s law against misinformation.
• Authorities had ordered the social media giant to correct a post promoting an article on a fringe news site containing `scurrilous accusations` of election rigging, ramping up their use of a controversial law against misinformation.
• The law gives ministers powers to tell platforms to put warnings next to posts they deem false, but that activists fear could be used to curb free speech.
• A post by Alex Tan who runs anti-government website the States Times Review had a correction notice placed below it after a government request, Facebook confirmed.

9. No phones, scripted tweets – How Trump’s Afghanistan trip was kept under wraps

• Notorious for leaks and chastened by previous security lapses, the White House went to unusual lengths to keep President Donald Trump’s Thanksgiving trip to Afghanistan under wraps, devising a cover story for his movements that included posting scripted tweets while he was in the air, administration officials said.
• Trump dropped in unannounced on troops at Afghanistan’s Bagram military air base in his first trip to the country and only his second to a war zone during his presidency. He served soldiers a turkey dinner and posed for selfies, before telling reporters that the United States and Taliban hoped to resume peace talks.
• Perhaps the most surprising aspect of the 33-hour roundtrip, which White House spokeswoman Stephanie Grisham said had been weeks in the making, was the administration’s success in keeping it secret until shortly before the president left Afghanistan to return home

• Tokyo`s National Stadium, set to be the centrepiece of next year`s Olympic Games, was officially finished on Saturday and handed over to its owner and operator, the Japan Sport Council.
• Construction on the 60,000-capacity stadium was finished earlier this month but November 30, 2019 marked the official completion date and a landmark moment for organisers eight months out from the start of the Games.
• It will be officially unveiled on Dec 21, with the Emperors Cup football final being the first sporting event to be held there on New Years Day. 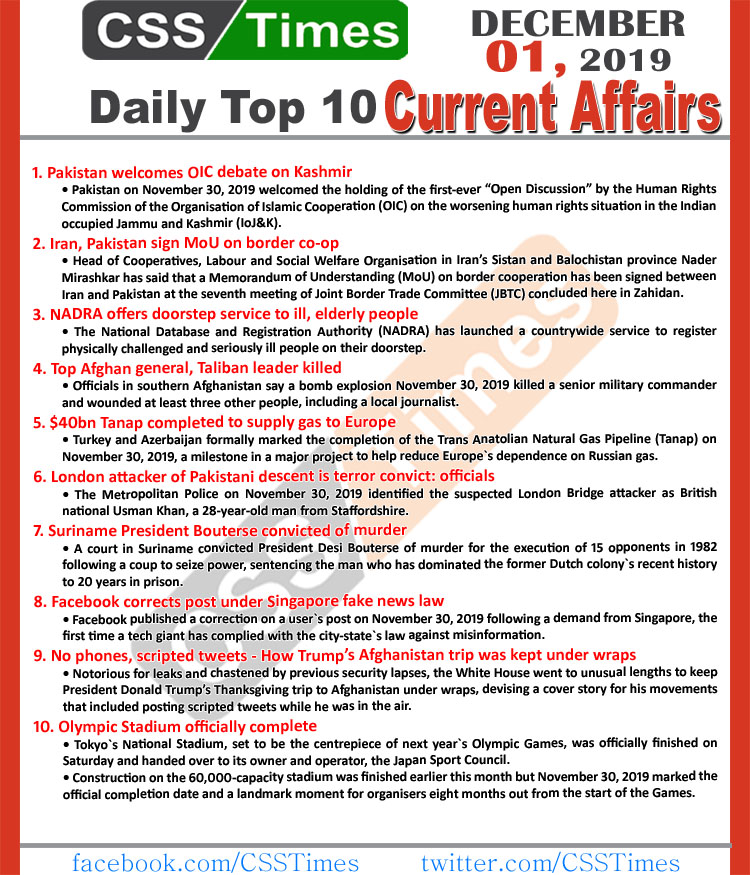