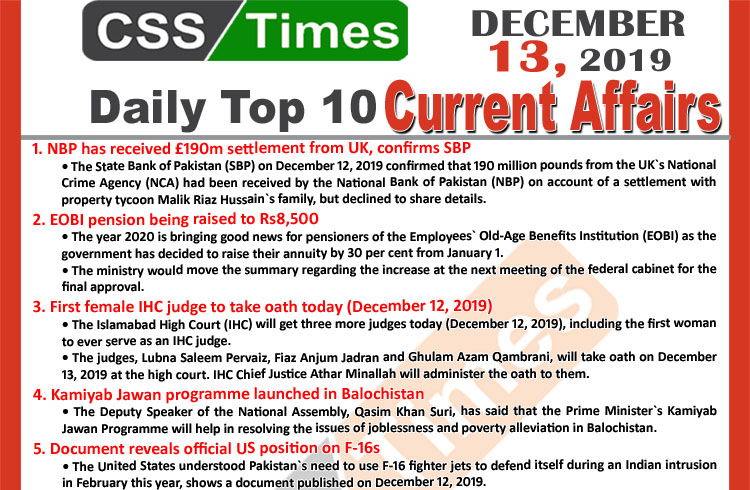 • The State Bank of Pakistan (SBP) on December 12, 2019 confirmed that 190 million pounds from the UK`s National Crime Agency (NCA) had been received by the National Bank of Pakistan (NBP) on account of a settlement with property tycoon Malik Riaz Hussain`s family, but declined to share details.
• Testifying before the Senate Standing Committee on Finance and Revenue, SBP`s deputy governor Jameel Ahmad said: `The payment has been received by the National Bank of Pakistan, but the question about the account in which it has been kept should be addressed to the government of Pakistan.
• The disclosure followed a heated discussion among the participants of the meeting presided over by Senator Farooq H. Naek, who instructed SBP governor Dr Reza Baqir to attend the committee`s next meeting to respond to various questions being raised by senators.

• The year 2020 is bringing good news for pensioners of the Employees` Old-Age Benefits Institution (EOBI) as the government has decided to raise their annuity by 30 per cent from January 1.
• Speaking at the inauguration ceremony of `Ciniplex and Commercial Complex` on December 12, 2019, Special Assistant to the Prime Minister (SAPM) on Overseas Pakistanis and Human Resource Development Sayed Zulfikar Abbas Bukhari said that after the increase, the EOBI pensioners would receive Rs8,500 per month.
• The ministry would move the summary regarding the increase at the next meeting of the federal cabinet for the final approval.
• The SAPM said the PTI government had in its efforts to give more relief to pensioners twice increased their annuity in just one-and-a-half year`s time.

• The Islamabad High Court (IHC) will get three more judges today (December 12, 2019), including the first woman to ever serve as an IHC judge.
• The Ministry of Law and Justice issued a notification regarding their appointments on December 11, 2019.
• The judges, Lubna Saleem Pervaiz, Fiaz Anjum Jadran and Ghulam Azam Qambrani, will take oath on December 13, 2019 at the high court. IHC Chief Justice Athar Minallah will administer the oath to them.
• The notification said that the president has appointed three additional judges to the IHC for a year.
• Under Article 175-A of the Constitution, the initial appointment of an additional judge in the high court is made for one year

• The Deputy Speaker of the National Assembly, Qasim Khan Suri, has said that the Prime Minister`s Kamiyab Jawan Programme will help in resolving the issues of joblessness and poverty alleviation in Balochistan.
• Speaking at the launching of Kamiyab Jawan Programme at a ceremony in Balochistan University of Information Technology, Engineering and Management Sciences here on December 12, 2019, he said that the programme would enable youths to obtain loans by applying online and without any recommendation from a politician or a government official.
• The minister asked the youths to take benefit from the programme and focus on their future goals.

• The United States understood Pakistan`s need to use F-16 fighter jets to defend itself during an Indian intrusion in February this year, shows a document published on December 12, 2019.
• The document, obtained by the US News & World Report magazine, however, also shows that Washington was not happy with Islamabad`s decision to deploy these US-supplied aircraft and missiles to forward positions.
• The US State Department raised both points in a letter then-undersecretary of State for Arms Control and International Security Affairs Andrea Thomson wrote to Air Chief Marshal Mujahid Anwar Khan.

• Dozens of jubilant workers and a number of senior leaders of the Pakistan Peoples Party (PPP), including party chairman Bilawal Bhutto-Zardari and his sister Aseefa, on December 12, 2019 received former president Asif Ali Zardari outside the Pakistan Institute of Medical Sciences (PIMS) after his release on the orders of the Islamabad High Court (IHC).
• The release came a day after he was granted bail by the IHC in the Park Lane and fake bank accounts cases on medical grounds.
• Soon after his release, Mr Zard ariwas driven to his F-8 residence known as Zardari House the place from where he was arrested by a team of the National Accountability Bureau (NAB) in a dramatic way six months ago

• United Nations Secretary General Antnio Guterres urged countries and companies December 12, 2019 to tackle climate change, saying failure to do so would mean economic disaster.
• Speaking at the annual UN climate meeting in Madrid, Guterres said fears that measures to cut greenhouse gas emissions would decimate existing industries ignored the opportunities arising from the `green economy.` For too long, vested interests have peddled the false story that economic growth and tackling climate change are incompatible, the UN chief said. This is nonsense.
• In fact, failing to tackle global heating is a sure-fire recipe for economic disaster, Guterres added.

• Britain voted on December 12, 2019 in a deeply divisive election that posed a historic choice between an imminent split from the European Union and another referendum that could scrap the entire BREXIT process.
• A decisive victory for Prime Minister Boris Johnson in the third poll in less than five years would almost certainly end Britain`s 46-year involvement in the European project at the end of next month.
• The country would cut ties with its closest trading partners and look to regain the legal and border controls BREXIT supporters sought in the original 2016 EU membership vote

• Algeria held a tense presidential election on December 12, 2019 meant to bring stability after a year of turmoil, but voting was marred as protesters stormed polling stations and thousands rallied in the capital.
• The unpopular vote comes almost 10 months after a people power movement ousted president Abdelaziz Bouteflika, 82, after two decades in office, and as demonstrators keep pushing for an end to the military-backed political system.
• Tens of thousands rallied in central Algiers, defying a heavy police presence backed by water cannon and helicopters, and despite the arrests of at least 10 activists meant to prevent are peat of the previous day`s anti-election rallies

• An Indonesian cave painting that depicts a prehistoric hunting scene could be the world`s oldest figurative artwork dating back nearly 44,000 years, a discovery that points to an advanced artistic culture, according to new research.
• Spotted two years ago on the island of Sulawesi, the 4.5 metre wide painting features wild animals being chased by half human hunters wielding what appear to be spears and ropes, said the study published in the journal Nature.
• Using dating technology, the team at Australia`s Griffith University said it had confirmed that the limestone cave painting dated back at least 43,900 years during the Upper Palaeo lithic period. 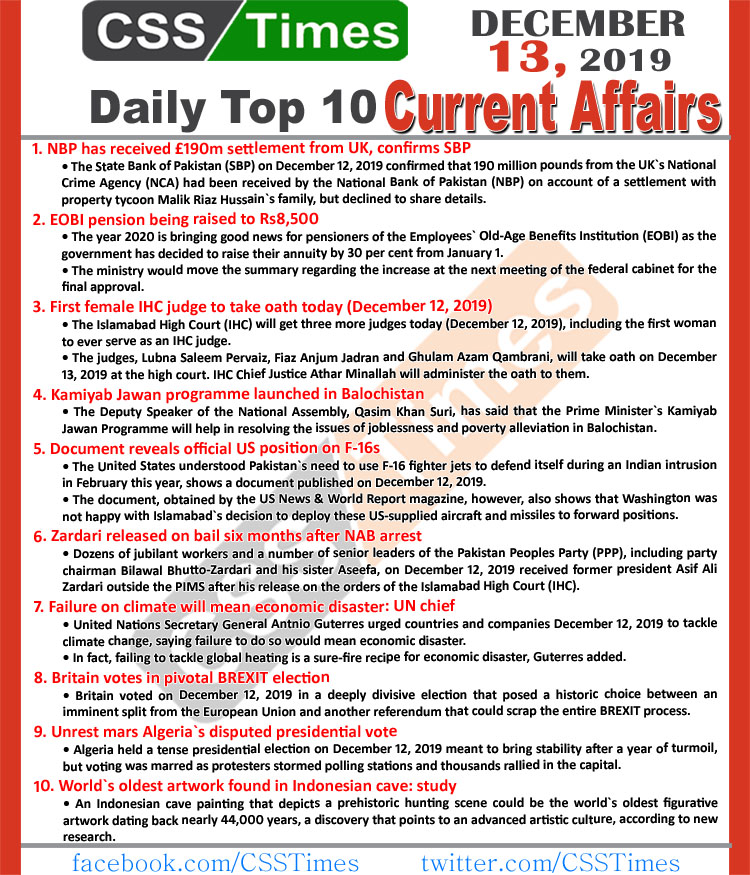