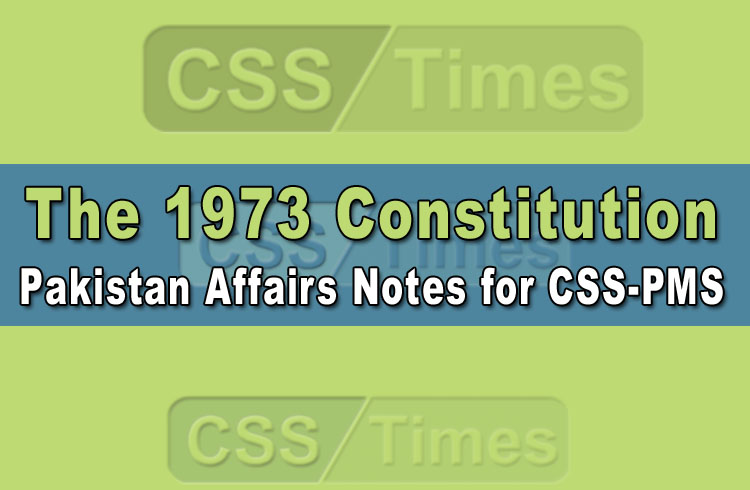 Abrogation of the 1962 Constitution on March 25, 1969 led to second martial law in the country. Yahya Khan handed over power to Zulfikar Ali Bhutto on December 20, 1971 after the first general elections. But martial law continued and there was no constitution.

National Assembly approved an Interim Constitution, which was enforced on April 21, 1972.

Constitutional Committee comprising National Assembly (NA) members from all parties was set up in April 1972. Law Minister was the Chairman of this Committee.

All parties agreed on the future political system in October 1972. The Committee reported on December 31, 1972. After long deliberations and compromises final draft was approved unanimously on April 10, 1973. The new Constitution was enforced on August 14, 1973.

The Constitution functioned since then with two gaps. It remained operational during following periods:

3: Features of the Constitution

It was a parliamentary constitution having powerful Prime Minister (PM) as head of government with a very weak President.

President must act on the advice of PM. All his orders were to be countersigned by PM. Prime Minister to be elected by the NA.

PM exercised all executive authority. PM was answerable to the NA.

In 1985, powers of the President were increased. He enjoyed some discretion in appointments of PM. He had power to dissolve the NA. He had the powers of appointment of caretaker PM. He gives his assent to bills passed by the parliament or returns these.

Must be at least 45 years of age, Muslim, qualified to become member of the NA. He is elected by the Parliament and the Provincial Assemblies for 5 years.

Federation of Pakistan has four provinces and federally administered areas.
Two lists are given in the constitution: Federal list and Concurrent list. Residuary powers belong to provinces.

Provincial Governors are appointed by the President on the advice of the PM. Elected Chief Minister exercises executive powers. Parliamentary system is there in the provinces. Size of the provincial assemblies varies:
In 2002:
Punjab 371
Sindh 168
NWFP 124
Balochistan 65

Centre has emergency powers. Governor’s rule can be imposed if the government cannot function in the provinces.
Provinces are dependent on centre for Finances.

a. Islamic provisions are provided in Principles of Policy. Foreign policy principles are also given under this heading.

b. Fundamental Rights are secured in the constitution and are implemented through the highest court.

c. Title of the state is Islamic Republic of Pakistan.
d. The objectives resolution was the Preamble in the initial constitution but through article 2-A of 8th amendment it was inserted in the constitution in 1985.
e. Islam was declared the State Religion of Pakistan.
f. Definition of Muslim was included by an amendment.
g. Principles of Policy also carry some Islamic clauses.
h. Council for Islamic Ideology is established under the constitution. i. Federal Shariat Court was added in 1981.

j. Urdu is declared National Language, however English may be used for official purposes until arrangements would be made for its replacement by Urdu.
k. Provincial Assembly may prescribe measures for teaching, promotion and use of a provincial language in addition to the national language.

l. National Security Council was added in 2002 in advisory capacity.

m. An independent judiciary is given under the constitution. Supreme Court of Pakistan is the highest court. One High Court is established in each province and one in Azad Kashmir. A chain of lower courts is there under the high courts.