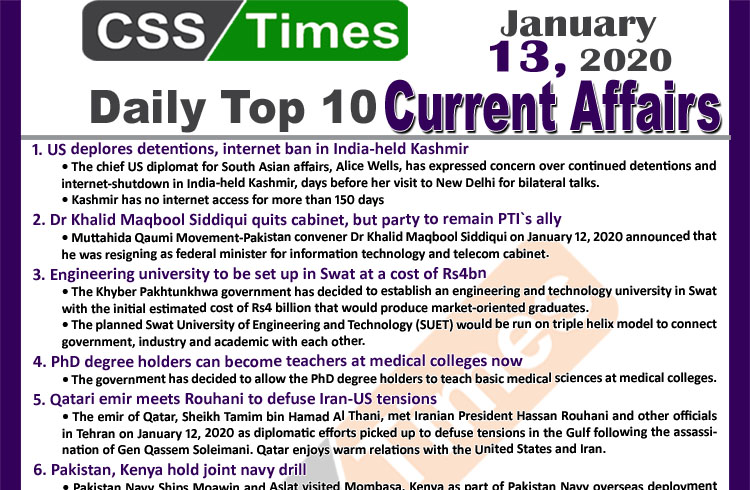 • The chief US diplomat for South Asian affairs, Alice Wells, has expressed concern over continued detentions and internet-shutdown in India-held Kashmir, days before her visit to New Delhi for bilateral talks.
• `Closely following US ambassador to India and other foreign diplomats` recent trip to Jammu & Kashmir. Important step,` she wrote in a tweet posted on the official website of the US State Department`s Bureau of South and Central Asian Affairs.
• `We remain concerned by detention of political leaders and residents, and internet restrictions. We look forward to a return to normalcy,` she added.
• Kashmir has no internet access for more than 150 days

• Muttahida Qaumi Movement-Pakistan convener Dr Khalid Maqbool Siddiqui on January 12, 2020 announced that he was resigning as federal minister for information technology and telecom cabinet.
• The MQM made it clear that it had no plan to ask its lawmaker Farogh Nasim to quit the federal cabinet though the ruling PTI without asking his party had given the portfolio of law to him, because they needed `best lawyer`, Dr Siddiqui said, adding that his party was promised one more ministry but the PTI despite repeated assurances didnotfulH1 its promise.
• The ruling PTI had given two ministries to MQM lawmakers after the two coalition partners had signed a nine-point memorandum of understanding (MoU) in August 2018.

3. Engineering university to be set up in Swat at a cost of Rs4bn

• The Khyber Pakhtunkhwa government has decided to establish an engineering and technology university in Swat with the initial estimated cost of Rs4 billion that would produce market-oriented graduates.
• The planned Swat University of Engineering and Technology (SUET) would be run on triple helix model to connect government, industry and academic with each other.
• `Unlike other universities in the province that solely depend on the government funds, the SUET will have its own sustainability plan,` said Hamid Naveed, chief planning officer of higher education department.

• The emir of Qatar, Sheikh Tamim bin Hamad Al Thani, met Iranian President Hassan Rouhani and other officials in Tehran on January 12, 2020 as diplomatic efforts picked up to defuse tensions in the Gulf following the assassination of Gen Qassem Soleimani. Qatar enjoys warm relations with the United States and Iran.
• Syria`s Prime Minister Imad Khamis also led a high-level delegation to Iran, including the defence and foreign ministers. Syrian state media described it as an important visit in the light of recent events, without elaborating.
• Iran is a key ally of Syrian President Bashar Assad in his country`s civil war, and Gen Soleimani had mobilised militias and coordinated military aid

• The US military reportedly made a failed attempt to kill a separate senior Iranian commander in Yemen the same night the Pentagon carried out the successful airstrike that took out Iranian Quds force commander Qassem Soleimani in Iraq last week.
• U.S. military officials, speaking on the condition of anonymity, now say that a military strike targeting Iranian Revolutionary Guard Corps (IRGC) commander Abdul Reza Shahlai was unsuccessful. Shahlai was said to be a key figure in financing the activities of the Iranian military force.

• A volley of rockets slammed into an Iraqi airbase north of Baghdad where US forces have been based, wounding four local troops, the Iraqi military said on January 12, 2020.
• Its statement said eight Katyusha-type rockets landed on Al-Balad airbase, wounding two Iraqi officers and two airmen.
• Reuters, quoting military officials, identified the wounded as Iraqi soldiers. No official confirmation, however, has come from either the Iraqi or US government so far.
• Al-Balad is the main airbase for Iraq’s F-16s, which it bought from the US to upgrade its air capacities.

9. Both sides agree to stop fighting in Libya

• Both sides in Libya`s conflict agreed to a ceasefire from January 12, 2020 to end nine months of fighting, following weeks of international diplomacy and calls for a truce by power-brokers Russia and Turkey.
• The oil-rich North African country has been wracked by bloody turmoil since a 2011 NATO-backed uprising killed long-time dictator Moamer Qadhafi, with multiple foreign power s now involve d.
• The UN-recognised Government of National Accord (GNA) in Tripoli had been under attack since last April from forces loyal to eastern-based strongman Khalifa Haftar, which on January 6 captured the strategic coastal city of Sirte.

• Serena Williams won her first title since the 2017 Australian Open with a 6-3, 6-4 victory over Jessica Pegula at the Auckland Classic on January 12, 2020 but was unable to complete the perfect week in New Zealand when she lost the doubles final.
• The 38-year-old Serena, who said she would donate her US$43,000 winners cheque to Australian bushfire relief funds, and good friend Caroline Wozniacki were beaten by American duo Asia Muhammad and Taylor Townsend 6-4, 6-4.
• The result meant that Wozniacki was unable to complete her own fairytale farewell to a tournament with which she has become synonymous, having played in New Zealand`s largest city every year since 2015 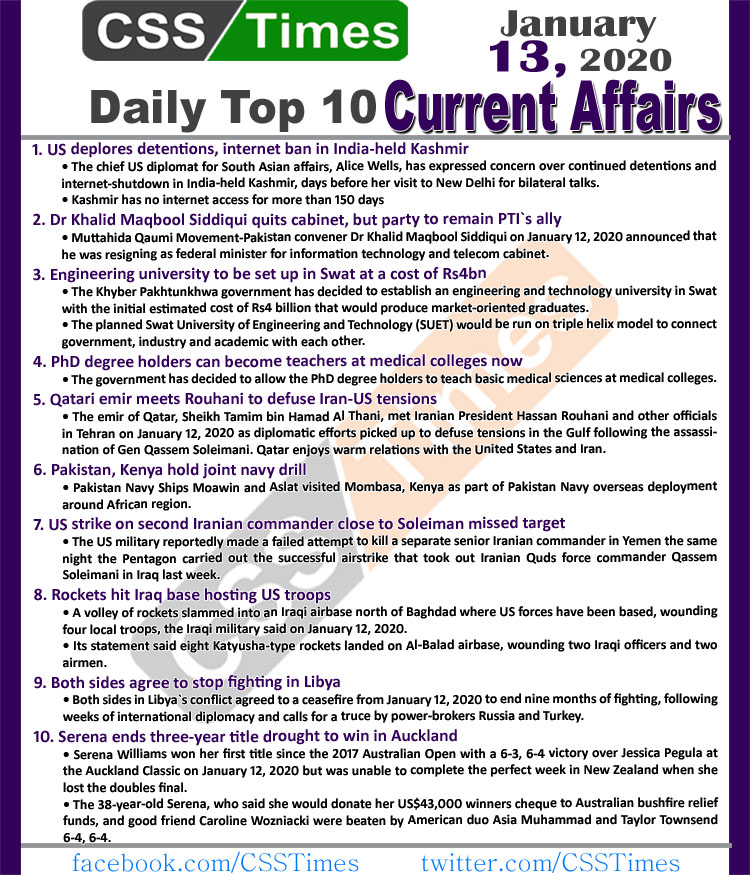