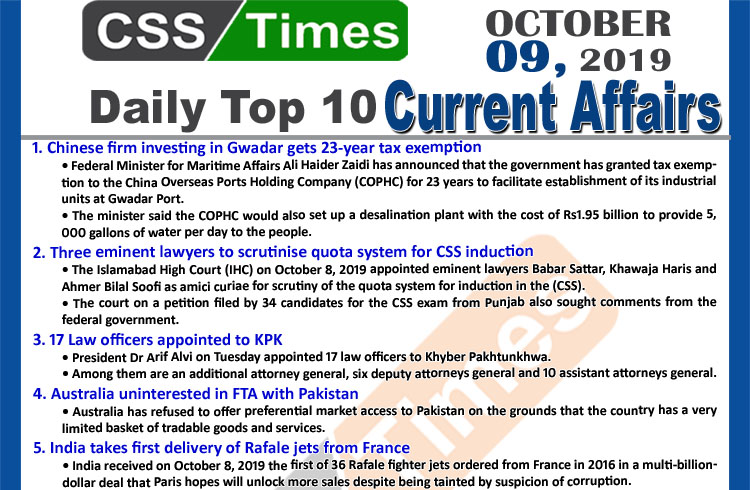 • Federal Minister for Maritime Affairs Ali Haider Zaidi has announced that the government has granted tax exemption to the China Overseas Ports Holding Company (COPHC) for 23 years to facilitate establishment of its industrial units at Gwadar Port.
• Accompanied by COPHC Chief Executive Officer Zhang Baozhong and Minister for Economic Affairs Hammad Azhar, Mr Zaidi told a press conference on October 8, 2019 that the COPHC that had already been operating at Gwadar Port would get tax exemption for installation of machinery and other equipment at the port.
• The initiative was a step towards relocation of the Chinese manufacturing industry in Gwadar and engaging the local labour, he said, adding that the move would ultimately boost Pakistan`s economy.
• The minister said the COPHC would also set up a desalination plant with the cost of Rs1.95 billion to provide 5,000 gallons of water per day to the people.

• The Islamabad High Court (IHC) on October 8, 2019 appointed eminent lawyers Babar Sattar, Khawaja Haris and Ahmer Bilal Soofi as amici curiae for scrutiny of the quota system for induction in the Central Superior Services (CSS).
• The court on a petition filed by 34 candidates for the CSS exam from Punjab also sought comments from the federal government.
• The petitioners contended that the quota system impeded a merit-based induction. They said some of the successful candidates were students of a coaching academy where a member of Federal Public Service Commission (FPSC) was also teaching.
• `The petitioners have meritorious education record from reputed universities/educational institutions. They were aspirant to appear in the competitive examination held annually to all vacancies/posts in BPS-17 under the federal government.

• President Dr Arif Alvi on Tuesday appointed 17 law officers to Khyber Pakhtunkhwa.
• Among them are an additional attorney general, six deputy attorneys general and 10 assistant attorneys general.
• According to a notification issued by the law and justice division, the law officers have been appointed under the Central Law Officers Ordinance, 1970.
• Nine of them were appointed in Peshawar, three in Abbottabad, two in Bannu and Mingora each and one in Dera Ismail Khan.
• An elected member of the Khyber Pakhtunkhwa Bar Council, Qazi Babar Irshad, was appointed an additional attorney general in Peshawar. He served as the additional deputy prosecutor general in the defunct Khyber Pakhtunkhwa Ehtesab Commission.

4. Australia uninterested in FTA with Pakistan

• Australia has refused to offer preferential market access to Pakistan on the grounds that the country has a very limited basket of tradable goods and services.
• The formal demand for initiation of negotiations on a free trade agreement (FTA) covering goods, services and investment between the two countries was made in a meeting with top Australian officials in Islamabad on October 8, 2019.
• Data show that Pakistan has higher bilateral trade in services with Australia than in goods with services imports worth $662 million in 2016-17, while exports for the same at $137m.
• The bilateral trade in goods, though less in volume, is again highly in favour of Australia as its exports to Pakistan stood at $304.6m in 2018-19 while imports were valued at $206.5m.

• India received on October 8, 2019 the first of 36 Rafale fighter jets ordered from France in 2016 in a multi-billion-dollar deal that Paris hopes will unlock more sales despite being tainted by suspicion of corruption.
• Indian Defence Minister Rajnath Singh joined his French counterpart Florence Parly for a ceremony at the Dassault Aviation factory in Merignac, near the southwestern city of Bordeaux, on the Indian Air Force`s birthday.
• Standing next to the plane, decorated in the colours of the Indianflag, Singh hailed a `historic and landmark day for the Indian armed forces`, noting the Rafale `will add to the strength of our air force` India, which in February fought air battles with Pakistan over the occupied territory of Kashmir, is seeking to renew its ageing fleet of Jaguar, Mirage 2000, Sukhoi 30, and Mig 21 and 27 jets.
• It signed a deal in 2016 to buy 36 Rafales from France, but delivery has been held up by corruption allegations levelled by the opposition Congress party

• Grinding trade disputes are undermining the global economy, which is set to see its slowest growth in nearly a decade, the new IMF chief said on October 8, 2019.
• Research shows the impact of the trade conflict is widespread and countries must be ready to respond in unison with cash infusions, Kristalina Georgieva said in her first speech as managing director of the International Monetary Fund.
• She also called for a ramp-up in carbon taxes to address the other challenge facing the global economy: climate change.

• A top Al Qaeda commander was killed in a raid by Afghan forces last month, Afghan intelligence officials said on October 8, 2019, in an operation backed by US air strikes that also killed tens of civilians.
• Afghanistan`s National Directorate for Security said in a statement on October 8, 2019 that the raid on Sept 23 killed Asim Omar along with six other Al Qaeda members in the southern Helmand province.
• Omar was the head of Al Qaeda operations in South Asia.
• Among those killed was Raihan, Omar`s courier to Ayman Al-Zawahiri, the leader of the Al Qaeda network, the statement added.

• The Trump administration on October 8, 2019 blocked an ambassador from testifying to the US House of Representatives` impeachment investigation of President Donald Trump`s dealings with Ukraine, a move top House Democrats vowed to counter with a subpoena.
• The chairmen of three House committees leading the impeachment investigation said they would compel testimony from US Ambassador to the European Union Gordon Sondland, a Trump donor who started his diplomatic job in July. The investigators are interested in what the ambassador knew and what his role was in Trump`s efforts to get Ukraine to probe former Vice President Joe Biden, who leads the field of potential challengers to the Republican president.
• Through his lawyer on Tuesday, Sondland said he hoped `the issues raised by the State Department that preclude his testimony will be resolved promptly.

• Canadian American cosmologist James Peebles and Swiss astronomers Michel Mayor and Didier Queloz on October 8, 2019 won the Nobel Physics Prize for research that increases the understanding of our place in the Universe.
• Peebles won one-half of the prize `for theoretical discoveries that have contributed to our understanding of how the Universe evolved after the Big Bang`, professor Goran Hansson, secretary general of the Royal Swedish Academy of Sciences, told a press conference.
• Mayor and Queloz shared the other half for the first discovery, in October 1995, of a planet outside our solar system an exoplanet orbiting a solar-type star in the Milky Way.
• `Their discoveries have forever changed our conceptions of the world,` the jury said.
• Developed over two decades since the mid-1960s, Peebles` theoretical framework is `the basis of our contemporary ideas about the Universe`.

• Germany`s 2014 World Cup winner Bastian Schweinsteiger on October 8, 2019 announced his retirement at the age of 35, following the end of the American MLS season, ending an 18-year professional career.
• Schweinsteiger, who has played for Chicago Fire since 2017, is among the most decorated German footballers, having won many titles with Germany`s Bayern Munich and the national team. He is married to former tennis player Ana Ivanovic.
• A midfielder, Schweinsteiger played for Bayern Munich from 2002 to 2015, winning eight league titles, seven German Cups and the 2013 Champions League with the dominant Bundesliga team.
• He then had a brief stint at Manchester United from 2015-17 before joining Chicago Fire in the United States.
• Schweinsteiger also earned 121 caps for Germany, scoring 24 goals and crowning his international career with the 2014 World Cup victory in Brazil. 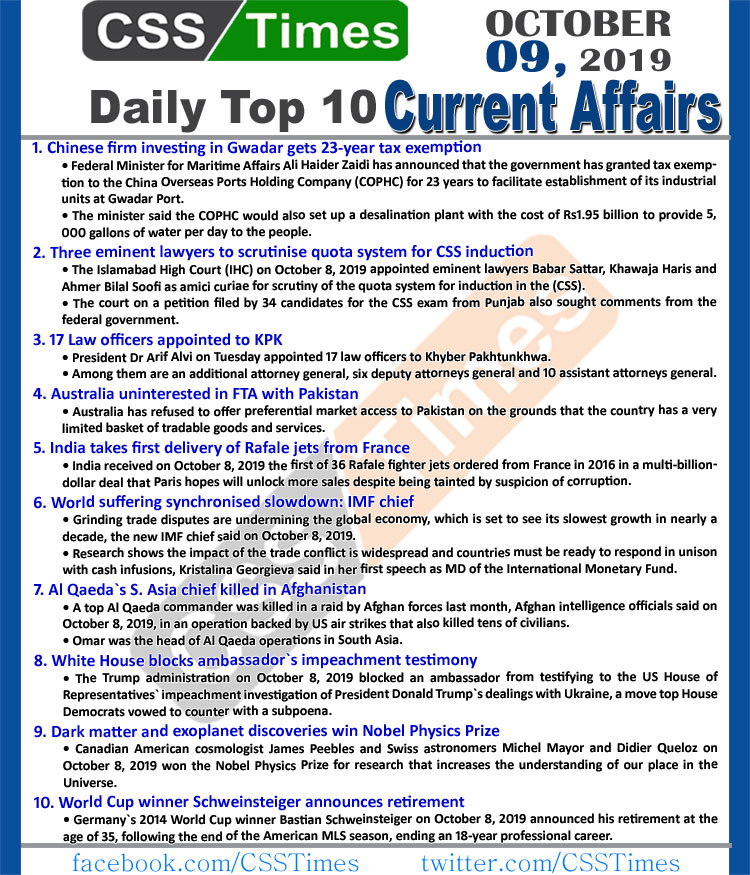