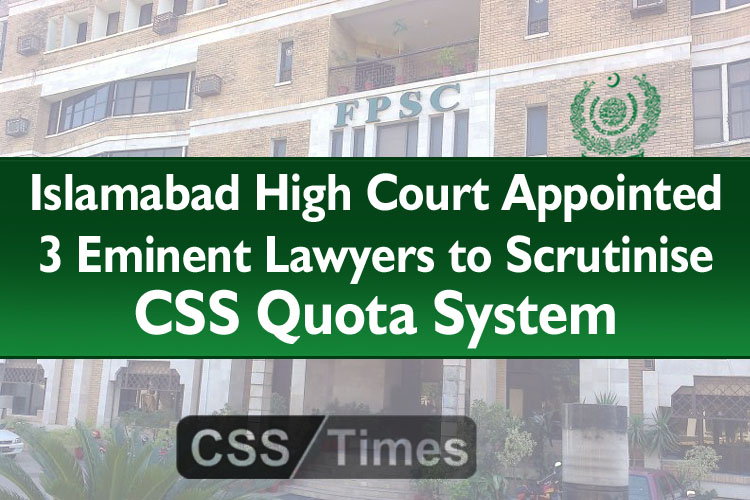 The court on a petition filed by 34 candidates for the CSS exam from Punjab also sought comments from the federal government.

The petitioners contended that the quota system impeded a merit-based induction. They said some of the successful candidates were students of a coaching academy where a member of Federal Public Service Commission (FPSC) was also teaching.

`The petitioners have meritorious education record from reputed universities/educational institutions. They were aspirant to appear in the competitive examination held annually to all vacancies/posts in BPS-17 under the federal government.

The FPSC published an advertisement for the CSS competitive examination 2018 for recruitment in BPS-17 in different occupational groups.In the advertisement, there was no reservation of any regional quota but a quota for women and minorities was mentioned.

After fulfilling all the formalities, the petitioners were issued admission certificates and a schedule of examination in Jan 2018. They appeared in the written examination and passed the same. Subsequently, they were issued letters requiring them to appear for medical examination and psychological assessment. Finally, the petitioners were called for interviews/viva voce in Dec 2018. The process of interview completed in April 2019.

However, because of the quota system letters were issued to 281 candidates for posting in BS-17, said the petition.

`The result of CSS competitive examination-2018 came as a big surprise to the petitioners when they came to know that though they have cleared the written examination as well as the viva voce/interview, yet they could not secure a post on account of limited seats/quota available for candidates having domicile of Punjab.

The petition said a member of the interview panel committee of the FPSC was among the visiting faculty of a Lahore-based private academy that offered special coaching classes for CSS exams.

It said the fixation of the period for quota system in the constitution had a strong rationale that with the passage of time and on account of advancement in all spheres of life people from all areas of Pakistan would have equal access to resources.

`The rationale for reservation of appointment on the basis of quota system was because of the uneven economic development and lack of appropriate educational facilities in certain parts of the country.

But the rationale for which the quota system was envisaged and protected in the constitution does not exist anymore, said the petition.