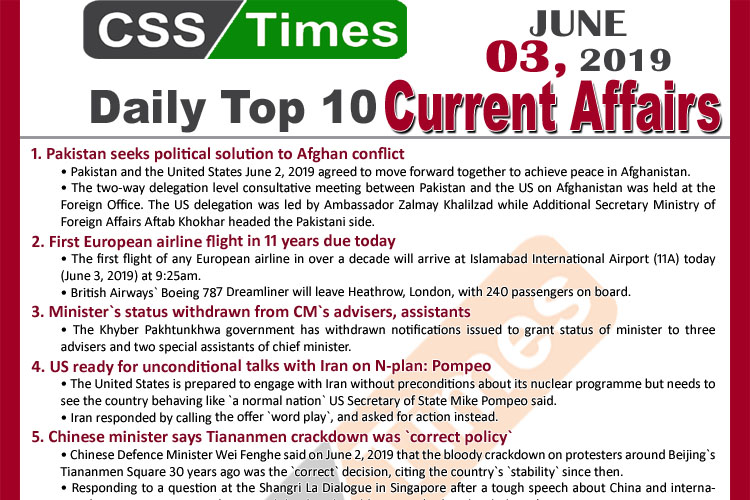 • Pakistan and the United States June 2, 2019 agreed to move forward together to achieve peace in Afghanistan.
• The two-way delegation level consultative meeting between Pakistan and the US on Afghanistan was held at the Foreign Office. The US delegation was led by Ambassador Zalmay Khalilzad while Additional Secretary Ministry of Foreign Affairs Aftab Khokhar headed the Pakistani side.
• The US delegation comprised representatives of Defence and State Departments while senior officials from ministries of defence and foreign affairs participated for Pakistan.
• During the meeting, issues of mutual interest including bilateral ties, regional peace situation, and Afghan peace process came under discussion, said a foreign ministry statement.
• Additional Secretary Aftab Khokhar said that Pakistan will continue playing its mediatory role in establishment of peace in the region, including Afghan peace process, as part of the vision of Prime Minister Imran Khan.
• “Pakistan has advised all the sides to move towards political resolution of the issue in order to end the decades’ long conflict in the region,” the statement said.

• The first flight of any European airline in over a decade will arrive at Islamabad International Airport (11A) today (June 3, 2019) at 9:25am.
• British Airways` Boeing 787 Dreamliner will leave Heathrow, London, with 240 passengers on board.
• The same aircraft will depart for Heathrow as BA-260 at 11:10am with passengers on board.

4. US ready for unconditional talks with Iran on N-plan: Pompeo

• The United States is prepared to engage with Iran without preconditions about its nuclear programme but needs to see the country behaving like `a normal nation` US Secretary of State Mike Pompeo said.
• Iran responded by calling the offer `word play`, and asked for action instead.
• Iranian President Hassan Rouhani suggested on Saturday that Iran might be willing to hold talks if Washington showed it respect, but said Tehran would not be pressured into talks.
• Pompeo, in an apparent softening of his previous stance, said when asked about Rouhani`s remarks: `We are prepared to engagein a conversation with no preconditions, we are ready to sit down.

• Chinese Defence Minister Wei Fenghe said on June 2, 2019 that the bloody crackdown on protesters around Beijing`s Tiananmen Square 30 years ago was the `correct` decision, citing the country`s `stability` since then.
• Responding to a question at the Shangri La Dialogue in Singapore after a tough speech about China and international security cooperation, he termed the decades-old protests `political turbulence`.
• It is rare for Chinese government officials to acknowledge the events of June 4, 1989; references to it are heavily censored in China.
• `Everybody is concerned about Tiananmen after 30 years,` Wei said on Sunday.
• `Throughout the 30 years, China under the Communist Party has undergone many changes do you think the government was wrong with the handling of June Fourth? There was a conclusion to that incident. The government was decisive in stopping the turbulence.

• Turkey voiced support for mediation talks between Venezuela’s Maduro government and the country’s opposition.
• “Turkey welcomes the talks held in Oslo between the Maduro Government and Venezuelan opposition with the mediation of the Norwegian Government,” Hami Aksoy, Foreign Ministry spokesman, said in a statement. “Turkey supports initiatives aiming for a political solution that can be accepted by all parties to the deadlock in Venezuela and does not believe that any method excluding dialogue and compromise will bring a lasting solution,” he added.

7. Iran warns any clash in Gulf would push oil prices above $100

• US military vessels in the Gulf are within range of Iranian missiles, a top military aide to Iran’s Supreme Leader Ayatollah Ali Khamenei said on June 2, 2019, warning any clash between the two countries would push oil prices above $100 a barrel.
• Iran and the United States have been drawn into starker confrontation in the past month, a year after Washington pulled out of a deal between Iran and global powers to curb Tehran’s nuclear programme in return for lifting international sanctions.
• Washington re-imposed sanctions last year and ratcheted them up in May, ordering all countries to halt imports of Iranian oil. In recent weeks it has also hinted at military confrontation, saying it was sending extra forces to the Middle East to respond to an Iranian threat. Yahya Rahim Safavi, a top military aide to Khamenei, said: “The Americans are fully aware that their military forces (in the region) are within the Iran’s missile range and all US and foreigners’ navy in the Persian Gulf are within the range of land-to-sea missiles of the Revolutionary Guards.”

• Turkey and Cuba agreed to establish a study group to work on various vaccines, including for cancer, and medical drugs.
• Turkish Health Minister Fahrettin Koca met his Cuban counterpart Angel Portal Miranda last week at an international health conference in Geneva, the statement said.
• It added that a senior Cuban delegation would soon arrive in Turkey to meet with Turkish health officials.
• Also, separate protocols on health cooperation were signed with Indonesia and Kyrgyzstan in conjunction with a 2014 collaboration agreement, it added.

• Bangladesh piled up their highest one-day International total and bowled superbly to upset South Africa by 21 runs in the Cricket World Cup at The Oval on June 3, 2019.
• It was a major scalp for Bangladesh, underlining their reputation as dangerous outsiders at the tournament, while South Africa slumped to their second successive defeat.
• Mushfiqur Rahim and Shakib Al Hasan put together a record partnership as Bangladesh made 330 for six after being put into bat. That meant South Africa needed to pull off the highest run chase in World Cup history, but they ended on 309 for eight and with their next game against India on Wednesday, their chances of making the semi-finals are already under threat.

• Liverpool ended an incredible season by winning Europe’s biggest prize after beating Tottenham Hotspur 2-0 in all-English Champions League final, earning sweet redemption after agonisingly missing out on the Premier League title.
• Mohamed Salah scored the second-quickest goal in a Champions League final by converting from the penalty spot in the second minute while Divock Origi sealed victory in the 87th after Liverpool had survived some heavy late pressure from Spurs.
• Tottenham, in their first European Cup final, kept their heads after the early setback and came to life when semi-final hat-trick hero Lucas Moura was brought on but, with Harry Kane lacking sharpness, another European comeback was beyond them. 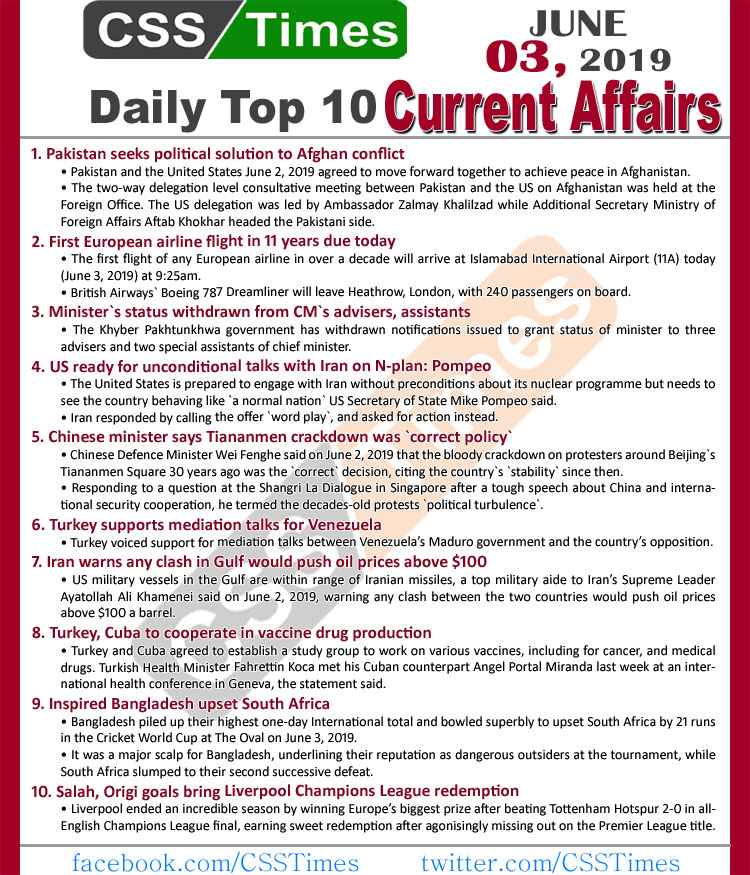