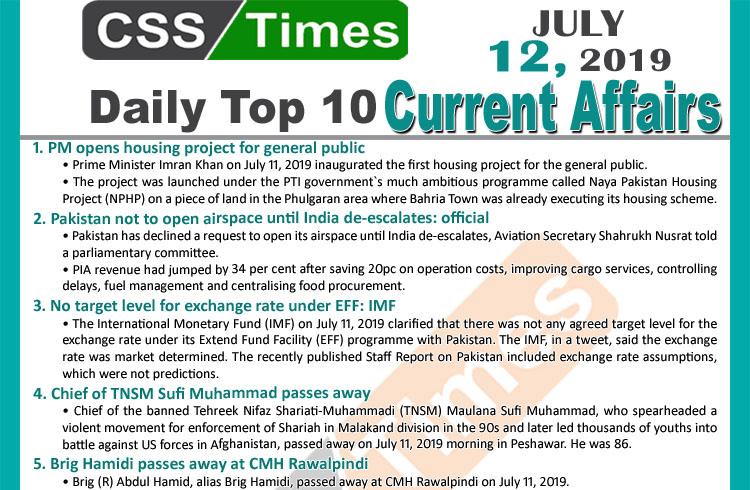 • Prime Minister Imran Khan on July 11, 2019 inaugurated the first housing project for the general public.
• The project was launched under the PTI government`s much ambitious programme called Naya Pakistan Housing Project (NPHP) on a piece of land in the Phulgaran area where Bahria Town was already executing its housing scheme.
• The land for the project was provided by Bahria Town on very nominal rates.
• Under the project, 18,500 housing units/apartments will be constructed and given to the low-income group on a mortgage basis.

2. Pakistan not to open airspace until India deescalates: official

3. No target level for exchange rate under EFF: IMF

• Chief of the banned Tehreek Nifaz Shariati-Muhammadi (TNSM) Maulana Sufi Muhammad, who spearheaded a violent movement for enforcement of Shariah in Malakand division in the 90s and later led thousands of youths into battle against US forces in Afghanistan, passed away on July 11, 2019 morning in Peshawar. He was 86.
• His body was shifted to Lal Qila, Maidan, and was buried in his ancestral graveyard.
• A former member of the Jamaat-i-Islami, Maulana Sufi Muhammad founded the TNSM in 1988, along with some elders of Maidan in Lower Dir district, and the group`s aim was to enforce Shariah in Malakand division, Hazara and Kohistan.
• The Maulana launched a civil disobedience movement in 1994 which was forcibly suppressed by the then government of the Pakistan Peoples Party.

• Veteran journalist Mohammad Omer Qambrani passed away after a long illness on July 10, 2019. He was 81.
• He is survived by his wife, a son and three daughters.
• Mr Qambrani began his career at weekly Jamalistan published from Jaffarabad. It was shut down during Ayub Khan`s martial law.

• Iranian boats tried to impede a British oil tanker near the Gulf – before being driven off by a Royal Navy ship.
• HMS Montrose, a British frigate shadowing the BP-owned tanker, was forced to move between the three boats and the tanker, a spokesman said.
• He described the Iranians’ actions as “contrary to international law”.
• Iran had threatened to retaliate for the seizure of one of its own tankers, but denied any attempted seizure.
• Last week, British Royal Marines helped the authorities in Gibraltar seize an Iranian tanker because of evidence it was carrying oil to Syria in breach of EU sanctions.

8. US peace envoy for Afghanistan in Beijing

• The US peace envoy to Afghanistan is in Beijing for a previously scheduled meeting, an American Embassy spokesman said on July 11, 2019, as indications grew of a new momentum in efforts to end Afghanistan`s 18-year war and push by China to boost its influence in the region.
• The spokesman gave no further details about the visit by Zalmay Khalilzad, but it comes just days after he said that for the first time he can report `substantive` progress on all four issues key to a peace agreement.
• The spokesman spoke on routine condition of anonymity.

• A European Vega rocket has been lost shortly after blast off, the commercial space company Arianespace says.
• It is the first time in 15 launches that a Vega rocket has failed.
• The rocket had been carrying a military satellite for the United Arab Emirates when it took off from the European spaceport in French Guiana on July 10, 2019 evening.
• It is believed to have crashed into the Atlantic Ocean north of the space centre.
• Luce Fabreguettes, Arianespace’s executive vice president of missions, said a “major anomaly” had occurred about two minutes after liftoff at the time of the second stage ignition.

• England beat Australia by eight wickets to go into the Cricket World Cup final where they will play New Zealand on July 14, 2019 at Lord’s.
• The defending champions had teetered to 14 for three after deciding to bat first, with England exploiting the early seam movement on offer at Edgbaston, before Jofra Archer bloodied Alex Carey’s jaw with a vicious bumper.
• Carey went on to put on 103 alongside Smith, who rarely thrilled in his 85 from 119 balls but his tournament best innings helped Australia to 223 all out in 49 overs as they bid to extend their unbeaten sequence in World Cup semi-finals. 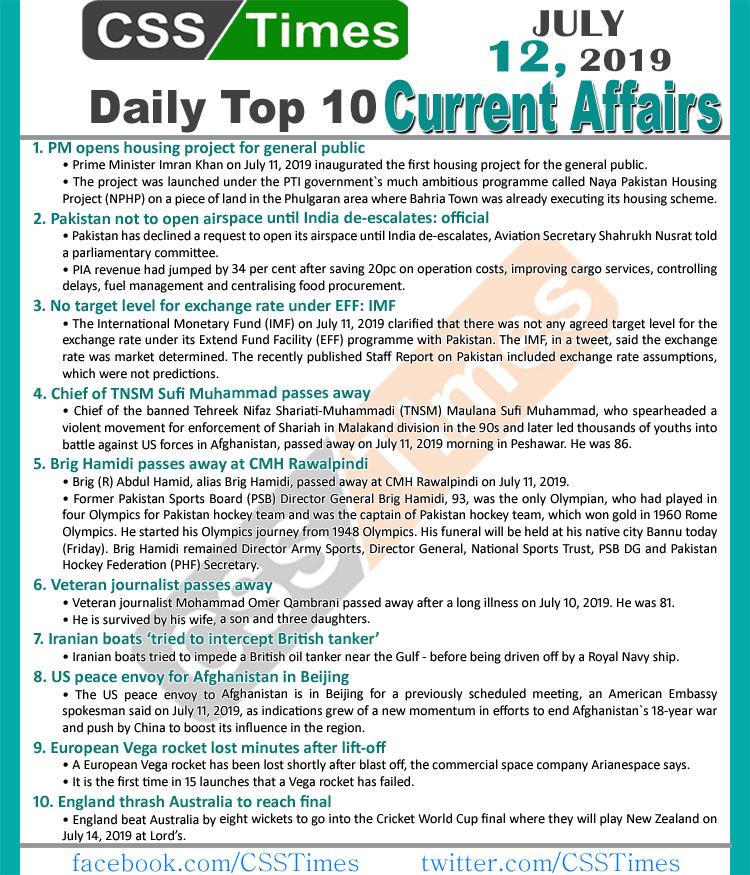