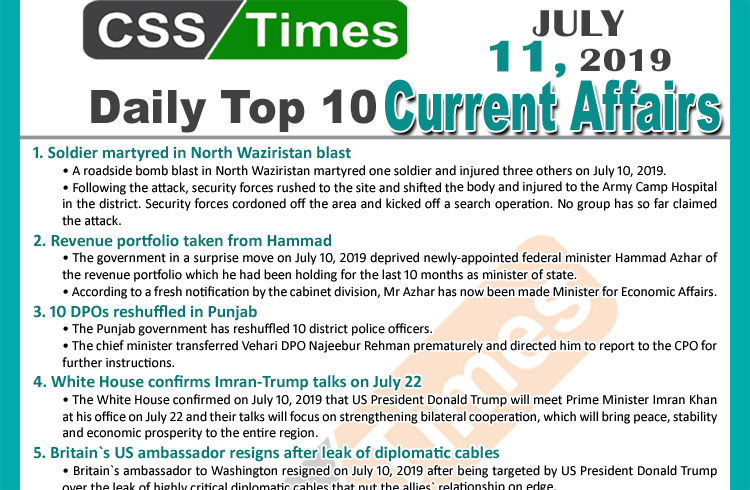 • A roadside bomb blast in North Waziristan martyred one soldier and injured three others on July 10, 2019.
• Some unknown terrorists attacked a military vehicle with an improvised explosive device which was planted on the roadside in Khar Kamar area of North Waziristan, a tribal district in Khyber Pakhtunkhwa. The security personnel came under the attack when they were patrolling in the area.
• Following the attack, security forces rushed to the site and shifted the body and injured to the Army Camp Hospital in the district. Security forces cordoned off the area and kicked off a search operation. No group has so far claimed the attack.

• The government in a surprise move on July 10, 2019 deprived newly-appointed federal minister Hammad Azhar of the revenue portfolio which he had been holding for the last 10 months as minister of state.
• The portfolio was taken back only a day after he had been made fullfledged minister as a reward for his performance during the last month`s budget session of the National Assembly.
• According to a fresh notification by the cabinet division, Mr Azhar has now been made Minister for Economic Affairs.
• According to the latest situation, Mr Azhar has become Minister for Economic Affairs and Mr Shaikh holds the portfolio of Adviser to Prime Minister on Finance and Revenue with the status of a federal minister.

• The Punjab government has reshuffled 10 district police officers.
• The transfer/postings were made on the recommendations of IGP Arif Nawaz Khan who had dispatched a list of the officers to Chief Minister Usman Buzdar. The CM called the candidates to his office for interview before giving them new assignments.
• The chief minister transferred Vehari DPO Najeebur Rehman prematurely and directed him to report to the CPO for further instructions.
• Earlier, Mr Rehman had served as Narowal DPO and Vehari was his second district from where he has been transferred five months after his appointment.
• The CM transferred and appointed 29th common police officer Gujranwala SSP Saqib Sultan as Vehari DPO. It`s the first assignment of Mr Sultan as DPO of any district in Punjab and he is serving in BS-19. He had largely served out of Punjab and recently completed the Senior Management Course for promotion to the next grade.

• The White House confirmed on July 10, 2019 that US President Donald Trump will meet Prime Minister Imran Khan at his office on July 22 and their talks will focus on strengthening bilateral cooperation, which will bring peace, stability and economic prosperity to the entire region.
• US State Department spokesperson Morgan Ortagus told journalists that the White House had not yet confirmed the visit, a statement that caused wild speculations about the nature and scope of the trip.
• `President Donald J. Trump will welcome Prime Minister Imran Khan of the Islamic Republic of Pakistan to the White House on July 22, 2019, said a statement issued by the office of the White House Press Secretary.

5. Britain`s US ambassador resigns after leak of diplomatic cables

• Britain`s ambassador to Washington resigned on July 10, 2019 after being targeted by US President Donald Trump over the leak of highly critical diplomatic cables that put the allies` relationship on edge.
• Outgoing Prime Minister Theresa May had offered her support to Kim Darroch after it was revealed he described the Trump administration as `inept` But the man tipped to replace her in Downing Street this month, former foreign secretary Boris Johnson, declined to back the diplomat, instead emphasising the need to maintain strong ties with the US.
• In a series of confidential cables revealed by a British newspaper at the weekend, Darroch called the Trump administration `uniquely dysfunctional` and said the president was `radiating insecurity`.

• A 210,000-year-old skull has been identified as the earliest modern human remains found outside Africa, putting the clock back on mankind`s arrival in Europe by more than 150,000 years.
• In a startling discovery that changes our understanding of how modern man populated Eurasia, the findings support the idea that Homo sapiens made several, sometimes unsuccessful migrations from Africa over tens of thousands of years.
• Southeast Europe has long been considered a major transport corridor for modern humans from Africa. But until now the earliest evidence of Homo sapiens on the continent dated back only around 50,000 years.

• NASA scientists have developed a new technique for analyzing satellite data that can reveal subtle structural changes, according to a release of NASA’s Jet Propulsion Laboratory (JPL).
• These changes, which are so subtle that are not visible to the naked eye, may indicate a bridge is deteriorating, said JPL.
• After the collapse of the Morandi Bridge near Genoa, Italy, in August 2018, which killed dozens of people, a team of scientists from NASA, the University of Bath in England and the Italian Space Agency used synthetic aperture radar measurements from several different satellites and reference points to map structural changes to the bridge — from 2003 to the time of its collapse.
• Using a new process, they were able to detect millimeter-size changes to the bridge over time that would not have been detected by the standard processing approaches applied to spaceborne synthetic aperture radar observations.

8. Bloodhound car to run at high speed in October

• The Bloodhound supersonic car will conduct high-speed trials in October.
• The team behind the rejuvenated project says it now has the financing to go test the vehicle at 500-600mph.
• This should provide the engineering data required to send Bloodhound through the sound barrier and to smash the existing land speed record (763mph; 1,228km/h) in 2020. The trials will be conducted on Hakskeen Pan, a dried-out lakebed in Northern Cape, South Africa.
• The UK-led venture was rescued from administration by Yorkshire entrepreneur Ian Warhurst in December.

• New Zealand reached the World Cup final as they produced the bowling performance of the tournament to edge out a crestfallen India by 18 runs in a sensational match at Old Trafford.
• India, chasing 240 to win, were reduced to 24-4 and 92-6 before Ravindra Jadeja and MS Dhoni produced a 116-run partnership to drag the 2011 winners back in contention. Jadeja in particular was superb but, with 37 runs needed from the final 18 balls, Jadeja hit Trent Boult high into the air and to Black Caps captain Kane Williamson to fall for 77.

• The Chitral polo team thrashed the Gilgit-Baltistan team in a thrilling finale and clinched the coveted trophy on the last day of the three-day annual Shandur Polo Festival in Chitral.
• Besides exciting polo matches, the mega event also showcased traditional, cultural and adventurous activities including fireworks, music and dances at evening at the world highest polo ground at Shandur. 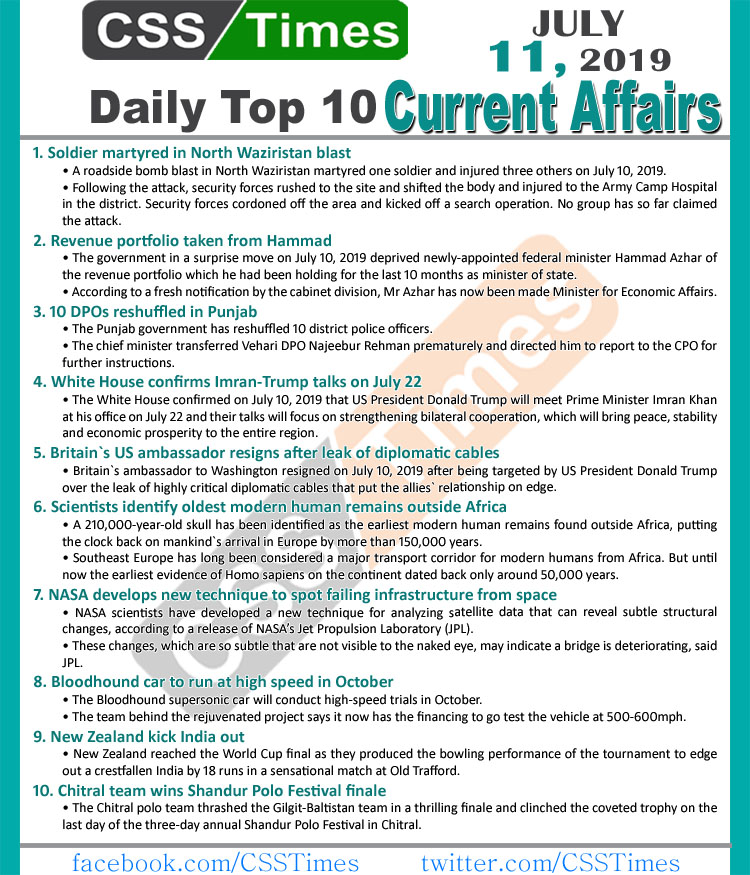