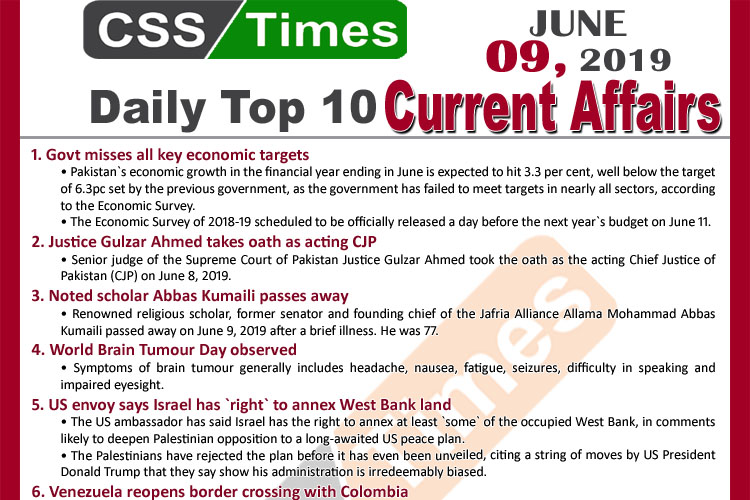 • Pakistan`s economic growth in the financial year ending in June is expected to hit 3.3 per cent, well below the target of 6.3pc set by the previous government, as the government has failed to meet targets in nearly all sectors, according to the Economic Survey.
• The Economic Survey of 2018-19 is scheduled to be officially released a day before the next year`s budget on June 11.
• It indicates that livestock is the only sector whose growth went slightly above the official target while all other sectors performed below expectation.
• A sharp decline was witnessed in the industrial sector that registered a growth of 1.4pc against the target of 7.6pc despite the fact that power generation witnessed an increase as several power plants and other power sector projects were completed.
• Also, the manufacturing sector slid by 0.3pc and the large scale manufacturing (LSM) showed a negative growth of 2pc against the target 8.1pc.
• The service sector grew by 4.7pc against the target of 6.5pc, while the construction sector achieved the growth of 7.6pc against a 10pc target.

• Renowned religious scholar, former senator and founding chief of the Jafria Alliance Allama Mohammad Abbas Kumaili passed away on June 9, 2019 after a brief illness. He was 77.
• Allama Kumaili was elected a member of the Senate from the platform of the Muttahida Qaumi Movement in 2003. He remained a member of the upper house till 2009.

• Symptoms of brain tumour generally includes headache, nausea, fatigue, seizures, difficulty in speaking and impaired eyesight.
• Specifically a pituitary tumour affects one’s hormones and eyesight. CT Scans and MRIs are used to diagnose brain tumour. There are no specific reasons for brain tumour development, but we can identify some risk elements such as certain inherited and sporadic genetic abnormalities and exposure to high levels of radiation.
• A tumour is an abnormal growth of tissue of any body part which escapes the control of body systems. Brain tumour can cause different adverse effects on human body depending on its types. Some tumours grow quickly whereas some take longer time to grow big, but in any case it should be treated properly. Gliomas which are the commonest brain tumours are categorised into four grades.

• The US ambassador has said Israel has the right to annex at least `some` of the occupied West Bank, in comments likely to deepen Palestinian opposition to a long-awaited US peace plan.
• The Palestinians have rejected the plan before it has even been unveiled, citing a string of moves by US President Donald Trump that they say show his administration is irredeemably biased.
• They are likely to see the latest comments by US ambassador to Israel David Friedman as new nail in the coffin of a peace process that is already on life support.
• In the interview published by the New York Times on June 8, 2019, Friedman said that some degree of annexation of the West Bank would be legitimate.

• Thousands crossed into Colombia on Saturday to buy food and medicine after Venezuela`s President Nicols Maduro reopened a border that had been shut down for the past four months.
• Long lines of Venezuelans stood at two international bridges near the city of Ccuta waiting to have their documents checked by Colombian officials, with some carrying children on their shoulders. Venezuelan border guards dressed in green uniforms helped to control the crowd.
• The South American nation`s socialist government ordered the borders with Aruba, Bonaire, Curacao, Brazil and Colombia closed in February as the opposition tried to deliver food and medical supplies into the country.

• The United States has imposed new sanctions on Iran that target the country’s petrochemical industry, including its largest petrochemical holding group, over Iran’s financial support for the Islamic Revolutionary Guard Corps (IRGC), the Treasury Department said. Meanwhile, Iran also rejected the idea of having wider international talks about its nuclear and military ambitions.
• Washington is pressuring Iran over its nuclear and ballistic missile programme, and for waging proxy wars in other Middle Eastern countries. The new measures follow a round of sanctions imposed last month that targeted Iran’s export revenues from industrial metals.
• Tensions between the two countries worsened last month when the administration of US President Donald Trump ordered the deployment of an aircraft carrier strike group, bombers and Patriot missiles to the Middle East, citing intelligence about possible Iranian preparations to attack US forces or interests.

8. US starts withdrawing Turkey from F-35 programme over Russia deal

• The US Pentagon has notified Turkey that it is cancelling its purchase of F-35 fighter jets if the Turkish government goes ahead with the purchase of a Russia’s S-400 missile defence system.
• Acting US Defense Secretary Patrick Shanahan has sent a letter notifying Turkey that all training of Turkish pilots will also end as of July 31. And all Turkish personnel connected to the F-35 programme must leave the country by the end of that month.
• Shanahan’s letter explicitly states there will be “no new F-35 training”. It says there were 34 students scheduled for F-35 training later this year.

• It was a day of one-sided matches in the cricket World Cup as England cruised to victory against Bangladesh and New Zealand made short work of Afghanistan on June 9, 2019.
• The first match of the day was important for England`s chances in the tournament because they had lost their last match against Pakistan.
• In the other match played at Taunton, New Zealand restricted Afghanistan to a modest total of 172, which their captain helped overhaul by making a disciplined 79 not out.

• Ash Barty decided to take a break from tennis in 2014 to play cricket. After almost two years away, the Australian returned to the tour, and that career choice paid off in a big way June 9, 2019 with her first Grand Slam title.
• The No. 8-seeded Barty took control right at the start of the French Open final and never really let go, beating unseeded 19-year-old Marketa Vondrousova of the Czech Republic 6-1, 6-3.
• Pretty close to it, particularly at the start. She raced to a 4-0 lead and then held on, showing that she learned her lesson after blowing a 5-0 edge in the opening set of her quarterfinal victory a day earlier over another unseeded teenager, 17-year-old American Amanda Anisimova. 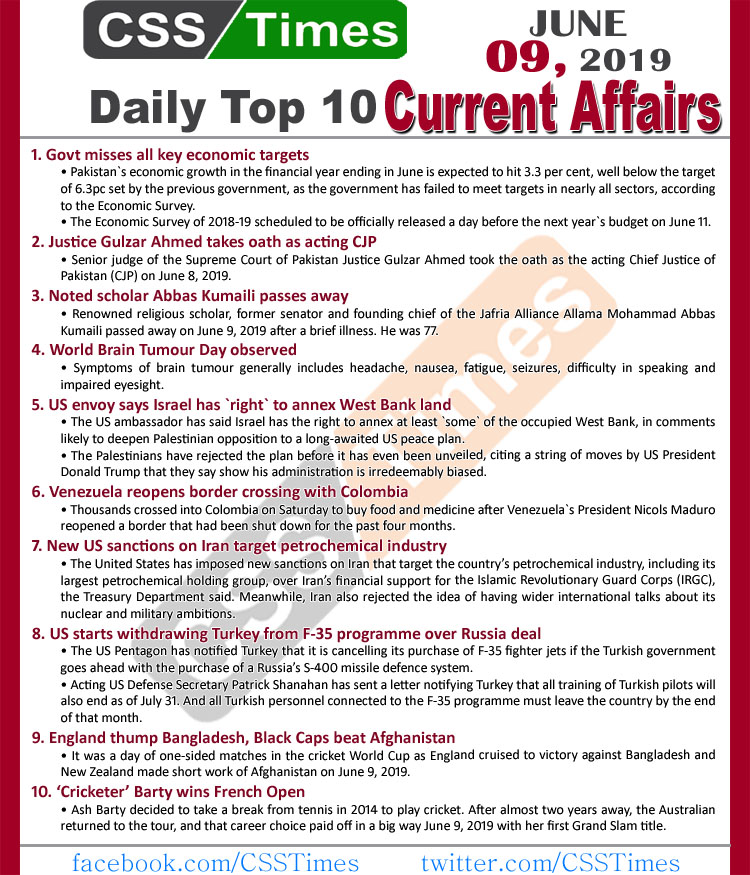