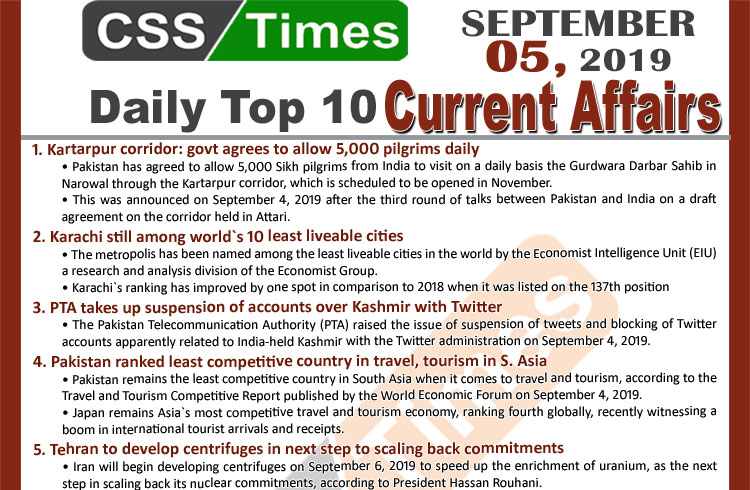 • Pakistan has agreed to allow 5,000 Sikh pilgrims from India to visit on a daily basis the Gurdwara Darbar Sahib in Narowal through the Kartarpur corridor, which is scheduled to be opened in November.
• This was announced on September 4, 2019 after the third round of talks between Pakistan and India on a draft agreement on the corridor held in Attari.
• Dr Mohammad Faisal, the Foreign Office spokesperson and Director General for South Asia, led the Pakistani delegation while the Indian team was headed by S.C.L Das, a joint secretary in the home affairs department.
• After the meeting, Dr Faisal told reporters at the Wagah border that the talks were held in a positive environment despite prevailing tensions between the two countries over the situation in occupied Kashmir.
• `It was a productive meeting. We agreed on many things… We have overcome many obstacles as per the prime minister`s initiative and we are inching closer to opening the corridor in November,` he said.
• `There are two to three sticking points and we are hopeful they will also be sorted out as India needs to show a little more flexibility,` Dr Faisal said, adding that Indian officials had been invited for the final round of talks on the remaining issues.

• The metropolis has been named among the least liveable cities in the world by the Economist Intelligence Unit (EIU) a research and analysis division of the Economist Group.
• Each year, the EIU gives 140 cities score out of 100 ona range of factors, such as living standards, crime, transport infrastructure, access to education and healthcare, as well as political and economic stability.
• This year, Karachi has been ranked 136th on the list the fifth least liveable city in the world only managing to fare better than Damascus in Syria, Lagos in Nigeria, Dhaka in Bangladesh and Tripoli in Libya. Other countries in the list of the 10 least liveable cities include Caracas in Venezuela, Algiers in Algeria, Douala in Cameroon, Harare in Zimbabwe and Port Moresby in Papua New Guinea.
• Ranked on 136th position, Karachi`s overall rating out of 100, which EIU stated was ideal, was 40.9, its stability rating was 20, healthcare 45.8, culture and environment 38.7, education 66.7 and infrastructure 51.8.
• Karachi`s ranking has improved by one spot in comparison to 2018 when it was listed on the 137th position

3. PTA takes up suspension of accounts over Kashmir with Twitter

• The Pakistan Telecommunication Authority (PTA) raised the issue of suspension of tweets and blocking of Twitter accounts apparently related to India-held Kashmir with the Twitter administration on September 4, 2019.
• The telecom sector regulator has also asked the users of the microblogging site to register their concerns about the suspension of their tweets or blocking of their accounts at the following email address: content-complaint@pta.gov.pk.
• The PTA has said a total of 333 handles have been suspended for posting tweets regarding the situation in held Kashmir.

• Pakistan remains the least competitive country in South Asia when it comes to travel and tourism, according to the Travel and Tourism Competitive Report published by the World Economic Forum on September 4, 2019.
• The report placed Pakistan at the bottom of the Asia-Pacific Travel and Tourism (T&T) Competitive Index 2019 rankings. Pakistan ranked 121 this year out of 140 countries against 124 in 2017.
• The report emphasised that Pakistan still required substantial improvement in competitiveness to move up in rank and out of the bottom quartile.
• In its pillar snapshot for Asia-Pacific region, the report said Pakistan was the most improved country in terms of human resources and labour market, whereas Singapore was the top scorer in this area.
• Japan remains Asia`s most competitive travel and tourism economy, ranking fourth globally, recently witnessing a boom in international tourist arrivals and receipts.

5. Tehran to develop centrifuges in next step to scaling back commitments

• Iran will begin developing centrifuges on September 6, 2019 to speed up the enrichment of uranium, as the next step in scaling back its nuclear commitments, according to President Hassan Rouhani.
• Under its 2015 nuclear agreement with world powers, Iran was allowed to keep restricted quantities of first-generation centrifuges at two nuclear plants.
• But the successful development of more advanced centrifuges would enable it to produce material for a potential nuclear bomb several times faster.

• Indian Prime Minister Narendra Modi praised his `close friend` Russian President Vladimir Putin on September 4, 2019 as the pair said they would work to boost military, trade and energy ties.
• The leaders met on the first day of Russia`s economic forum in the Pacific coast city of Vladivostok, an annual event since 2015 as Moscow looks to bolster relations with Asia amid tensions with the West.
• `I`m very grateful to my close friend Vladimir Putin for this opportunity,` Modi said at a press conference following talks and a tour of a naval shipyard.
• `We have reached a new stage in collaboration,` he said, adding that the pair discussed `unprecedented` mutual investment in oil and gas industries.
• A joint statement called for cooperation in military and technological spheres, with the possibility of creating joint ventures in India to develop and manufacture civilian aircraft.

• The US Defence Department said it was freeing up $3.6 billion in funds budgeted for other projects to build a wall on the Mexican border as ordered by President Donald Trump.
• Six weeks after being confirmed by Congress, Defence Secretary Mike Esper has signed off on the diversion of funds from 127 `deferred military projects` both inside and outside the country, said Pentagon spokesman Jonathan Hoffmann.
• In February Trump, frustrated that Congress would not provide funding for the18-foot (5.5-metre) barrier, declared a `national emergency` at the border in order to obtain $6.6 billion from other budgeted accounts for wall construction aimed at stemming the flow of undocumented migrants from Mexico and Central America.

• No cash, no cards, no wallet, and no smartphones: China`s shoppers are increasingly purchasing goods with just a turn of their heads as the country embraces facial payment technology.
• China`s mobile payment infrastructure is one of the most advanced in the world, but the new systems which require only face recognition being rolled out nationwide could make even QR codes seem old-fashioned.
• Customers simply make a purchase by posing in front of point-of-sale (POS) machines equipped with cameras, after linking an image of their face to a digital payment system or bank account.

• The lower house of British parliament voted on September 4, 2019 to prevent Prime Minister Boris Johnson taking Britain out of the European Union without a deal, but he proposed a snap election on Oct. 15, just weeks before Brexit, to free his hands.
• After wresting control of the parliamentary agenda from Johnson, the House of Commons backed a bill that would force the government to request a three-month Brexit delay from Brussels rather than leave without a divorce agreement.
• But Brussels warned Boris Johnson against the idea he could strike a new Brexit deal with EU leaders before Britain crashes out of the bloc next month.
• EU officials met a British delegation for `technical talks`, but stressed once again that London has come up with nothing that might convince them to reopen the withdrawal agreement.
• An alliance of opposition lawmakers and rebels from Johnson`s Conservative Party voted 329-300 and then 327-299 forthe bill in the second and third readings.
• The bill now passes to the upper house of parliament, the House of Lords.

10. `Misbah to be solely responsible for team`s selection, performance`

• Misbah-ulHaq, after being handed the dual role of head coach-cum-chief selector, will be solely responsible for national team`s selection as well as its performance, Pakistan Cricket Board (PCB) chief executive Wasim Khan said on September 4, 2019.
• The dual role a totally new experiment in Pakistan cricket has been given to Misbah who was also named head coach. Waqar Younis, another former skipper and fast bowling icon, was chosen as the team`s bowling coach. `Both Misbah and Waqar have been appointed for a three-year term, Wasim said at the press conference alongside Misbah. 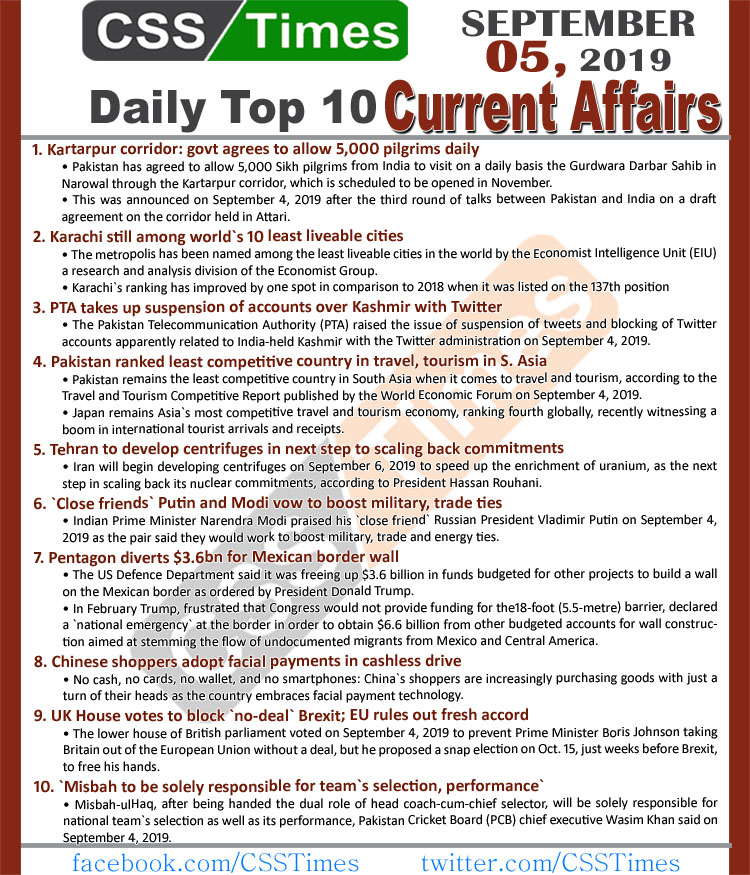