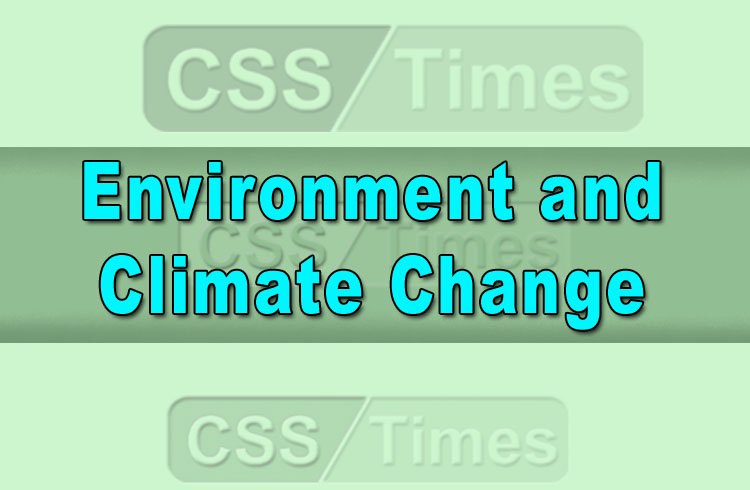 Before the Industrial Revolution, the amount of carbon dioxide and other greenhouse gases released into the atmosphere was in a rough balance with what could be stored on Earth.

Since the mid-1700s, humans have been emitting additional large amounts of green house gases from burning more fossil fuels to run our cars, trucks, factories, planes and power plants.

Scientists expect that in the absence of effective policies to reduce greenhouse gas pollution, the global average temperature will increase another 2 degrees by 2100.

Environmental history is a rather new discipline that came into being during the 1960’s and 1970’s. It was a direct consequence of the growing awareness of worldwide environmental problems such as pollution of water and air by pesticides, depletion of the ozone layer and the enhanced greenhouse effect caused by human activity.

Environmental issues are defined as problems with the planet’s systems (air, water, soil, etc.) that have developed as a result of human interference or mistreatment of the planet.

Global warming is the rise in temperature of the earth’s atmosphere. Average temperatures around the world have risen by 0.75°C (1.4°F) over the last 100 years about two thirds of this increase has occurred since 1975. In the past, when the Earth experienced increases in temperature it was the result of natural causes but today it is being caused by the accumulation of greenhouse gases in the atmosphere produced by human activities.

Greenhouse gases are made out of:

The natural greenhouse effect maintains the Earth’s temperature at a safe level making it possible for humans and many other lifeforms to exist. However, since the Industrial Revolution human activities have significantly enhanced the greenhouse effect causing the Earth’s average temperature to rise by almost 1°C. This is creating the global warming we see today. To put this increase in perspective it is important to understand that during the last ice age, a period of massive climate change, the average temperature change around the globe was only about 5°C

Deforestation has become a massive undertaking by humans and transforming forests into farms has a significant number of impacts as far as greenhouse gas emissions are concerned. For centuries, people have burned and cut down forests to clear land for agriculture. This has a double effect on the atmosphere both emiting carbon dioxide into the atmosphere and simultaneously reducing the number of trees that can remove carbon dioxide from the air.

The Kyoto Protocol is a product of the third Conference of the Parties to the United Nations Framework Convention on Climate Change. This conference took place in Kyoto, Japan, and the agreement was first signed on December 11, 1997.

Countries that ratify Kyoto protocol commit to reducing their emissions of carbon dioxide and five other greenhouse gases (GHG), or engaging in emissions trading if they maintain or increase emissions of these gases.

The Goal: Reduction of 4 Greenhouse Gases

The Kyoto Protocol’s main goal is to reduce the presence of 4 harmful greenhouse gases (GHG’s):

These gases belong into two groups, both of which are being targeted by the protocol:

The goal is to reduce emissions by 5.2%, compared to 1990 levels. That doesn’t sound unreasonable to us, especially considering that shipping and international aviation emissions are not included in that percentage.
The Kyoto Protocol was fully implemented on 16, 2005 with the ratification of Russia which resulted in the approval of countries having total emissions up to 60%. However, the United States of America which produces more than 25% of Worldwide Greenhouse Gases emissions didn’t ratify this protocol along with Australia which also opted-out.

The Copenhagen Agreement is a document that delegates at the 15th session of the Conference of Parties (COP 15) to the United Nations Framework Convention on Climate Change agreed to “take note of” at the final plenary on 18 December 2009.

Pakistan is considered among countries that suffer extreme weather conditions. Pakistan was one of five nations that were badly affected by the climate change. The Pakistan Economic Survey has reported that during 2010-2012 floods more than 3,000 people were killed and resulted in loss of $16 billion. Thousands of people lost their lives due to Karachi heat wave, Chitral floods and drought in Thar in 2015. Furthermore, with rise in temperature and mangrove depletion across coastal line, the National Institute of Oceanography has warned that there is danger that Karachi could drown in next 35-45 years due to climate change.