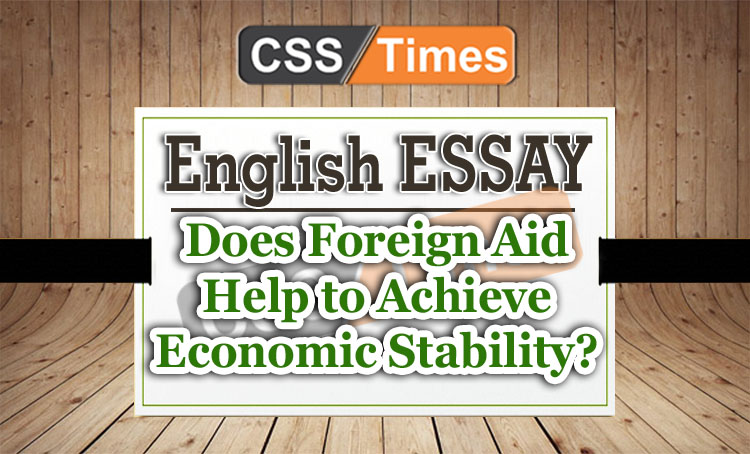 Foreign aid is defined as the voluntary transfer of resources from one country to another country. This transfer includes any flow of capital to developing countries. A developing country usually does not have a robust industrial base and is characterized by a low Human Development Index (HDI).

Foreign aid can be in the form of a loan or a grant. It may be in either a soft or hard loan. This distinction means that if repayment of the aid requires foreign currency, then it is a hard loan. If it is in the home currency, then it’s a soft loan. The World Bank lends in hard loans, while the loans of its affiliates are soft loans.

The U.S. spends roughly $50.1B in foreign aid each year which is only 1.2% of the Federal government’s budget.

Who Gives Aid, and Who Receives It?

Historically most aid has been given as bilateral assistance directly from one country to another. Donors also provide aid indirectly as multilateral assistance, which pools resources together from many donors. The major multilateral institutions include the World Bank; the International Monetary Fund; the African, Asian, and Inter-American Development Banks, and various United Nations agencies such as the United Nations Development Programme.

Assistance given by a government directly to the government of another country is Bilateral Aid. It is when the capital flows from a developed nation to a developing nation. Strategic political considerations and humanitarian ones often direct Bilateral Aid. These are to assist in long-term projects to promote democracy, economic growth, stability, and development.

Multilateral Aid is assistance provided by many governments who pool funds to international organizations like the World Bank, United Nations and International Monetary Fund that are then used to reduce poverty in developing nations. Though this sector constitutes a minority of the US’s foreign aid, the nation’s contributions make up a significant percentage of the donor funds received by the organization.

Tied Aid is one of the types of foreign aid that must be spent in the country providing the aid (the donor country) or in a group of selected countries. A developed country will provide a bilateral loan or grant to a developing country, but mandate that the money be spent on goods or services produced in the selected country.

When the funds are used to finance a particular project, such as a school or a hospital, it is considered to be Project Aid.

Military aid is never altruistic. The U.S. gave about $15 billion in Military Aid in 2011. Military aid usually requires said nation to either buy arms or defense contracts directly from the USA or in other cases just simplifies the process by having the federal government just buy the arms itself and ship them over on military transport.

This is aid usually in the form of charity. For example, Médecins Sans Frontières (Doctors without Borders) is “is an international humanitarian non-governmental organization best known for its projects in war-torn regions and developing countries affected by endemic diseases”

Why do Donors Give Aid?

Donors have a variety of motivations for providing aid, only some of which are directly related to economic development. There is little question that foreign policy and political relationships are the most important determinants of aid flows. During the Cold War, both the United States and the Soviet Union used aid to vie for the support of developing countries with little regard as to whether the aid actually was used to support development.

Donors’ motives are explained below.

Political motivations have been a most important factor for aid -granting nations, especially for a major donor country like the United States. Aid flows to further the donor’s interests. The flow of funds tends to vary in accordance with the donor’s political assessment of changing international scenario rather than the relative need of potential recipients. The experience of other major donor countries like Japan, Great Britain and France has been similar to that of the United States. Most socialist aid, especially from the former Soviet Union, emanated from the same political and strategic motivations, but its form, contents and modalities were somewhat different. With the end of the cold war and the demise of the Soviet Union (and, indeed the whole second world) these political motivations are not persistent, rather intermittently show existence. For example, the Persian Gulf War of 1991 saw aid flows directed to friendly allied governments like Egypt and Turkey.

Moreover, in the 1990s, both bilateral and multilateral aid was being conditioned according to a recipient country’s willingness to promote free markets, open its economy and transform its politico-economic system according to the donor’s capitalistic and democratic principles.

In a broader political and strategic perspective, foreign aid programmes of the developed nations have a strong economic rationale. For instance Japan intends its aid to neighboring Asian countries to promote substantial private investments and trade expansion

Pakistan has also been one the major receivers of aid from the United States of America and is expecting to receive more than $7 hundred million in the coming year but the past experience shows that it has not improved our overall economic condition. Pouring of billions of American dollars into Pakistani economy particularly during the Zia and Musharraf regime did produce a positive effect for the time being but did not last long. This superficial positive trend soon vanished when the flow of dollars began to reduce.

The developed economies of the world testify that aid never gives stability and prosperity; it’s the indigenous reforms and generation of resources that makes a country economically viable. Turkey, South Korea, and even India are some of the examples that are developing at a very fast rate due to their inward-looking policy for economic development. It is also the responsibility of the donors to provide aid to the poor countries for the long-term welfare of the people and not for temporary relief because we need to make them ‘resource generators ‘and not ‘beggars’.

Foreign aid began to flow into Pakistan soon after the independence. During 1950s the flows of aid was very small. But in 1960s and 1970s, foreign aid remained an important source of capital for Pakistan. Pakistan was one of the largest aid recipient countries in Asia during this period Foreign aid is an important source of income in developing countries and carries potential to play a key role in promoting economic growth.1 The traditional literature on economic growth emphasises the positive role of foreign aid in the process of economic development. Foreign aid inflow influences the process of growth by reducing the saving-investment gap, increasing productivity and transferring the modern technology. However, in the neoclassical growth framework the benefits of foreign capital inflows are of temporary nature. Like many other developing countries, Pakistan has heavily relied on foreign borrowings to finance its economic development. This strategy increased its dependency on external resources. Pakistan has received around US$73.14 billion in the form of foreign aid from 1960 to 2002, but the benefits of this aid flows have not stretched to the whole society, which means that foreign aid has failed to improve the economic conditions in Pakistan. The literacy rate is still around 50 percent and other social indicators, such as employment, health and education etc., also do not present an encouraging picture. Saving rates have remained low, and the trade gap has widened. Foreign aid has not been utilised for development of the economy; rather aid has served the vested interests of influential people. During 1990s, the foreign loans at commercial rate of interest have exacerbated the foreign debt problem of the country. The overall situation depicted above cast doubts about the effectiveness of foreign aid as a tool for economic growth.

Foreign aid effectiveness is a very critical and unsettled issue at the theoretical and empirical level. Pakistan has historically been among the top recipients of US aid – since 1948, the US has sent more than £30bn in direct aid to the country. Pakistan has received about US$ 77.78 billion from 1960 to 2009, but its social indicators still seem to be very poor. Most of the foreign aid components diverted from development to non-development expenditures, have produced hardly any significant impact on economic growth. Based on theoretical literature we specify aid exports augmented neo-classical production function to examine aid-growth link. The model is estimated using ARDL approach to cointegration over the period 1972-2006 for Pakistan.

Result suggests that foreign aid neither at aggregate nor at disaggregate level influenced economic growth in Pakistan. The finding implies that foreign aid is not a blessing. Further the demerits of foreign aid that include but are not limited to; harsh covenants from donors that times even call for compromising the autonomy of the Nation, corruption within the government, fiscal imprudence and poor institutions turn foreign aid into a curse. Therefore, we can say that foreign aid is not a blessing but a curse for Pakistan. Other variables such as, domestic investment, foreign direct investment and exports exerts positive and significant impact on economic growth at the aggregate and disaggregate level.

The most important policy implication derived from the results is that to reduce dependency to foreign aid and to improve the growth prospects in the country the authorities may provide enabling environment for domestic investment, expand export oriented industries and encourage FDI inflows. Furthermore, Pakistan may focus on those external financing resources that are much stable, sustainable and have positive impacts on growth rather than depending on the volatile and unstable sources. Given the general characteristics of exports and FDI one can expect that these are more stable external resources relative to foreign aid. The two variables, i.e., exports and FDI have not only exerted positive impact on growth but also generate spillover effects. Hence, there is need to focus on these sectors.