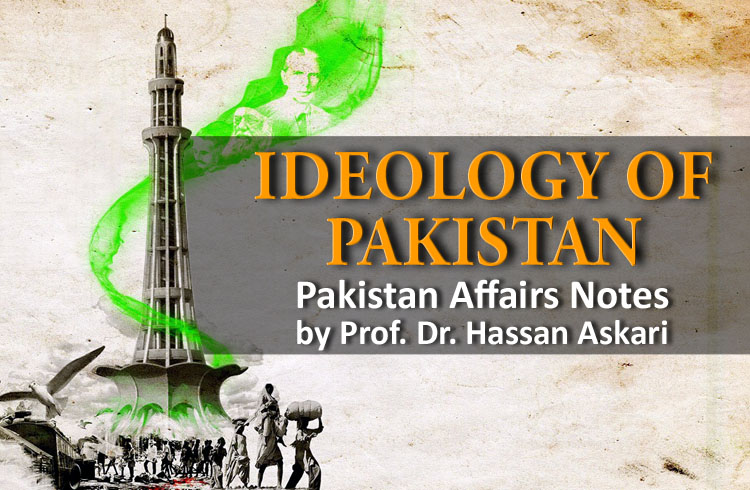 Ideology is a set of beliefs, values and ideals of a group and a nation. It is deeply ingrained in the social consciousness of the people. It is a set of principles, a framework of action and guidance system that gives order and meaning to life and human action.

Ideology emphasizes on some particular principles, ideals and blueprint for the future. It is a review of the existing political, social and economic arrangements that create consciousness based on its principles. It legitimizes or delegitimizes certain actions and philosophies. Ideology gives nation a direction and worldview and its implementation is the responsibility of the concerned people.

The ideology of Pakistan took shape through an evolutionary process. Historical experience provided the base; Allama Iqbal gave it a philosophical explanation; Quaid-i-Azam translated it into a political reality; and the Constituent Assembly of Pakistan, by passing Objectives Resolution in March 1949, gave it legal sanction. It was due to the realization of the Muslims of South Asia that they are different from the Hindus that they demanded separate electorates. However when they realized that their future in a ‘Democratic India’ dominated by Hindu majority was not safe, they changed their demand to a separate state.

The ideology of Pakistan stemmed from the instinct of the Muslim community of South Asia to maintain their individuality in the Hindu society. The Muslims believed that Islam and Hinduism are not only two religions, but are two social orders that produced two distinct cultures. There is no compatibility between the two. A deep study of the history of this land proves that the differences between Hindus and Muslims are not confined to the struggle for political supremacy but are also manifested in the clash of two social orders. Despite living together for more than one thousand years, they continue to develop different cultures and traditions. Their eating habits, music, architecture and script, all are poles apart.

The basis of the Muslim nationhood was neither territorial nor racial or linguistic or ethnic rather they were a nation because they belonged to the same faith, Islam. They demanded that the areas where they were in majority should be constituted into a sovereign state, wherein they could order their lives in accordance with the teachings of Holy Quran and Sunnah of Holy Prophet (PBUH).

Concept of Muslims as a Nation developed before the establishment of Pakistan. Pakistan was the product of this concept of nationhood rather than Pakistan creating a concept of nationhood. Retrospectively the Muslim nationalism emerged with the advent of Islam that introduced new principles pertinent to every sphere of life. It pledged the redemption of the humankind establishing a benign society based on Qur’anic teachings. The beginning of the Muslim nationalism in the Sub-Continent may be attributed to the first Indian who accepted Islam. The Arab traders had introduced the new religion, Islam, in the Indian coastal areas. Muhammad bin Qasim was the first Muslim invader who conquered some part of India and after that, Mahmud of Ghazna launched 17 attacks and opened the gate to preach Islam. The Muslim sufi (saints) like Ali Hejveri, Miran Hussain Zanjani etc. entered Sub-Continent. They, rejecting the vices in the Indian society, presented the pure practical picture of the teachings of Islam and got huge conversions. Qutub-ud-Din Aibuk permanently established Muslim dynasty in India that followed Sultanate and Mughal dynasties. Thus a strong Muslim community had emerged in India who had its own way of life, traditions, heroes, history and culture. Islam could not be absorbed in Hinduism. Deen-e-Ilahi, Bakhti movements, etc. created reaction amongst the Muslim ulama to preserve the pure Islamic character and save it from external onslaught. Role of Sheikh Ahmad Sirhindi and others is noteworthy. Equality and social justice inspired conversions to Islam.

The British won over the Muslim rulers due to the industrial and scientific developments and modern war strategy. The War of Independence (1857) was a shattering setback to the Indian Muslims who were held responsible for the rebellion by the British. The Muslims were put into the backwardness with the help of Hindus. This was one of the outstanding motivations that paved the way to declare the separate identity of nationalism, the Muslim nationalism. The Muslim scholars sought to reform the teaching of Islamic law and to promote its application in a Muslim society. The prominent name among them is Sir Syed Ahmad Khan (1817-98) who awakened and guided his community well in time. His educational drive, the Ali-Garh movement, proved to be the best means of social mobility for the Muslim gentry under colonial rule.

In 1885 the Indian National Congress was founded to indicate the beginning of the Indian nationalist movement under the British. The Congress worked and helped the British rule. Sir Syed advised the Muslims not to join it because, he thought, the Muslims were not in position to involve into the anti-government activities. It has been argued that Sir Syed’s fear of Hindu domination sowed the seeds for the “Two Nations Theory” later espoused by the All-India Muslim League, founded in 1906 and led to its demand for a separate state for the Muslims of India. Sir Syed argued that modern education and non-political activities might be the key to Muslim advancement. The Ali-Garh movement produced educated leadership who could protect the Muslims’ rights on the Western political lines.

All India Muslim League had been founded in Dhaka to promote loyalty to the British and to protect and advance the political rights and interests of the Muslims of India. Thus the concept of

‘separate electorates’ was put forward to dawn a new day for the Indian Muslims.

The Muslims wanted to preserve and protect their distinct identity and advance their interests in India. They wanted to order their lives in accordance with their ideals and philosophy of life without being overwhelmed by an unsympathetic majority.

Initially, they demanded safeguards, constitutional guarantees and a federal system of government with powers to the provinces for protection and advancement of their heritage, identity and interests. Later, they demanded a separate state when neither the British nor the Hindu majority community was willing to offer those guarantees and safeguards.

Hindu revivalist movements turned more against the Muslims. Hindu nationalism was rival to the Muslim nationalism. The Indian nationalism forced Muslims to organize themselves politically to defend their interests effectively. After 1857, Hindi-Urdu Controversy was the major assault by the Hindus on Muslim heritage and legacy of the great Muslim Empire. Hindus were biased against Urdu as it was the Muslims’ language. They demanded Hindi as the official language replacing Urdu. There were demonstrations against Urdu by the Hindus in Banaras in 1867. It was the start of the Hindi-Urdu controversy. On the very issue, Sir Syed foretold about the unstable future of Hindu-Muslim unity. Hindus struggled vigorously to replace Urdu by Hindi in the offices. This enhanced the importance of the sense of Muslim separatism.

The Muslim nationalism is manifested with the sublime principles to implement like:

1. Rule of Law, socio-economic justice, equity and fair play.
2. Equality of opportunity to all citizens irrespective of caste, sect, religion or region.
3. Religious and Cultural tolerance.
4. Respect for human dignity and rights.
5. Protection of the rights and interests of non-Muslims and freedom to practice their beliefs and religions.