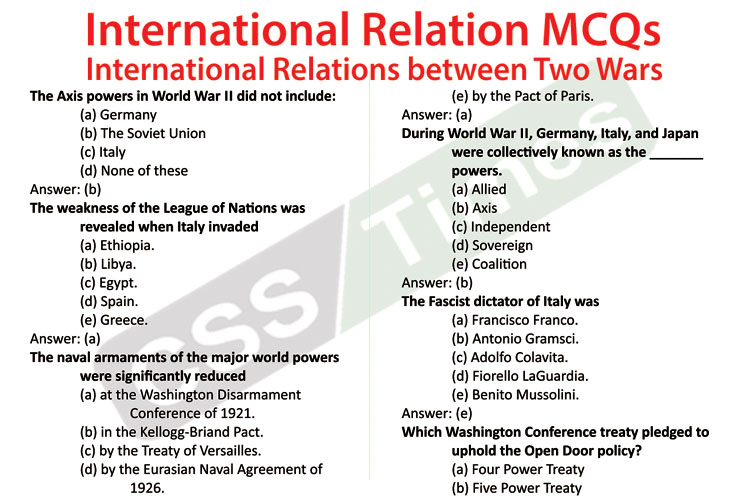 The Axis powers in World War II did not include:
(a) Germany
(b) The Soviet Union
(c) Italy
(d) None of these
Answer: (b)

The weakness of the League of Nations was revealed when Italy invaded
(a) Ethiopia.
(b) Libya.
(c) Egypt.
(d) Spain.
(e) Greece.
Answer: (a)

The naval armaments of the major world powers were significantly reduced
(a) at the Washington Disarmament Conference of 1921.
(b) in the Kellogg-Briand Pact.
(c) by the Treaty of Versailles.
(d) by the Eurasian Naval Agreement of 1926.
(e) by the Pact of Paris.
Answer: (a)

During World War II, Germany, Italy, and Japan were collectively known as the _______ powers.
(a) Allied
(b) Axis
(c) Independent
(d) Sovereign
(e) Coalition
Answer: (b)

The United States’ response to Japan’s invasion of Manchuria was
(a) to refuse to recognize Japan’s seizure of the territory.
(b) to blockade Japanese ports until Japan removed its forces.
(c) to sever diplomatic relations with Japan.
(d) to embargo all trade with Japan.
(e) declare war on Japan.
Answer: (a)

In the 1930s, support for pacifism was particularly strong among
(a) college students.
(b) the lower classes.
(c) high-ranking businessmen.
(d) members of Congress.
(e) labor unions.
Answer: (a)

The Senate Nye Committee hearings of the 1930s
(a) proposed complete United States disarmament.
(b) relied, in part, on the “merchants of death” thesis to explain n United States participation in World War I.
(c) condemned the Italian invasion of Ethiopia.
(d) called for an Anglo-American military alliance.
(e) oversaw early atomic research.
Answer: (b)

During the war, U.S.-Soviet relations were
(a) close and tranquil.
(b) constantly strained by significant ideological differences.
(c) totally uncooperative.
(d) hurt by the United States’ refusal to extend recognition to the Soviet Union as a cobelligerent.
(e) influenced by F.D.R.’s personal dislike for Stalin.
Answer: (b)

The Munich Conference considered Germany’s demands on
(a) the Rhineland.
(b) Austria.
(c) the Polish Corridor.
(d) the Sudeten region of Czechoslovakia.
(e) the Alsace.
Answer: (d)

The American fleet at Pearl Harbor was caught by surprise when Japan attacked because
(a) American intelligence had not been able to break the Japanese code.
(b) of faulty radar equipment.
(c) of human miscalculations and mistakes.
(d) F.D.R. conspired to get the United States into the war by provoking a Japanese attack.
(e) American intelligence had incorrectly decoded an intercepted message.
Answer: (c)

The Lend-Lease Act of 1941
(a) ensured the British easier access to American war supplies.
(b) placed restrictions on which materials the United States could ship to Great Britain.
(c) encountered almost no opposition from American congressmen.
(d) was proposed by American isolationists.
(e) was approved but never implemented.
Answer: (a)

With the outbreak of war in Europe in 1939, President Roosevelt
(a) immediately declared war on Germany.
(b) declared American neutrality.
(c) loaned massive quantities of war supplies to France and England.
(d) warned Germany that if France were attacked, the United States would declare war.
(e) made a secret pact with the French.
Answer: (b)