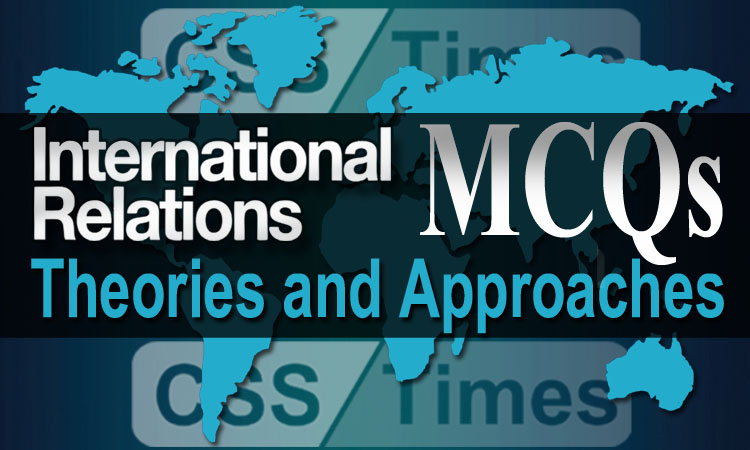 According to Aristotle state is _________
(a) A divine Institution
(b) An artificial creation
(c) A creation of force
(d) Natural institution
Answer: (d)

Which one of the following thinkers is associate with the idealist theory of state?
(a) Hobbes (b) Hegel
(c) J.S. Mill (d) Laski
Answer: (b)

Theory of realism is connected with _________
(a) Acquiring Power & security
(b) Theory of class war
(c) Theory of National Interest
(d) Theory of Behaviorism
Answer: (a)

What amongst the following is the main thrust of Neo-liberalism?
(a) To place market efficiencies as foundation for political freedom and to argue for a limited role for the State
(b) Commitment to an autonomous attitude to State, society and individual
(c) To accord priority to the will of the majority
(d)To extend power of a State beyond its borders
Answer: (a)

Neoliberals:
(a) Stress the importance of international institutions in reducing conflict in the international system.
(b) Are pessimistic above international operations.
(c) Agree with realists that are unitary actors.
(d) Both (a) and (c)
(e) None of these
Answer: (e)

Early liberalism stood for:
(a) Religious toleration
(b) Recognition of the divine of kings
(c) Everything medieval, both in philosophy and in politics
(d) Economic equality
Answer:. (a)

Apartheid is:
(a) An international brotherhood
(b) A policy of racial discrimination
(c) A medical term
(d) None of these
Answer: (b)

Neocolonialism is:
(a) The transfer of a colony from one colonial power to another
(b) The new round of colonization of Africa after Latin America gained independence
(c) Colonization which took place in the nineteenth century rather than eighteenth
(d) None of these
Answer: (d)

In the eyes of a radical feminist, gender equality can be achieved through:
(a) Gradual reform
(b) Getting more women elected in legislatures
(c) Challenging patriarchy
(d) Class struggle
Answer (c)

Which one of the following is not a principal postulate of liberal movement?
(a) Individual freedom
(b) Powerful state
(c) Rule of law
(d) Political rights
Answer. (b)

One of the foremost exponents of the negative view of Liberty in the twentieth century is:
(a) Isaiah Berlin
(b) C.W Macpherson
(c) John Rawls
(d) Charles Taylor
Answer. (a)

Feminism in International Relations advocates
(a) Women power
(b) Rights of women
(c) No power
(d) Duties of women
Answer: (b)

The concepts in International Relations are highly
(a) Gendered (b) Biased
(c) Unfair (d) Fair
Answer: (a)

The focus of intellectual enquiry for feminism is to _________ knowledge.
(a) Make (b) Deconstruct
(c) Construct (d) Demolish
Answer: (c)

The goal of Liberal feminism is to ensure _________ gender equality with men and women.
(a) Incomplete (b) Partial
(c) Complete (d) Always
Answer: (c)

According to Radical feminism personal is _________
(a) Political (b) Economic
(c) Important (d) International
Answer: (a)

Feminist Constructivism focuses on the study of how gender influences _________ politics.
(a) Global
(b) National
(c) Domestic
(d) Gender
Answer: (a)

Post Colonial Feminism focus on the need to study women’s _________ according to their social and cultural context.
(a) Role
(b) Position
(c) Subordination
(d) Issues
Answer: (c)

The images of war render the role of women as always
(a) Visible
(b) Invisible
(c) Important
(d) Negligible
Answer: (b)

Feminism sees security from the perspectives of
(a) Men
(b) Women
(c) All
(d) Both men and women
Answer: (b)

The concept of security is ______ to the discipline of International Relations
(a) Central
(b) Important
(c) Negligible
(d) Nothing
Answer: (a)

The feminist concern for security grows out of the centrality of
(a)Social relations
(b) International relations
(c) Gender relations
(d) No relation
Answer: (c)

What is the theme of 2016 International Day for the Elimination of Violence against Women?
(a) Orange your neighborhood
(b) Orange the world
(c) Orange the life
(d) Orange the people
Answer: (b)

Who among the following said that “post-behaviouralism was a genuine revolution, not a reaction; a becoming, not a preservation; a reform, not a counter reformation”?
(a) James Bryce
(b) Charles E. Merriam
(c) David Easton
(d) G.A. Almond
Answer: (c)

Who among the following said, ‘we cannot shed our values in the way we remove our coast’?
(a) Leo Strauss
(b) Alfred Cobban
(c) Jean Blondel
(d) David Easton
Answer: (d)

Which one of the following statements is not true?
(a) Marx drew distinction between ‘ideology’ and ‘science’.
(b) Napoleon denounced ideology as cloudy metaphysics that ignored history and reality.
(c) de Tracy coined the term ideology.
(d) Daniel Bell talked of ‘ideology without an end’.
Answer: (d)

For whom, ‘ideas’ and not the ‘material conditions of production’ are the effective causes of revolution?
(a) Karl Marx (b) Lenin
(c) Engels (d) Stalin
Answer: (b)

Which of the following statements is false with respect to Plato’s ideas?
(a) Division of functions does not rest on difference of aptitude.
(b) State is assumed to be merely individual writ large.
(c) Athenian women were not allowed to participate in politics.
(d) Ignorance and incompetence of politicians is the cause of democracy.
Answer: (a)

Which of the following is not an expression of the constitutional rule of Aristotle?
(a) Rule in public interest
(b) A lawful rule
(c) A Government of willing subjects
(d) Inconsistent with the dignity of the subjects
Answer: (d)

Who of the following said that felicity is “continued success in obtaining those things which a man from time to time desires”?
(a) Bentham (b) J.S. Mill
(c) Hobbes (d) Rousseau
Answer: (c)

Who of the following notes the existence of legislative, executive and federative powers of the state?
(a) Hobbes (b) Locke
(c) Rousseau (d) J. Bentham
Answer: (b)

Which of the following is not an idea of Rousseau?
(a) A thinking man is a depraved animal
(b) Science is the fruit of idle curiosity
(c) Philosophy is mere intellectual frippery
(d) General will is the sum total of wills
Answer: (d)

For J.S. Mill which one of the following is not true?
(a) Pleasures differ in quality
(b) The felicific calculus is absurd
(c) The Principle of utility is the final end of life
(d) Liberty consists in doing what one desires
Answer: (c)

For Karl Marx who among the following is not a Utopian socialist?
(a) St. Simon (b) Proudhon
(c) Fourier (d) Engels
Answer: (d)

Direct democracy is not possible in the modern times because–
(a) People are indifferent towards the affairs of state.
(b) Political parties are opposed to it.
(c) Propertied classes oppose it.
(d) Of the practical difficulties posed by the size and population of modern state.
Answer: (d)

Who among the following is associated with the concept of Realistic Liberalism?
(a) E.H Carr
(b) Robert Byrd
(c) George Kennan
(d) John H. Herz
Answer: (d)

Which one of the following books was written by E.H. Carr?
(a) The open society and its enemies
(b) Twenty years crisis
(c) Political Realism and Political Idealism
(d) The Realities of American Foreign Policy
Answer: (b)

Which of the following is not a form of National Power?
(a) Social Power
(b) Military Power
(c) Psychological Power
(d) Economic Power
Answer: (a)